Story Code : 1007561
Islam Times- Against all odds, this afternoon, Tuesday August 2, 2022, Ms. Pelosi, Speaker of the US House of Representatives arrived in Taipei, capital of Taiwan – which is part of the People’s Republic of China (PRC). See this as reported by the NYT as BREAKING NEWS.
All Global Research articles can be read in 51 languages by activating the “Translate Website” drop down menu on the top banner of our home page (Desktop version).

Follow us on Instagram and Twitter and subscribe to our Telegram Channel. Feel free to repost and share widely Global Research articles.
***
Against all odds, this afternoon, Tuesday August 2, 2022, Ms. Pelosi, Speaker of the US House of Representatives arrived in Taipei, capital of Taiwan – which is part of the People’s Republic of China (PRC). See this as reported by the NYT as BREAKING NEWS.

Ms. Pelosi is the highest ranking US official visiting Taiwan in 25 years.

Her visiting Taiwan happened despite the 2-hour phone conversation just a few days ago, between US President Biden and China’s President Xi Jinping. President Xi warned Biden: “Who plays with fire, will be burnt by fire.” Apparently to no avail.

What will be the consequences?
What is amazing though is the fact that China did not intervene in Ms. Nancy Pelosi’s visit. China could have scrambled a couple of military aircraft to guide Pelosi’s aircraft to a forced landing and then proceeding to arrest her. She entered Chinese territory without permission.

In the US, an illegal entry could end up with imprisonment.

Remember when in December 2018, Meng Wanzhou, chief financial officer of Huawei, was detained in Canada, at the request of the US. Ms. Meng Wanzhou was under house arrest by the Canadian authorities and freed by Canada after three years.
Why did China not apply similar standards for Ms. Pelosi?
It would have been a peaceful, yet extremely embarrassing situation for the United States.
China could have jailed her, or alternatively, in a gesture of good will, sent her straight back to Washington. 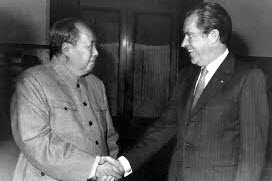 Or is this the first step to a much more serious escalation of a conflict that has been simmering and even flaring up ever-so-often?

China being a peace-loving nation, it will be interesting to observe how this conflict will pan out.

‘Every Place is Karbala’: How Muharram Teaches Us to Speak for Oppressed
By Syed Zafar Mehdi