Israel’s secret “Doomsday” Nuke base revealed by US

Story Code : 270798
Islam Times - A location and details of a top secret Israeli base which could be used to launch nuclear attacks on China or North America was published last week. Immediate moves were made to “spin” the story away.
The base, intended to house Intercontinental ballistic missiles (ICBMs) built in cooperation with India is also to include, not just a doomsday “Fuhrer-bunker” for Netanyahu and the Zionist elites but storage for nuclear, biological and chemical warheads as well.

According to intelligence sources in Pakistan, India is supplying Israel with missiles capable of carrying 10 MIRV (Multiple Independent-targetable Re-entry Vehicle) warheads each with a range of up to 11,000 miles. A single missile from this US financed complex could knock out all major population centers on America’s eastern seaboard.

The thermonuclear warheads and guidance systems for these advanced weapons were made possible through espionage activities tied to AIPAC, the American Israeli Public Affairs Committee.

Newspapers claim the underground base, one of a series being built across Israel, is part of an air defense system. This is, of course, utterly absurd.

Air defense systems are designed for stealth and mobility and never require huge underground facilities. Air defenses are meant to protect, not to “be” the primary target.

An Israeli program to use American funds earmarked for missiles defense on a nuclear command bunker and ICBM silos was “accidentally” exposed by the Department of Defense last week.

Detailed plans on the massive underground facility at Tel Shahar, intended to be Israel’s answer to NORAD’s Cheyenne Mountain fortress in Colorado, were made public when the US published over 1000 pages of documents, including key information on location, design and vulnerabilities to attack.


In an attempt to “put the genie back in the bottle,” Israel and key media assets in the west published deceptive and inaccurate accounts.

From SheeraFrenkel at McClatchy News, “The Obama administration had promised to build Israel a state-of-the-art facility to house a new ballistic-missile defense system, the Arrow 3. As with all Defense Department projects, detailed specifications were made public so that contractors could bid on the $25 million project. The specifications included more than 1,000 pages of details on the facility, ranging from the heating and cooling systems to the thickness of the walls.”

Until a week ago, Israel, in combination with Turkey and Arab “friends” was unassailable in the region due to its American equipped air force.

Russian President Vladimir Putin changed all that when Syria’s own S 300 air defense system came on line. Israel’s air forces are now useless against Syria, a nation scheduled to be “erased from the sands of time” by Israel, part of a multi-stage global strategy against Iran, a strategy to be coordinated with India against all of South Asia and the Caspian Basin.

America, either duped or fully complicit, has given Israel that capability, a “Samson option” first strike against any nation, even America.

One might want to ask why nuclear bunker facilities for up to 80,000 elites from among the “chosen people”are being financed by the United States, a project reminiscent of Dr. Strangelove.

The Arrow 3 missile system, designed to be a mobile launched high altitude missile interception much like the Russian designed S 300 system now active over Syria, was funded based on the unsubstantiated hypothesis that Iran’s nuclear program was, not only advanced, but that Iran would have small “missile deliverable” warheads soon.

Israel demanded the system as protection from Iranian nuclear missiles, which, according to a new IAEA report, may well never exist.

However, advance copies of the IAEA report due to be released on Monday, June 10, 2013, show that America’s intelligence assessments indicating Iran has no military nuclear program have been right all along.


The report cites that every “gram” of nuclear material has been accounted for and none has been transferred to weapons related programs.

“Nuke pundit,” David Albright is typically the source for all information used to substantiate claims of nuclear weapon development by Iran. To check on Albright’s credentials, we went to Clinton Bastin, an editor at Veterans Today and former chief nuclear weapons designer for the US Department of Energy.

In a 2011 interview with Jim W. Dean, Bastin said the following about his friend and longtime associate, David Albright, “David Albright, a physicist, former colleague, president of the non-government Institute for Science and International Security in Washington and a former consultant for IAEA inspectors, is recognized by the US news media as an expert on nuclear weapons but is not. I called David several months ago to correct inaccurate information attributed to him by New York Times reporter William J. Broad.

I also mentioned that Pakistan probably did not have many nuclear weapons because gun-type weapons require about 100 pounds of highly enriched uranium. David said that he had seen drawings of Pakistan’s weapons and they had solid cores but were implosion, not gun-type. With that statement, I realized that David did not understand basic concepts of nuclear weapons.”

Bastin went on further and pointed out that controls long in place in Iran made it impossible for any nuclear material to have been “redirected” and that Iran’s program to enrich uranium gas to 20% could never realistically result in weapons grade material.

Both the US and Israel have known all of this all along, know this and have lied about it.

The Arrow III missile system was debuted on February 13, 2013 on the front page of the Jerusalem Post. This system, designed, at least as the American people are told, is depicted in a full color graphic showing the following components:

Note that every component includes a “vehicle.” What, exactly, goes into the “Fuhrer-bunker” that we are told houses the Arrow III system?

When the press films or photographs a launch of an “Arrow” missile, they carefully include only the top portion of the mobile launching tube. Do they wish us to believe that, somehow, these tubes are hundreds of feet below the earth?

Can they keep “cropping” photos forever?

Thus far, the controlled press seems to miss story after story. Recently, the same press when photographing Senator John McCain on his secret trip into Syria forgot to “crop out” the Al Qaeda commanders McCain met with.

The underground “Temple of Doom”

Back in 2001, Secretary of Defense Donald Rumsfeld appeared on television with media pundit Tim Russert. Rumsfeld told a worldwide audience of the secret bunker complexes that spread across Afghanistan, able to house thousands, interconnected with secret monorails, undetectable by air.

Thirteen years later, the US forces have yet to find one of these bunkers. They never existed.

The ones in Israel, however, do exist. Anyone capable of downloading an “online” bid specification can see the scope of these massive projects, conclusive proof that preparations for “doomsday” are underway in Israel.

A careful read of the “material handing” specifications is rather curious. Israel denies having nuclear weapons. No American president has ever admitted knowing of such things, a question former White House correspondent Helen Thomas has asked of every American president prior to the untimely end of her outstanding career.

Now even school children with their iPhones can read about Israel’s underground nuclear weapons storage, about equipment for storing, protecting and deploying nuclear weapons.

What they may not know is that the money that might have helped finance their college education paid for this highly secret and equally highly illegal equipment.
Share It :
Related Stories 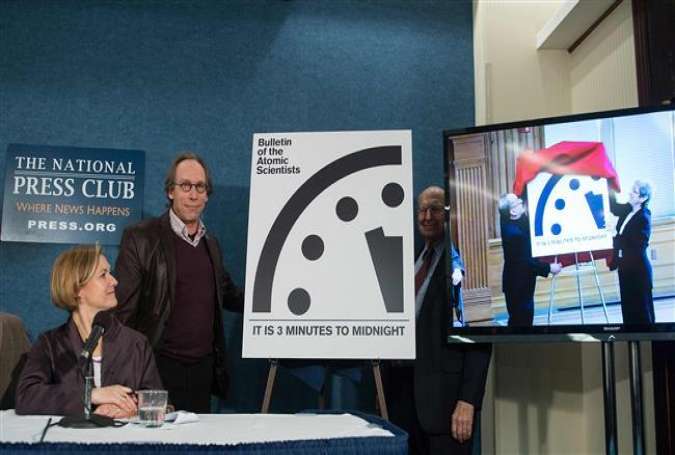