Story Code : 276521
Islam Times - According to the Washington Post, US President Barack Obama has a diffuse strategy in Syria. He has decided to arm the opposition to Assad, but, at the same time, he claims to be looking for a political solution.
The newspaper pointed out that Obama wants to reinforce what he considers the “moderate armed opposition” -which is led by Gen. Salim Idriss, chief of the so-called Free Syrian Army (FSA)- and wants to make it "strong enough" to negotiate with the other camp during the period of political transition, which could be opened as a result of the Geneva Conference II.

Obama's second objective is to deal with Hezbollah and other pro-Iranian groups, which are active in Syria. The third aim of this strategy, according to the Washington Post, is to cut off military and financial support for al-Qaeda-linked armed groups, which are considered “extremist and dangerous”.

For the US administration, the control that these extremist groups exercise on the whole armed opposition is an undesirable and disturbing fact because they also endanger some pro-American regimes in the region, especially the Jordanian one, which is currently on a tightrope. This is why Obama seeks to promote Idriss, even though his successes have been practically nil as a military leader.

The world rejects the alleged "evidence" on the chemical weapons
The first problem for the US administration, however, is that, according to the Washington Post, the pretext used by Obama to arm the Syrian opposition, the alleged use of chemical weapons by Damascus, has convinced nobody, since everyone knows the reality due largely to the alternative media and the Internet. "Western officials and diplomats have also acknowledged that the lack of transparency has undermined the credibility of the chemical-weapons claims”, the paper said.

The Washington Post itself published a few days ago an article by two experts, Joby Warrick and Colum Lynch, which claimed that “there is no reliable way to assess the authenticity" of the samples submitted by the US government to the countries of the Security Council as “evidence”. The article added that Obama's own statements on the establishment of "a red line with respect to chemical weapons in Syria was a powerful incentive for the opposition to fabricate such evidence."

“If you are the opposition and you hear” that the White House has drawn a red line on the use of nerve agents, then “you have an interest in giving the impression that some chemical weapons have been used,” said Rolf Ekeus, a Swedish scientist who headed up UN weapons inspections in Iraq during the 1990s.

Jean Pascal Zanders, who was until recently a research fellow at the European Union Institute for Security Studies, said that he scoured the Internet for photos, videos and reports on the “evidence” of the alleged chemical attacks by the Syrian government and what he saw “made him a skeptic.”

Sectarian conflict
Since the victory of the Syrian Army and Hezbollah in Al Qussair, the US administration is working on another plan to trigger a sectarian conflict between Sunni and Shiite Muslims. In this regard, Idriss claimed following the defeat of the armed groups in that town, that “5,000 Hezbollah troops” had participated in the operation. Other opposition leaders also made anti-Shiite statements.

The US hope is “to obtain the support of all components of the opposition for Salim Idriss,” the Post said, adding that when Washington believes that Idriss has achieved such power, then it will work to oust Assad and prevent, at the same time, the repetition of what happened in Iraq, where the US invaders created a political vacuum after the fall of Saddam Hussein, and this ultimately led to dire consequences for themselves. The article concludes: “If the Americans want to avoid the emergence of a takfiri Syria, Idriss needs to become a strong political leader who will win the hearts and minds of the Syrians.”

Miscalculations
However, the US strategy is based on calculations that could be wrong.

First, the individuals whom Washington supported in Iraq demonstratively lacked popular support and there is no reason to think that this would be different in Syria. The plan to promote a figure like Idriss, who enjoys the open support of the US administration, may become a difficult or impossible mission because Syrian people see Idriss as a puppet of the American government. Moreover, Idriss is far from being a conciliatory personality, as evidenced by his public attacks and insults against Shiites.

On the other hand, nothing indicates that extremist groups will be weaker. They have weapons and money and, according to the examples of Afghanistan and Libya, US-backed organizations and individuals always lose their power to groups that are more radical or have religious references. To this it must be added that the Syrian opposition is fragmented into infinite groups and currents, and it also applies to armed gangs.

It should be noted that shipments of arms sent by Saudi Arabia to Aleppo have fallen into the hands not only of the FSA, but also of the Nusra Front. Both groups cooperate on the ground and also sell and exchange weapons with each other. Furthermore, Riyadh and Doha support takfiri groups in the belief that this will serve to neutralize Iran's influence in Syria.

It is also noteworthy to point out that the FSA is made up of militants who are no less fanatic than those of the Nusra Front. In fact, many of the most heinous crimes and attacks on religious symbols that have occurred in Syria in recent months have not been the work of the Nusra Front, but of the FSA.

Finally, the use of sectarianism has its risks, especially the spreading of the conflict to Iraq, where the same gangs that operate in Syria continue to carry out terrorist attacks against Shiites and moderate Sunnis. A reaction of the latter against those takfiri extremist groups in Iraq but also in Syria cannot be ruled out. Thus, Washington is engaging in a dangerous conflict against the Shiite community and much of the Sunni world that rejects takfiris positions, as well as against other minorities such as Syrian Alawites or Christians.

On the other hand, Russia is not willing to lose its influence in Syria and let the US take over that country. Russian Foreign Minister Sergei Lavrov has already warned that Moscow does not intend to allow the Geneva Conference II to have a predetermined outcome or to result in a "capitulation" of the Syrian government to armed groups supported by Washington and its puppets.

Today, Bashar al Assad remains the only force capable of keeping Syria united as well as giving it stability and maintaining a state that affords protection to all faiths. The alternative would be a situation of chaos and disintegration, in which the power would fall into the hands of fanatic extremists or puppets at the service of the American empire. This situation could result in a genocide against religious minorities. In fact, some criminal acts committed by groups such as Takfiris, including the FSA, attest to that genocial move.

It is hoped, that Syria will be able to thwart the plans of the US and its Arab puppets against Damascus to save the country.
Share It :
Related Stories 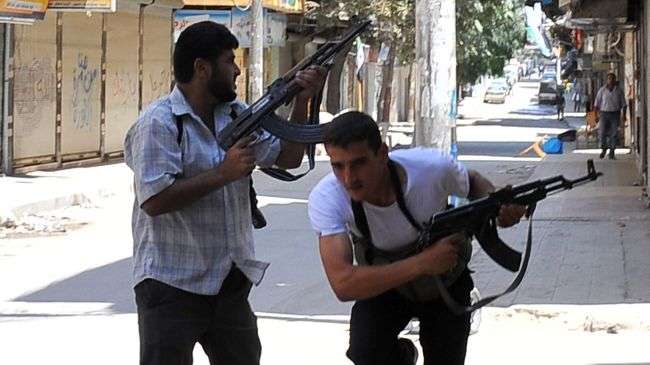