Story Code : 350798
Islam Times - Foreign Minister Julie Bishop says she is “deeply concerned” by reports Israeli armed forces are removing Palestinian children from their homes in night-time raids.
Unlike the previous Labor government, Ms Bishop has refused to condemn Israeli settlements, and has not altered her position following the airing of the disturbing footage on ABC television on Monday night. Nor would the Foreign Minister commit to registering her concerns directly with the Israeli government.


“I am deeply concerned by allegations of the mistreatment of Palestinian children,” Ms Bishop told Fairfax Media on Tuesday.

In November, the Abbott government quietly swung its support further behind Israel at the expense of Palestine, giving tacit approval to controversial activities including the expansion of Jewish settlements in the occupied territories.

Many within the international community regard the expansion of Israeli settlements as an act of hostility towards Palestinians, hampering the likelihood of peace. But Ms Bishop told an Israeli newspaper recently that she would like to see which international law Israel had broken with the settlements.

On Tuesday, Ms Bishop was responding to a joint investigation by Four Corners and The Australian newspaper, which examined the treatment of Palestinian children in Israeli military courts.

The program featured interviews with Palestinian children and teenagers who say they were pulled out of their homes in night-time raids and interrogated for alleged crimes such as throwing stones at Israeli soldiers.

One child, Qsai Zamara, said the Israeli army took him from his bed in the middle of the night and took him to prison, where he was whipped and forced into a false confession.

"There was this big machine with all the electric wires in it, connected to the electricity. He wanted to give me electric shock with it," he said.

The Israeli government has committed publicly to reviewing these controversial practices.

The previous Labor government made representations through the Israeli embassy, to register Australia's concerns about the armed forces' mistreatment of Palestinian children in the West Bank.

Then-foreign minister Bob Carr says he raised the issue in a meeting he had with Israel's Foreign Minister Avigdor Lieberman.

But the Abbott government has swung sharply behind Israel, reiterating the strong supportive policies of the Howard government.

Several Coalition frontbenchers known to be sympathetic to the Palestinian cause have been silent since taking office in September.

The former leader of the parliamentary Friends of Palestine group, frontbencher Sussan Ley, refused to comment on her government's position on Palestine or on the latest reports. Nor would Treasurer Joe Hockey make any comment, despite speaking passionately about his Palestinian heritage while in opposition.

A UN resolution, which Australia no longer supports, calls for "prevention of all acts of violence, destruction, harassment and provocation by Israeli settlers, especially against Palestinian civilians and their properties".

While 158 countries supported the UN in calling for an end to Israeli settlements, Australia joined eight other countries, including South Sudan and Papua New Guinea, in abstaining from voting.

The Abbott government has also indicated it no longer believes Israel, as an "occupying power", should be forced to comply with the 1949 Geneva Conventions.

The president of the Executive Council of Australian Jewry, Robert Goot, said the Four Corners program “highlighted a number of disturbing issues, which the Israeli government appears clearly to treat seriously”.

But Mr Goot noted that the program “paid insufficient attention to the very real difficulties faced by those who have the job of maintaining law and order and to the suffering on both sides”.

"As a matter of urgency, Foreign Minister Julie Bishop should reiterate Australian concerns about the mistreatment of children immediately with the Israeli Foreign Minister."
Share It :
Related Stories 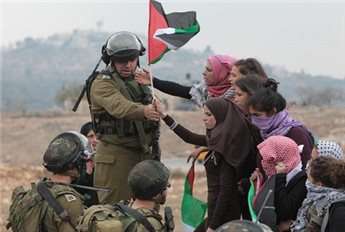