By Tony Cartalucci
Story Code : 450687
Islam Times - The "proxy war" model the US has been employing throughout the Middle East, Eastern Europe, and even in parts of Asia appears to have failed yet again, this time in the Persian Gulf state of Yemen.
Overcoming the US-Saudi backed regime in Yemen, and a coalition of sectarian extremists including Al Qaeda and its rebrand, the "Islamic State," pro-Iranian Yemeni Houthi militias have turned the tide against American "soft power" and has necessitated a more direct military intervention. While US military forces themselves are not involved allegedly, Saudi warplanes and a possible ground force are.

Though Saudi Arabia claims "10 countries" have joined its coalition to intervene in Yemen, like the US invasion and occupation of Iraq hid behind a "coalition," it is overwhelmingly a Saudi operation with "coalition partners" added in a vain attempt to generate diplomatic legitimacy.

The New York Times, even in the title of its report, "Saudi Arabia Begins Air Assault in Yemen," seems not to notice these "10" other countries. It reports:

Saudi Arabia announced on Wednesday night that it had launched a military campaign in Yemen, the beginning of what a Saudi official said was an offensive to restore a Yemeni government that had collapsed after rebel forces took control of large swaths of the country.

The air campaign began as the internal conflict in Yemen showed signs of degenerating into a proxy war between regional powers. The Saudi announcement came during a rare news conference in Washington by Adel al-Jubeir, the kingdom’s ambassador to the United States.

Iran's interest in Yemen serves as a direct result of the US-engineered "Arab Spring" and attempts to overturn the political order of North Africa and the Middle East to create a unified sectarian front against Iran for the purpose of a direct conflict with Tehran. The war raging in Syria is one part of this greater geopolitical conspiracy, aimed at overturning one of Iran's most important regional allies, cutting the bridge between it and another important ally, Hezbollah in Lebanon.

And while Iran's interest in Yemen is currently portrayed as yet another example of Iranian aggression, indicative of its inability to live in peace with its neighbors, US policymakers themselves have long ago already noted that Iran's influence throughout the region, including backing armed groups, serves a solely defensive purpose, acknowledging the West and its regional allies' attempts to encircle, subvert, and overturn Iran's current political order.

The US-based RAND Corporation, which describes itself as "a nonprofit institution that helps improve policy and decision making through research and analysis," produced a report in 2009 for the US Air Force titled, "Dangerous But Not Omnipotent : Exploring the Reach and Limitations of Iranian Power in the Middle East," examining the structure and posture of Iran's military, including its Islamic Revolutionary Guard Corps and weapons both present, and possible future, it seeks to secure its borders and interests with against external aggression.

The report admits that:

Iran’s strategy is largely defensive, but with some offensive elements. Iran’s strategy of protecting the regime against internal threats, deterring aggression, safeguarding the homeland if aggression occurs, and extending influence is in large part a defensive one that also serves some aggressive tendencies when coupled with expressions of Iranian regional aspirations. It is in part a response to U.S. policy pronouncements and posture in the region, especially since the terrorist attacks of September 11, 2001. The Iranian leadership takes very seriously the threat of invasion given the open discussion in the United States of regime change, speeches defining Iran as part of the “axis of evil,” and efforts by U.S. forces to secure base access in states surrounding Iran.

Whatever imperative Saudi Arabia is attempting to cite in justifying its military aggression against Yemen, and whatever support the US is trying to give the Saudi regime rhetorically, diplomatically, or militarily, the legitimacy of this military operation crumbles before the words of the West's own policymakers who admit Iran and its allies are simply reacting to a concerted campaign of encirclement, economic sanctions, covert military aggression, political subversion, and even terrorism aimed at establishing Western hegemony across the region at the expense of Iranian sovereignty.

The unelected hereditary regime ruling over Saudi Arabia, a nation notorious for egregious human rights abuses, and a land utterly devoid of even a semblance of what is referred to as "human rights," is now posing as arbiter of which government in neighboring Yemen is "legitimate" and which is not, to the extent of which it is prepared to use military force to restore the former over the latter.

The United States providing support for the Saudi regime is designed to lend legitimacy to what would otherwise be a difficult narrative to sell. However, the United States itself has suffered from an increasing deficit in its own legitimacy and moral authority.

Most ironic of all, US and Saudi-backed sectarian extremists, including Al Qaeda in Yemen, had served as proxy forces meant to keep Houthi militias in check by proxy so the need for a direct military intervention such as the one now unfolding would not be necessary. This means that Saudi Arabia and the US are intervening in Yemen only after the terrorists they were supporting were overwhelmed and the regime they were propping up collapsed.

In reality, Saudi Arabia's and the United States' rhetoric aside, a brutal regional regime meddled in Yemen and lost, and now the aspiring global hemegon sponsoring it from abroad has ordered it to intervene directly and clean up its mess.

The aerial assault on Yemen is meant to impress upon onlookers Saudi military might. A ground contingent might also attempt to quickly sweep in and panic Houthi fighters into folding. Barring a quick victory built on psychologically overwhelming Houthi fighters, Saudi Arabia risks enveloping itself in a conflict that could easily escape out from under the military machine the US has built for it.

It is too early to tell how the military operation will play out and how far the Saudis and their US sponsors will go to reassert themselves over Yemen. However, that the Houthis have outmatched combined US-Saudi proxy forces right on Riyadh's doorstep indicates an operational capacity that may not only survive the current Saudi assault, but be strengthened by it.

Reports that Houthi fighters have employed captured Yemeni warplanes further bolsters this notion - revealing tactical, operational, and strategic sophistication that may well know how to weather whatever the Saudis have to throw at it, and come back stronger.

What may result is a conflict that spills over Yemen's borders and into Saudi Arabia proper. Whatever dark secrets the Western media's decades of self-censorship regarding the true sociopolitical nature of Saudi Arabia will become apparent when the people of the Arabian peninsula must choose to risk their lives fighting for a Western client regime, or take a piece of the peninsula for themselves.

Additionally, a transfer of resources and fighters arrayed under the flag of the so-called "Islamic State" and Al Qaeda from Syria to the Arabian Peninsula will further indicate that the US and its regional allies have been behind the chaos and atrocities carried out in the Levant for the past 4 years. Such revelations will only further undermine the moral imperative of the West and its regional allies, which in turn will further sabotage their efforts to rally support for an increasingly desperate battle they themselves conspired to start.

It was just earlier this month when the United States reminded the world of Russia's "invasion" of Crimea. Despite having destabilized Ukraine with a violent, armed insurrection in Kiev, for the purpose of expanding NATO deeper into Eastern Europe and further encircling Russia, the West insisted that Russia had and  still has no mandate to intervene in any way in neighboring Ukraine. Ukraine's affairs, the United States insists, are the Ukrainians' to determine. Clearly, the US meant this only in as far as Ukrainians determined things in ways that suited US interests.

This is ever more evident now in Yemen, where the Yemeni people are not being allowed to determine their own affairs. Everything up to and including military invasion has been reserved specifically to ensure that the people of Yemen do not determine things for themselves, clearly, because it does not suit US interests.

Such naked hypocrisy will be duly noted by the global public and across diplomatic circles. The West's inability to maintain a cohesive narrative is a growing sign of weakness. Shareholders in the global enterprise the West is engaged in may see such weakness as a cause to divest - or at the very least - a cause to diversify toward other enterprises. Such enterprises may include Russia and China's mulipolar world. The vanishing of Western global hegemony will be done in destructive conflict waged in desperation and spite. 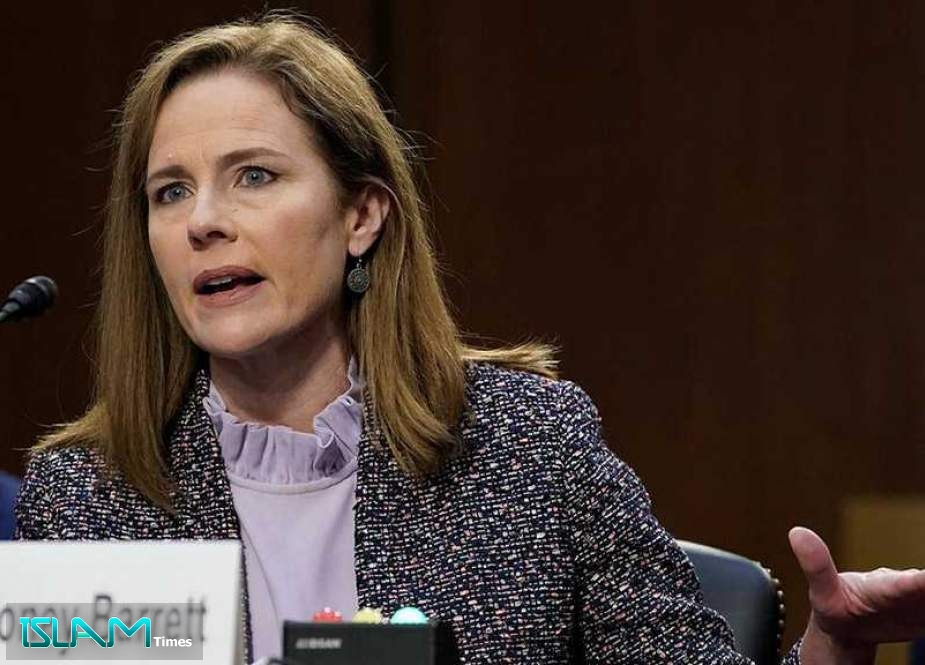 US Democrats to Boycott Committee Vote on Barrett’s Supreme Court Nomination
Islam Times - Democrats in the upper chamber of US Congress are set to boycott a committee vote on Amy Coney Barrett's Supreme Court nomination.
US Approves $1.8bn in Potential Arms Sales to Taiwan
US Election Night Will Be Marred by Turbulence, Chaos
US Expands Nord Stream 2 Sanctions
US Officials Make Efforts to Free US Citizens, Damascus Demands Full Withdrawal: WSJ
US Navy Finds New COVID-19 Cases Aboard Previously Virus-Stricken USS Theodore Roosevelt
US Federal Budget Deficit Soars to Record $3.1 Trillion
US Does not Dare to Face Military Confrontation with Iran
Comment
Iran Slams Israel’s ‘Institutionalized’ Discrimination against Palestinians
Chinese Leader Xi Jinping Sends Warning to US
As US Empire Disintegrates, It Becomes more Threatening
Deputy Commander: IRGC Surprises Waiting for Aggressors
Fiancee of Khashoggi Sues Saudi Crown Prince in US
Thailand Lifts Protest Ban that Backfired
NATO Chickens Home to Roost
Railway Station in Lyon, France Evacuated Over Reported Bomb Threat
Gunshots Heard in Lagos, Nigeria as Prison Reportedly Set on Fire
«Israel» Detains Child in Night Raid in Occupied WB
Report: Emirati Minister Accused of 'Serious Sexual Assault'
Envoy: Russia to Respond to US Missile Deployment in Asia Pacific
Fearing Being Killed by Iran or Saudis… MBS Not to Normalize Ties with ‘Israel’ Now!
Iranian Military to Hold Drills that Test the Most Developed Weapons
Russia Says Not Afraid of US Sanctions, Will Resume Military Cooperation with Iran
Mossad Chief: Our Relations with Saudi Arabia Is Not Subject to Any Condition Or Obstacle
China Warns US It May Detain Americans over Prosecutions
Saudi Arabia Says Believes in ‘Eventual Normalization’ with Israel
As US Empire Disintegrates, It Becomes more Threatening
45 Lawmakers Urge US to Boycott Saudi-hosted G20 Summit
Featured Stories