The deal of the century: Greater Israel

By: Dr Amira Abo el-Fetouh
Story Code : 793873
Islam Times - The year 2017 refused to end before the 100th anniversary of the cursed Balfour Declaration was crowned with Trump’s cursed declaration, recognising Jerusalem as the unified capital of Israel and promising to move the American embassy to the city.
This decision is no less of a disaster than the Balfour Declaration. It is a cursed day in the history of the Arab and Muslim nations, just like 2 November 1917, the day that Arthur James Balfour sent a letter to Lord Lionel Walter Rothschild, a leader of the international Zionist Movement, expressing the British government’s support of the establishment of a Jewish homeland in Palestine.

This is a promise made by those who do not have the right to make this promise to those who do not deserve it. The Jewish population in Palestine at the time was no more than 50,000, while the total Jewish population in the world was 12 million at the time. They only represented five per cent of the total indigenous Palestinian people, who have lived in the land for thousands of years, with a population of 650,000. However, this promise neglected them and only recognised a fraction of their political, economic and administrative rights.

While the Balfour Declaration recognised the right of the Jewish people to establish a national homeland in Palestine, more dangerous and more important is the Versailles Peace Conference held in 1919, which resulted in an agreement between Prince Faisal, representing the Kingdom of Hijaz, and Dr Chaim Weizmann, representing the Zionist Organisation. This agreement included clauses that disregard Palestinian rights and reinforce the Jewish presence in Palestine, such as the following article: “All necessary measures shall be taken to encourage and stimulate immigration of Jews into Palestine on a large scale, and as quickly as possible to settle Jewish immigrants upon the land through closer settlement and intensive cultivation of the soil. In taking such measures the Arab peasant and tenant farmers shall be protected in their rights and shall be assisted in forwarding their economic development.”

The agreement acted opened the door to Palestine to Jews all across the world to gather, and they accepted the invitation and we witnessed Jewish immigrants from all across the world to flock to Palestine. Over 70 nationalities poured into the Jewish melting pot, and this was the first step to establishing a Jewish entity. The Balfour Declaration was the legal document the international Zionist Movement referred to in order to back its demand for a Jewish state in Palestine and the realisation of the Jewish dream, and indeed their dream did come true with the establishment of Israel on 15 May 1948. This state was granted UN membership by means of pressure from the global superpowers, making Israel the first country in the history of the international political system to be established on stolen land after its indigenous people were expelled from their country. The state also receives international backing and unprecedented support from the largest country in the world, the US, which has allowed Israel to act arrogantly in the region, wage wars, expand and seize more Palestinian and Arab land. The state also tortures the Palestinians remaining in Palestine mercilessly and inhumanely.

I will not go too far into history or into the reasons that led Great Britain to establish Israel, as well as the reasons behind the unlimited Western support for the state, as whatever humanitarian or religious justifications that have been given are all false and misleading, aiming to whitewash the Western imperialist project called Israel. It was planted in the region in order to serve the Western colonial interests, and at the time, Israel was called the watchdog in the area.

Shortly before the anniversary of the Balfour Declaration, the region’s watchdog bombed one of the resistance’s tunnels in Gaza, leading to the death of 12 mujahedeen. It was as if it was trying to provoke the Palestinian resistance and see its reaction, putting it under a difficult test amid the atmosphere of the painful anniversary.

This provoked the pains and sparked the flames of anger within the souls of the people. It stirred the dream of liberation, which was never abandoned by Hamas since the moment it was established. However, now, it is restricted by a cursed agreement, no less cursed than the Balfour Declaration, known as the Palestinian reconciliation agreement, in which Hamas conceded its authority over Gaza and handed over control of the crossings to the PA president, whose term was over years ago. He, like his friend Netanyahu, chose the atmosphere surrounding the Balfour Declaration anniversary to take over control of Gaza, in a shameful celebration in which his pictures and the pictures of Al-Sisi were hung, portraying him as the victor who has regained control of the crossings from occupying invaders, and not taking over from fellow Palestinians whom he signed a national reconciliation agreement with based on partnership. This caused shock in the ranks of Hamas and complete silence on the part of the movement’s leaders.

This indicates the truth behind this ominous reconciliation, which was clearly manufactured inside the Israeli intelligence agencies to serve Israel, not the interests of the national Palestinian unity, as they claim. After eliminating Hamas from the political scene, they now want to declaw the movement and strip it of all its sources of power. The true purpose of the reconciliation is to disarm Hamas and for it to be under the control of the PA. Abu Mazen explicitly stated this on several occasions, and it aligns with the Israeli desire voiced by Netanyahu, making it easier to integrate the movement with the PA, on the settlement path imposed by the US administration, and adopted by several Arab parties. This settlement path includes normalisation with Israel as part of the deal of the century scenario, which began with the declaration of Jerusalem as Israel’s capital.

This is the true dilemma that Hamas put itself in by means of the suspicious reconciliation agreement, full of traps that were clear to everyone. I do not think that Hamas couldn’t see them, but I believe that Yahya Sinwar, head of Hamas in Gaza, who has made many concessions to Fatah, more than it was demanding, thanks to which it received many gains that tempted it to impose its own conditions and adopt a stubborn position, sees a way out of this dilemma, which we believe will be very difficult. The first option is Hamas remains a resistance movement and stands against the Oslo trend with all its might, as well as rectify the strategic mistake it made, which has become a very difficult task given the fact that it is under the control of the Egyptian intelligence. This will also be difficult given Al-Sisi’s openly hostile position towards the movement, as he will not allow Hamas to repeat the 2007 scenario. The second option is that Hamas becomes a chapter in the history of the Palestinian resistance, which began in the 1920’s, and a new resistance is born, carrying the torch of resistance in order to liberate Palestine from the river to the sea.

While the Balfour Declaration of 1917 granted the Jewish people a national homeland in Palestine, the Trump declaration of 2017 granted Israel the entire Arab nation and achieved the dream of Greater Israel, from the Nile to the Euphrates, by means of the deal of the century.
Share It :
Related Stories 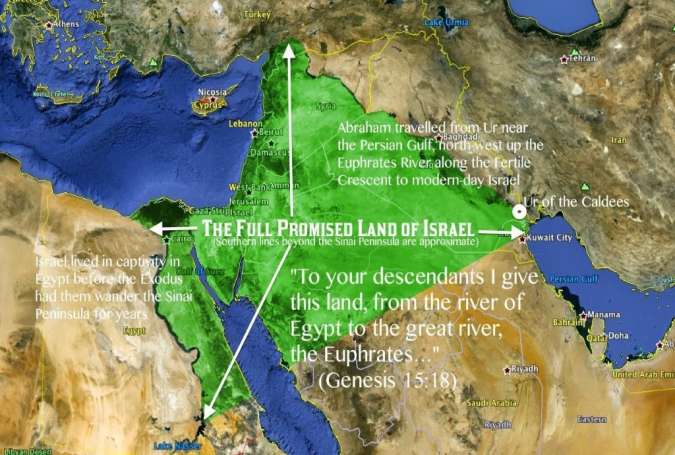 Welcome to Greater Israel!
Islam Times - While the presidential campaign was still in progress it was possible to think that there might be some positive change in America’s broken foreign policy.
Likely attack on Syria is a preface for greater Israel, says Moosavi
The deal of the century
“The Deal of the Century”: Dead on arrival!
“The Israeli Dream”: The Criminal Roadmap Towards “Greater Israel”?
What Will Happen with the Deal of the Century Ultimately?

"The Marches of Return and the Deal of the Century": the Palestinian marcher turns the table on the deal
The One State/Two State Debate is Irrelevant as Israel and the US Consolidate Greater Israel
Comment
How IRGC's Buried Ballistic Missiles Tear Up Ground to Become Iran's New Surprise Weapon
Merkel Opposes US Plan to Withdraw Troops from Germany
Arab Media: SDF Recruiting Forces among Minus-18 Girls
Iraqi Telecommunication Firm Accused of Collaboration in General Soleimani’s Assassination
Wadi Al-Oyoun: Where Hezbollah Fighters Humiliated Israeli Invaders in 2006 July War