Inside Chinese camps thought to be detaining a million Muslim Uighurs

Story Code : 820463
Islam Times- “Our center is to prevent terrorism thoughts from happening,” the director of one of the centers tells NBC News.
In a classroom in far western China, a dozen adults wearing white lab coats sit at a long table, textbooks on animal husbandry open in front of them.

The din of chickens and geese and a bucolic mural of cows belie the fact that the students are in one of a vast network of camps in Xinjiang, a region that is home to more than 10 million Muslim Uighurs. Around 10 percent of the Uighur population of Xinjiang is locked up, according to the U.S. government and human rights organizations. The Chinese Communist Party maintains these centers are a crucial part of its effort to counter terror, extremism and separatism.

Bu’ayixiemu Abulizi, director of the Moyu County Vocational Education and Training Center in Hotan Prefecture in the southwestern corner of Xinjiang, made it clear the role of the centers is to change the minds and thoughts of those who are forced to live there.

International rights groups charge that Chinese authorities are actually engaging in mass arbitrary detention, torture and mistreatment of Uighurs in Xinjiang. Human Rights Watch, a nonprofit group based in New York, has alleged “rampant abuses,” including torture and unfair trials of the population.

Gay McDougall, a member of the United Nations Committee on the Elimination of Racial Discrimination, accused China last year of turning Xinjiang into “something resembling a massive internment camp that is shrouded in secrecy, a sort of no-rights zone.”

The Chinese government gave NBC News rare access to three of what it calls “vocational education and training centers” where they say Uighurs receive lessons in law and culture, Mandarin, and skills like shop-keeping, hospitality, animal husbandry and e-commerce.

Government minders brought NBC News to two camps in Hotan Prefecture and one in Kashgar, in the northwest of the province. NBC spoke to the director of each camp, and Uighur detainees were made available for interviews, always with government and camp officials present.

At the camps NBC News visited, dormitories were sparsely furnished with few personal possessions. Some classrooms were equipped with computers and others with musical instruments. It is impossible to know whether conditions in the camps were changed or improved for the purpose of NBC’s visit, or whether conditions in other camps are similar.

The government did not answer NBC News’ questions on how many centers there are in the region, how many people have passed through them or how many are currently being held there. The Australian Strategic Policy Institute, a nonpartisan think tank, estimates that there are 143 camps currently detaining Uighurs 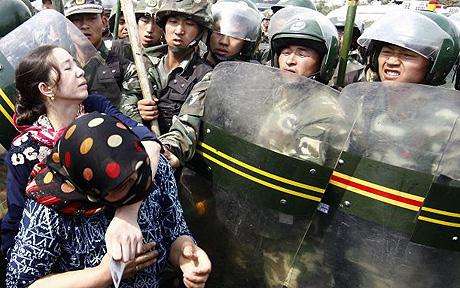 What if the Uighurs were Christian Rather than Muslim?
According to The New York Times this morning, violent clashes between Chinese government forces and Muslim Uighurs -- that country's long-oppressed minority -- have left at least 140 people ...
Ankara rejects China claims on sending Uighurs to ISIL
Turkey's Erdogan in China amid tensions over Uighurs
China protests Turkey’s settlement of Muslim Uighurs
Comment
Two Iranian Border Guards Killed in Clashes with Terrorists in Southeast
Israeli Occupation Forces Shot and Killed a Palestinian in Al-Quds
Sanders Slam Russia for Reportedly Meddling in US 2020 Elections
What We, the Taliban, Want
With Bloomberg Entering Race, U.S. Oligarchy Takes Stage
China To Maintain Close Communication and Cooperation with Iran to Defeat the Coronavirus
US ‘Playing Games’ With Taliban Peace Talks, Has ‘No Intention of Leaving Afghanistan’ - Academic
Russia Rejects Allegations It Carried Out Cyber Attack on Georgia
More than 10,000 Civilian Casualties in Afghan War in 2019: UN
Process of Vote Counting in Iran is Underway and Final Results Could Be Announced by Sunday
Creator Of BioWeapons Act Says Coronavirus Is Biological Warfare Weapon
People Rejoice as Syrian Army further Secure Aleppo Countryside