Trump’s Peace Plan: A Realistic Solution or a Final Solution?

Story Code : 842131
Islam Times - “A realistic solution would give the Palestinians all the power to govern themselves but not the powers to threaten Israel.” – Peace to Prosperity
On Tuesday, January 28, 2020, impeached US President Donald Trump, standing with indicted Israeli entity prime minister Benjamin Netanyahu, announced his much-vaulted “deal of the century” peace plan for Palestine.  Called “Peace to Prosperity,” the plan “necessarily entails the limitations of certain sovereign powers in the Palestinian areas” such as self-defense and control of airspace. While touted as a “Two-state Solution,” the plan reads more like a blueprint for a final solution to exterminate Palestinian hopes for self-determination.

Standing in the historic White House East Room, the two morally impoverished leaders, one facing an impeachment trial in the US Senate and the other formally indicted on bribery charges, beamed gushingly at one another, while the TV cameras rolled. In a sycophantic rant, Netanyahu called Trump “the greatest friend that Israel has ever had in the White House,” to whom he owed “an eternal debt of gratitude.” While three Arab leaders, namely the ambassadors from Bahrain, Oman and the United Arab Emirates, were present, notably absent were ambassadors from Jordan, Egypt and Saudi Arabia.

Of course, there were no representatives of the Palestinian People present for this bilateral publicity stunt mainly organized by Trump son-in-law, Jared Kushner. Viewed as more of an ultimatum from Trump than a peace proposal, the plan effectively scuttles any hope of a real Palestinian state, although it refers to one, after having qualified that the Zionist regime would have full control of borders and airspace.  Furthermore, no illegal Israeli settlements would be disturbed under the plan, while Tel Aviv’s security control would be expanded to encompass the entire Jordan valley.

Palestinian President Mahmoud Abbas, reacting negatively to the plan, remarked, “After the nonsense that we heard today we say a thousand no’s to the Deal of the Century,” vowing resistance through “peaceful, popular means.” Needless to say, the Islamic resistance movement, Hamas, totally rejected the peace plan, calling it an attempt “to liquidate the Palestinian national project.” Hamas leader Ismail Haniyeh, warning of a “new phase in their struggle,” stated, “We firmly declare that the ‘deal of the century’ will not pass.” As if to emphasize the point, an unknown resistance fighter fired a rocket towards Zionist-held Palestinian territory shortly after the Hamas leader’s statement had been issued.

Philip Luther, Amnesty International's Middle East and North Africa Research and Advocacy Director, noted that the deal was “proposing further annexation of Palestinian territory, which would flagrantly violate international humanitarian law.” The Zionist regime’s outright denial of basic human rights for Palestinians and dehumanizing discrimination has been well documented, and Trump’s deal, according to Luther, would be an “endorsement of these brutal, unlawful policies.”

For his part, Trump emphasized, “Under this vision, Jerusalem will remain Israel's undivided - very important - undivided capital.” Netanyahu praised the impeached US president for having been able to “recognize that Israel must have sovereignty in places that enable Israel to defend itself by itself.” Hamas spokesman Sami Abu Zuhri, responding to the giveaway of Jerusalem by Trump, wrote, “His deal isn't worth the paper it's written on and Jerusalem will remain for Palestinians.”

Al-Quds, or Jerusalem as it is referred to in the west, is the location of the third most sacred site in Islam, Al-Aqsa Mosque. Before being instructed to change the qibla, or direction of prayer, the Prophet Mohammad (S) faced Jerusalem while in prayer as did his followers.  For a period of over 400 years up until the First World War, Al-Quds was a province under the Ottoman Empire, after whose defeat the ancient city, along with the rest of Palestine, was placed under mandate to Great Britain. Following the Second World War, Britain relinquished its mandate, and the nascent United Nations proposed a partition plan in an effort to resolve the violent conflict that had developed between indigenous Palestinians and Zionist immigrants.

Al-Quds itself was to be an international zone under control of “a permanent international regime for the supervision and protection of the Holy Places.” The proposal was codified in a U.N. General Assembly resolution No. 181 (II) of November 29, 1947, and further strengthened by U.N. General Assembly resolution No. 194 (III) of December 11, 1948.  The commission formed under resolution 194 concluded that “the Jerusalem area, including the present municipality of Jerusalem plus the surrounding villages and towns ... should be accorded special and separate treatment from the rest of Palestine and should be placed under effective United Nations control.” A draft text for establishing a permanent international regime for Al-Quds was prepared, but it was never implemented, despite the fact that the Palestinian and Arab delegates had indicated a willingness to accept the internationalization of the city.

Under Islamic jurisprudence, or Sharia, Al-Quds cannot simply be given away, sold, or otherwise disposed of, by Trump or anyone else.  The sole ownership and proprietary right to the area in Al-Quds known as Haram al-Sharif, referred to as the Temple Mount in the west, which includes Al-Aqsa Mosque and the Western (or Wailing) Wall, along with the pavement in front of the Wall and the adjacent so-called Moroccan Quarter, belongs to the Muslims. These properties for the benefit of all Muslims are held in a type of Islamic charitable trust known as waqf.  Under Sharia, property declared waqf ceases to be owned and can neither be gifted nor sold to any other party.

By 1949 as a result of a peace treaty between the Zionist regime and Jordan, Al-Quds became a divided city, with the influx of Jewish settlers concentrated in the west and Palestinians in the Jordanian portion in the east. However, this de facto split was abolished by the Israeli invasion of 1967, at which time Zionist forces seized control of the entire city. For its part, the Zionist regime, flouting international law under political cover from the US, annexed East Jerusalem in 1980. At the time of the signing of the Oslo Accords in 1993, the signatories had agreed to settle the status of Al-Quds within three years, but primarily due to Israeli intransigence and US complicity, have failed to resolve the issue.

Now comes Trump with his 181-page “Peace to Prosperity” ramrodded by son-in-law Jared Kushner, a document which alleges to be “a vision to improve the lives of the Palestinian and Israeli people.” This vision proceeds to justify the Zionist land grab of 1967 by claiming, “Withdrawing from territory captured in a defensive war is a historical rarity.” And how grateful the Palestinians should be that the Zionist regime “has already withdrawn from at least 88% of the territory it captured in 1967.” To use the analogy of El Hajj Malik El-Shabazz, this is similar to demanding that a victim who was stabbed with an 8-inch knife be grateful that the assaulter has withdrawn the blade 7 inches.  In short, there is no progress in “Peace to Prosperity,” only an attempt to kill whatever remains of hopes for a Palestinian state.

If there is any “vision” here, it is the work of the terminally myopic, demonstrating not only the Washington regime’s inordinate insensitivity towards Palestinian aspirations, but also its chronic incapacity to address Palestinian grievances or recognize Palestinian rights. No, rather than a realistic solution, Trump’s plan is a Zionist equivalent to a “final solution” for Palestinians.
Source : Iranian Agencies
Share It :
Related Stories 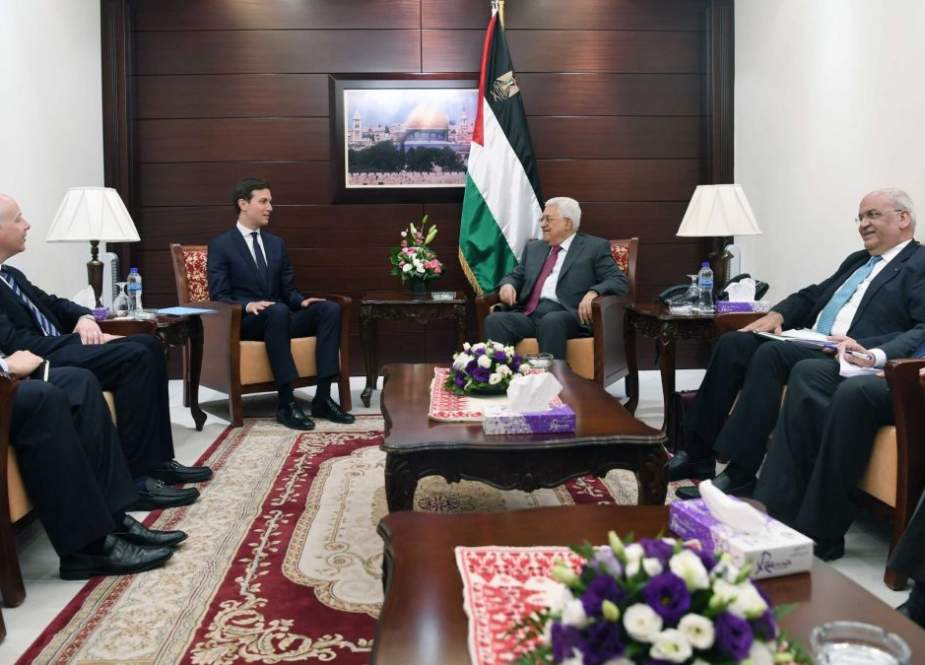