Why Bernie Is Democrats’ Best Hope to Beat Trump

By Finian Cunningham
Story Code : 844894
Islam Times - Maybe the Democratic Party should sometimes listen to President Trump for a change instead of reflexively deriding him at every turn. The party is desperate to beat the Republican incumbent whom it hates with a vengeance.
So as the Democrats prepare to nominate their presidential candidate from a crowded field, who gives them the best chance at winning the election in November?

According to the president himself, it is Bernie Sanders, whom he fears most.

Asked whether Trump would prefer to run against Sanders or billionaire tycoon Michael Bloomberg, the president said this week: “Frankly, I’d rather run against Bloomberg than Bernie Sanders,” speaking to reporters at the White House. “Because Sanders has real followers, whether you like him or not, whether you agree with him or not. I happen to think it’s terrible what he says. But he has followers. Bloomberg’s just buying his way in.”

Bloomberg, a former mayor of New York City and media mogul, is spending tens of millions of dollars to promote himself as the Democratic presidential candidate. The party will nominate its candidate at a convention in Milwaukee in July.

But as the Democrat primaries get underway across the US, it is Bernie Sanders, the 78-year-old senator from Vermont, who has shown the early lead. The self-declared socialist won the popular vote in Iowa last week despite a debacle over delegate counts. This week, Sanders topped the ballot in the state of New Hampshire.

Later this month, the Democrat campaign moves on to Nevada and South Carolina before the Super Tuesday races take place in heavyweight states like California and Texas.

Sanders’ confidence about doing battle against Trump for the White House is due to the same reason that Trump fears him: Sanders has got a formidable grassroots movement of supporters and campaign organizers. No-one among the other Democrat candidates has inspired the same verve among supporters. Sanders has tapped into crucial demographic groups of youth, students, workers and ethnic minorities. He seems to have galvanized that enviable vital power – popular momentum.

Another key political weapon is policy relevance. As Sanders said: “Our agenda speaks to the pain of the working families of this country.”

After Iowa and New Hampshire, the electoral stars of Senator Elizabeth Warren and Joe Biden, the former vice president under Obama, have faded.

However, Pete Buttigieg and Senator Amy Klobuchar have emerged as two candidates vying with Sanders for the Democratic ticket. They came in second and third, respectively, in the New Hampshire primary.

Both of these candidates have been relatively unknown until recently. Klobuchar even jokes that voters don’t know how to spell her name most of the time. While Buttigieg, a former mayor of South Bend, Indiana, has a boyish image and an opaque military career as a soldier in Afghanistan with alleged links to CIA covert ops.

There is more than a suspicion that the Democratic Party hierarchy is grooming Buttigieg and Klobuchar to stand as the “centrist” candidates in a bid to maximize appeal for mainstream voters.

As the New York Times put it this week: “The Democratic contest seems to be coming down to the question of whether the party will move to the left with Mr Sanders, a democratic socialist, or to the center with Mr Buttigieg or even Senator Amy Klobuchar, who was in a strong third.

The newspaper let slip the possibility of a party stitch-up against Sanders when it admitted, “the traditional structures of the Democratic Party are set to mobilize against Mr Sanders out of fear of his revolutionary brand of democratic socialism.”

This is where the tactical and anti-democratic machinations of 2016 are in danger of repeating with disastrous consequences. Back then, Bernie Sanders had energized youth and workers for radical change in Washington, similar to the way he is doing again in this electoral cycle. But the Democratic grandees thought they knew better four years ago by backing Hillary Clinton as the presidential candidate. The fetid cronyism of the Democratic Party hierarchy could not see that Clinton was despised by many ordinary Americans for her bland centrism and connections to big business.

By denying Bernie Sanders the chance to run for the presidency in 2016, the Democratic Party machinery not only snubbed the democratic wishes of ordinary party members and wider voters, they inevitably let maverick Donald Trump scoop up the massive voter-discontent among American citizens who are sick of the warmongering duopoly in Washington, also known as “the swamp”.

This time around, incredibly, there is no sign that the corrupt Democratic hierarchy has learnt anything about their flawed concept of centrism.

To win an election, what is needed is a politician who speaks to people’s grievances and passions. Trump managed to do that in 2016, albeit under false pretenses as a demagogue.

Given the appalling economic inequality and social collapse in the US, what is needed is a candidate who can fire up popular anger at the crumby predatory capitalist state of the US oligarchy. That’s not possible by being a safe, mediocre “centrist”. A full-on political assault against the rotten system is required.

In an interview with Britain’s Independent, Bernie Sanders’ older brother Larry gave the following insight for why he is the man to take on Trump.

Larry (84), a retired academic and political activist who lives in Britain, said: “The election will be fought on those great issues: the issues of who gets what, of whether your wealth and income is geared towards billionaires, or whether everybody gets the chance of a decent life. Within that, the Democrats – if they’re led by Bernard – will win. If they are led by some soft middle-of-the-roader, they’ll have a much harder time. Because we got Trump because we had decades of middle of the road. Middle of the road doesn’t mean the middle, it means the people with power are not challenged.”

Bernie Sanders, it seems, has captured the winning zeitgeist. And Trump knows it – unlike the Democratic Party bureaucrats.
Source : Strategic-culture
Share It :
Related Stories 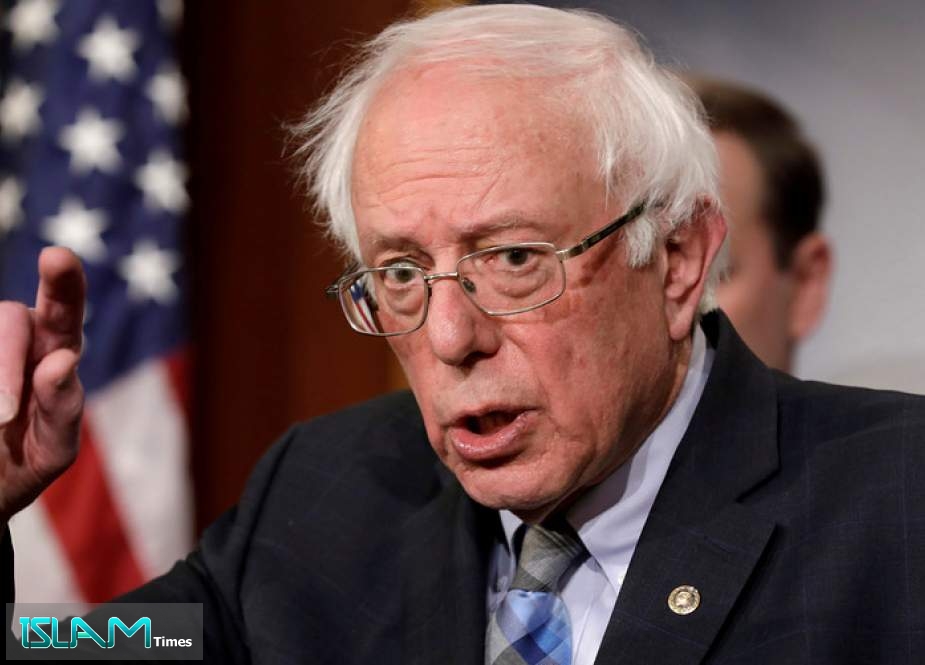 Why Bernie Is Democrats’ Best Hope to Beat Trump
Islam Times - Maybe the Democratic Party should sometimes listen to President Trump for a change instead of reflexively deriding him at every turn. The party is desperate to beat the Republican ...
Comment
Post-Coronavirus World, Transition From Unipolar Order
India Bans All Exports of Trump’s ‘Game Changer’ Virus Drug
Three New Coronavirus Infections in Syria
UN Official Warns of "Dire" Financial Crisis Due to Coronavirus
Hamas Highlights Solidarity with Iranians in Fight against Coronavirus
Rouhani: High Risk Jobs to Remain Shut Down until April 19
Hashd al-Sha'abi Vowed to End US Occupation of Iraq
Libyan Forces Shoot down 3 Fighter Jets Operated by Rebels
Coronavirus Cases Pass 1,2 Million and Over 65,000 Killed
Erdogan’s Idlib Misadventure: Reality Checks and Hard Lessons for Turkey
New York City Offering Prisoners at Rikers Island $6 an Hour to Dig Mass Graves
The US was Named The Best Equipped Country to Deal with a Pandemic Not a Year Ago — What Happened There?
The U.S. Needs to Know What Went Wrong: Washington Post
Sick and Sadistic: World Fights COVID-19 Amid U.S. Sanctions
Syria's Air Defenses Confront Israeli Missile Aggression East of Homs