Story Code : 851808
Israeli leaders have found finding themselves in an uncomfortable quandary: work with Arab lawmakers or let the year-long political chaos continue.
The third Israeli elections to be held within a twelve-month period once again failed to bring about the desired outcome. If anyone was hoping to see an end to the political deadlock that exists within Israeli politics, they must be very disappointed. In fact, prospects for a stable government that is supported by a majority in Israel’s main legislative body, the Knesset, seem as unlikely as ever.

At the time these words were written, Benny Gantz, leader of the Blue and White party, was asked by the president of Israel to try to form a government. So far, based on the recommendations of the other parties, he does have the ability to secure a majority of 61 in the 120 seat Knesset, however, 15 of those 61 votes would be from outside of the coalition. Why? Because those fifteen votes come from the Joint List, or as it is officially called, the Joint Arab List. In Israeli politics racism and prejudice against Palestinians is so prevalent that no government could be formed through a partnership with Palestinian, or “Arab,” parties.

While this may change at any moment, it is important to note that Gantz was tasked by Israel’s President Reuven  Rivlin to do this only because the Joint List, which is made up of four predominantly Palestinian parties, made it possible. The coalition is currently the third-largest bloc in the Knesset and has decided to recommend Gantz to the president. That decision was based largely on a desire to bring an end to the reign of Benjamin Netanyahu. If things do not change and Gantz does become Prime Minister one would hope he will remember to pay back the people who got him there.

Campaign Promise
Gantz is feeling uneasy about being recommended by the Joint List. During the election campaign, Gantz, serving as leader of the Blue and White party, vowed several times not to head a government that includes the Joint List or that even relies on their support. In fact, in a video posted recently by his opponents, he is shown making this pledge twenty-five times. Yet, since the Joint List increased its presence in the parliament with an unprecedented fifteen seats and Blue and White lost a couple of seats, Gantz had little choice. 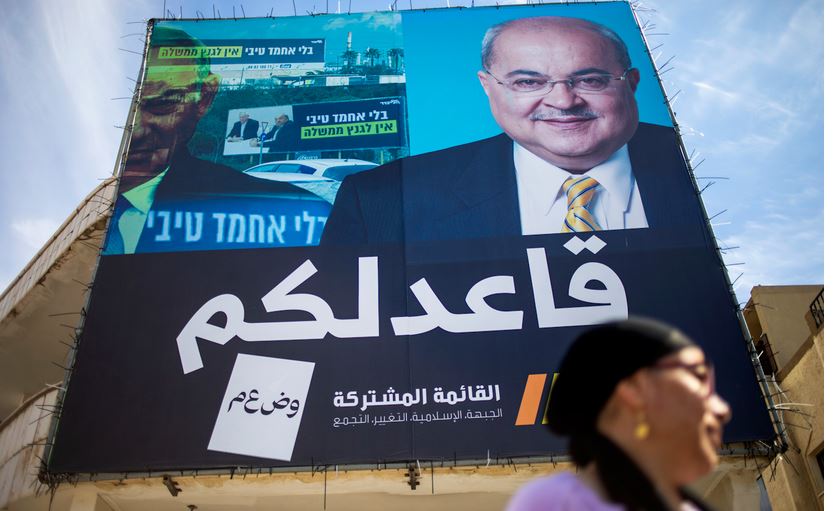 A Joint List campaign poster featuring Ahmad Tibi. The Arabic reads “I sit with you.” Ariel Schalit | AP
The reality that was subsequently forced onto him and all the other Zionist parties is an impossible one. Half of them want Netanyahu to remain as Prime Minister and the other half despise him and want him out. They all want a seat at the table but none of them have enough seats to get what they want. Gantz said several times that if Netanyahu steps down he will agree to form a national unity government with Netanyahu’s Likud party, but that doesn’t seem likely. So far the “Right Block,” which includes the Likud party and its fringe right-wing allies, remains loyal to the “boss” and that means that for the time being, Netanyahu is not going anywhere.

An Uneasy Choice
It cannot be easy for Arab citizens of Israel to support any of the current Israeli political party leaders. Since the establishment of the state of Israel, not a day, or even a moment, has gone by in which Palestinian Arabs were not forcibly dispossessed, detained, faced discrimination, violence, and even outright killing, all carried out by state institutions. Most, if not all of Israel’s political leaders, were involved in one way or another in crimes against the Palestinian people and they all support the current system of apartheid.

All of the Israeli political leaders and their constituents believe in the legitimacy of Israel as a so-called Jewish State, where Israeli Jewish citizens have privileges that are denied to Arabs. The mantra that is repeated ad nauseam by leaders of the Zionist parties is that Israel must be “Jewish and democratic.” While it is a good sound bite, there is no way to have a state that is Jewish and democratic in an overwhelmingly Arab country.

There is not a Palestinian alive that has not suffered from Israeli brutality in one way or another and so Gantz should be immensely grateful that Joint List members recommended him at all. Gantz is known to be the general that prides himself on killing countless Palestinians and on the destruction he left behind in Gaza.

A Way Out
The Jerusalem Post reported that another military figure in the Blue and White party, General Gaby Ashkenazi, is now negotiating with Netanyahu’s Likud Party regarding a possible unity government. If the Post’s reporting is accurate, it would mean that Ashkenazi would have to break a campaign promise not to sit with Netanyahu but it would clearly be easier and more beneficial for Gantz in the long run, allowing him to avoid what he fears most, the prospect of being remembered as the prime minister that had to rely on the “Arabs.”

The disdain with which Blue and White’s leaders talk about the Joint List was described by Israeli journalist Orly Noy as “the tone of an IDF officer to a Palestinian at a checkpoint.” One wonders if people who were not raised in a racist society, or were victims of one, can possibly understand just how deep the racism runs and how normalized it is in Israeli discourse. The only Israeli political campaign that did not include hate and incitement was that of the Joint Arab List. They held on to the principles of tolerance and inclusion, and the results speak for themselves – an unprecedented fifteen seats.

The only way out of this political impasse is to undo the system that created it. Five million Palestinians denied a voice must be allowed to participate in the process. Once the two million Palestinians locked up in the Gaza Strip and three million in the West Bank participate in the elections, the Zionist regime will fall and a new democratic system will take its place.

The emergence of a strong Palestinian-led Joint List is an important lesson. The members of the list set aside their differences and opted for unity and that brought them the strength they needed in order to be heard. This may well be the first step toward a truly democratic system.

Miko Peled is an author and human rights activist born in Jerusalem. He is the author of “The General’s Son. Journey of an Israeli in Palestine,” and “Injustice, the Story of the Holy Land Foundation Five.”

Iraq’s Nujaba Warns of ‘Decisive’ Response to Any US Attack
US Will Not Drop Hostile its Policy: N Korea
The US was Named The Best Equipped Country to Deal with a Pandemic Not a Year Ago — What Happened There?
Future Of Bin Salman, His Plans Amid Coronavirus Crisis
Featured Stories