Story Code : 852540
Islam Times - Indian Prime Minister Narendra Modi's handling of the coronavirus crisis has been criticised by activists and rights groups after it emerged his government decided to go ahead with an arms deal with Israel worth hundreds of millions of dollars.
According to a statement released by the Indian government, Israel will supply the Indian military with 16,479 Negev light machine guns, despite growing concerns over the health emergency facing the country of 1.3 billion people.

The deal, worth $116 million, came as doctors on the frontline in India continue to complain of a shortage of masks and protective equipment, highlighting concerns that India is ill-prepared to deal with a crisis of this magnitude.

According to authorities, there have been around 469 known cases of Covid-19 in India with 10 fatalities.

But India, like several other countries, has conducted few tests and is experiencing a spike in infections.

On Monday, an Indian epidemiologist said that up to 55% of the country or some 715 million people could have the virus, while a conservative estimate suggests India could see around 30,000 deaths by May.

With concerns rising over the rapid acceleration of the pandemic and the impact it has already had on economies around the world, the thought that the struggling Indian economy could afford to absorb military spending at this juncture has left some reeling.

Achin Vanaik, a retired professor of International Relations and Global Politics at the University of Delhi, described the decision as "extraordinary and highly condemnable, especially as it becomes clear that authorities are well aware that official stats are a gross underestimation at this point."

He told Middle East Eye that, "India needs every rupee to deal with the very real danger of the coronavirus pandemic spreading in a country of 1.3 billion people - living in densely populated cities and towns. As it is, compared to Europe, North America or even China and other countries in Asia, the medical system here is woefully under equipped to deal with this emergency. This diversion of funds is deeply distressing."

'On the course of demagoguery'

The weapons contract signed on Thursday was originally authorised by the Defence Acquisition Council (DAC) in February 2018, and is part of a series of weapon agreements between the two countries under prime ministers Benjamin Netanyahu and Narendra Modi.

According to India's defence ministry, "the provisioning of this operationally urgent and very critically needed weapon will boost the confidence of the frontline troops and provide much needed combat power to the Armed Forces."

But Apoorvanand, a professor at the University of Delhi, the move to prioritise arms at a time of a crisis was only part of a larger attempt by the BJP-led government to turn India into a security state, like Israel.

"The so-called security of the state is all that matters. So it keeps on invoking enemies, either outside or within. And it has turned people, especially Hindus into paranoid masses," Apoorvanand told MEE.

"It is clear that the PM had nothing to offer as a government in tackling this crisis. Our doctors don't have protective equipment in sufficient quantity; we don't have capacity to do testing as advised by the experts.

"Instead, Modi is taking India on the course of demagoguery, and this is all it has to offer the people."

Similarly, Kavita Krishnan, leader of the Communist Party of India, told MEE that given the government had yet to announce any relief package for those losing their livelihood as a result of the pandemic, choosing to spend massive amounts on military purchases was unconscionable.

"People rendered suddenly jobless are forced to rush back to villages to survive, risking the spread of the virus as they go.

"Why is the government of India choosing to spend massive amounts on military purchases instead of prioritising a corona relief package, medical infrastructure, free healthcare and testing for all right now?” Krishnan asked.

India's Ministry of Defence did not respond to MEE's request for comment.

The Indian government's efforts so far have been largely ridiculed as being all spectacle and no substance. On Sunday, millions emerged on their balconies and many others came out onto the streets to clap and bang pots and pans in a show of solidarity with doctors, nurses and paramedic staff, in what was seen by some as a grotesque PR exercise for the Modi government.

But the government has also moved to shut down some 80 districts across the country and suspend interstate train and bus networks. Meanwhile, Delhi has said it would be increasing rations for the poor.

The Indian administration has also come under fire for the partial communication blockade in Kashmir, which academics and activists argue will have dire consequences for eight million people already living under a military occupation.

Not only are hospitals understaffed and poorly-equipped but the restrictions on the internet have left doctors reeling over their inability to download the latest guidelines or resources needed for treatment.

In an open letter to the World Health Organisation (WHO), more than 170 South Asian academics and activists called on the body to apply pressure on India to reinstate the internet at full speeds and to release political prisoners.

“As we are already seeing in countries across Europe and America, reliable internet also allows day-to-day economic and educational functions to operate substantially during any social-distancing measures, which are central to preventing community spread of this highly contagious disease,” the letter read.

“It is also urgent to bring to your attention the plight of hundreds of Kashmiri political prisoners, who remain detained in unhygienic conditions in various jails in Kashmir and across India, and are therefore at a grave and increased risk of infection".

Responding to the restrictions in the disputed territory of Jammu and Kashmir, Amnesty International India said in a statement that failing to allow people access to information might amount to human rights violations.

India and Israel's ties have strengthened significantly in recent years, especially under Modi and Netanyahu. Though trade in arms forms the bedrock of the relationship, both countries are increasingly relying on each other or find ways to allude to their alliance.

In attempting to echo calls for social distancing, the Israeli prime minister also suggested that Israelis stop shaking hands and greet each other with "Namaste" instead.

Last week, Netanyahu reportedly asked Modi to approve the export of masks and pharmaceutical raw materials to Israel, after India had banned the export of these items to meet its own domestic requirements.

India is the largest buyer of Israeli military equipment and now accounts for 46 percent of Israel's arms exports.

"Our national resources should be used to tackle the Covid-19 threat; to testing and equipment and for the development of a vaccine, if possible," Apoorvanand says.

"But India is not even thinking about that. India is not ambitious at all. It has a false sense of superiority, which it is trying to show through a stockpiling of armaments."
Source : Middle East Eye
Share It :
Related Stories 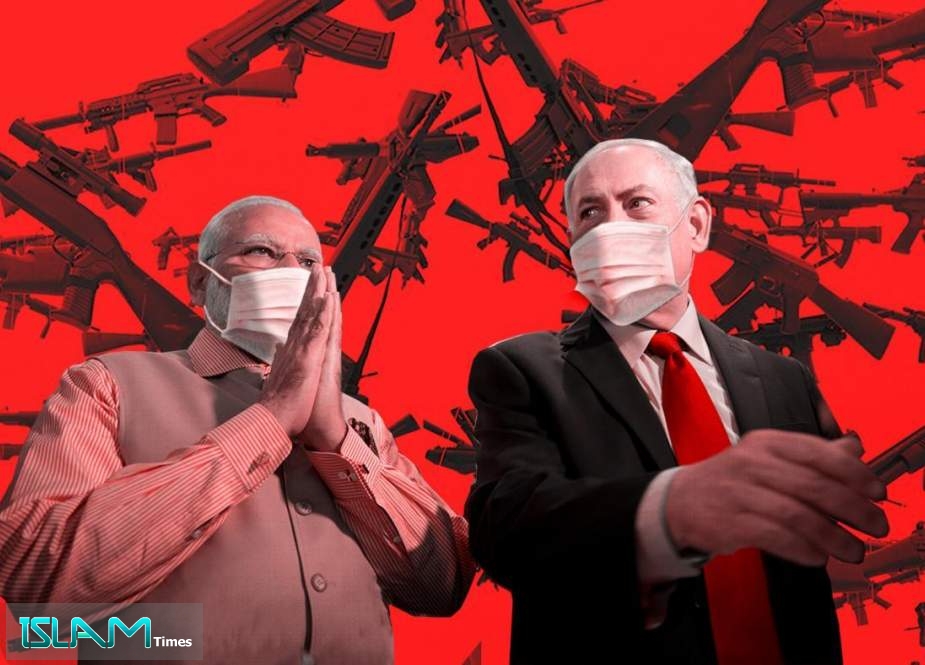