9/11: War on Terrorism or War via Terrorism

Story Code : 885947
Islam Times - 9/11 and the attacks on the World Trade Center's Twin Towers in New York could be seen as a turning point in the US foreign policy. In general, the US foreign policy's identity is defined in terms of the Other. In this sense, during the Cold War, the Soviet Union and the Eastern Bloc and the communist countries in general were the United States' Other; Thus, all the US policies, both domestic and international, were based on this Other. Programs such as the Marshall Plan, the strengthening of NATO, the domineering presence in the East and Southeast Asia, were all based on the idea of ​​fighting the Eastern Bloc.
After the collapse of the Eastern Bloc and fading of the threat of international communism, a kind of confusion in the US policymaking became noticeable in the 1990s; an issue that overshadowed almost all of Bill Clinton's presidency. This ambiguous and uncertain status made the United States grope for a solution to rebuild its identity both at home and abroad (Jafari, 2013). The 9/11 attacks took place in such atmosphere and provided the best excuse for the central government to align various currents through creating enemies and phobias of them. The same government that had come to power without full public support and fewer popular votes than its rival, and was actually seeing its legitimacy under question. This rebuilding of identity took place in two dimensions. One was the public opinion about the United States' status in the world, and the other one was aligning various legal institutions within the country. It should be noted that both of these dimensions dominate the psychological atmosphere rather than the actual one. This means that in terms of the real security and terrorism threats, almost no difference had occurred as to the conditions of the Americans the day before and the day after 9/11; namely, the American people, before and after 9/11 were no more or no less at the risk of terrorism, but psychologically, they felt more insecure after 9/11. This authorized carrying out domestic spying missions within US borders, and also reduced the possibility of effective opposition to whatever military intervention in other parts of the world. At the governmental level, the United States had begun counter-terrorism arrangements since the 1980s and 1990s. Even the CIA report of February 7, 2001, had referred to Bin Laden's international threat, and in fact, security sources and government agencies were aware of it (CIA, 2001). The issue that only became more coherent with the events of 9/11 through the alignment of all governmental institutions, and in practice, increased the cooperation of these institutions due to the psychological atmosphere created.

The war on terrorism seems to have completely filled the gap in the US political atmosphere and macro policymaking (Pillar, 2016). The war on terrorism has allowed the United States to obtain legal authorization from domestic agencies for military interventions and spying on its own citizens. Also, because of the popular feelings emerged under such conditions, almost no serious and effective opposition was aroused from people.

Even if we ignore the opinions of those who question this attack in political, technical and engineering dimensions and deem the collapse of the towers as such practically impossible only due to the collision of the planes and believe that another factor was also involved, but still, examining the role of this event in the US foreign policy in the years following 2001 helps to understand the US international behaviors.

Known as the biggest terrorist attack, 11/9 marked the beginning of an era known as the era of the “war on terrorism.” An era that was characterized by the domination of the neoconservatives over the US policies and established their thoughts as the driving force behind the US policies. Policies that practically legitimized the US military intervention and assaults in other parts of the world. The so-called war on terror, whether in Afghanistan, Iraq, or Pakistan, and later in countries such as Syria, in practice had no connection with the real eradication and fight against terrorism. In an article, Emile Nakhleh enumerates three parameters for the formation of terrorism and believes that any fight against terrorism must actually destroy these three roots, and military action alone cannot practically eliminate terrorism (Nakhleh, 2016). He believes that the formation of anti-American terrorism has three main parameters: 1) Radical Salafism rooted in the Wahhabi ideology of Saudi Arabia 2) Local policies of Muslim countries such as repression, corruption, poverty, unemployment and lack of proper education and despair 3) Anti-Islamic policies of the US government, such as drone bombings, aggression against Muslim countries, especially Iraq, and torturing Muslims, as happened at Guantanamo (Nakhleh, 2016).

Considering these parameters and looking at the policies of the United States in recent years after 9/11, it becomes clear that in the war on terrorism by the United States not only these parameters have been ignored, but also the formation of terrorism has become more widespread. Due to its excessive dependence and thirst for cheap Saudi oil, as well as the need to fight against the spread of Iranian influence in the region, the US has practically turned a blind eye to the development of Salafi and Wahhabi thoughts by Saudis. Thoughts with a specific history which, with the support of oil money, are expanding day by day and are effective in radicalizing various movements in the world. However, as mentioned below, the United States is not only satisfied with the growth of these movements in different parts of West Asia, it can even be said that it has greatly facilitated their growth there. In addition, the United States has deliberately ignored repressive and discriminatory practices in countries such as Saudi Arabia, Bahrain, and Egypt. This is because of the need to penetrate in these countries. Bahrain is the home to the United States Navy base known as Naval Support Activity Bahrain (or NSA Bahrain), and the government of General Abdel Fattah al-Sisi has always been overlooked by the United States because of its close ties to the Zionist regime and keeping the Suez Canal open. These governments, although being practically the cradle of terrorist groups, are politically, economically and diplomatically supported and introduced as friendly and moderate regimes, which in fact makes the real fight against terrorism a bitter irony in the international atmosphere.

In addition, the US policies since 2003, especially in Iraq, should be considered because of the impact they have had on the formation of the ISIS terrorist group. According to experts, this terrorist group was born out of the remains of al-Qaeda in Iraq, a group that the United States has claimed to be fighting. Al-Qaeda in Iraq, led by Zarqawi, was formed in 2004 to fight American forces that first entered Iraq as liberation forces and eventually became occupying forces. In 2003, after the occupation of Iraq, the United States completely disbanded the Iraqi army and dismissed more than half a million trained troops (Thompson, 2015). The forces that, according to the Secretary of State of the Bush administration, Colin Powell (Powel, 2012), formed the main structure of these terrorist groups by entering al-Qaeda in Iraq and then ISIS. The US military's savage behaviors against Iraqi civilians, as well as the establishment of places such as Camp Bucca for detaining people, made it possible for terrorist groups to establish communications and recruit (Hasan, et al., 2018). These actions led to the formation of al-Qaeda in Iraq, which later changed into the ISIS, a group led by Abu Bakr al-Baghdadi, a former resident of Camp Bucca. But just as the United States had supported Salafi groups in Afghanistan to oust Soviet forces and, after succeeding in doing so, abandoned them which resulted in strengthening al-Qaeda in Afghanistan, so in northern Syria, by supporting ISIS and providing all sorts of assistance to it in various forms (Sachs, 2016) it was equipped to fight against Bashar al-Assad's government in Syria in order to overthrow Bashar al-Assad, who has close ties to Russia and Iran. The goal that was not reached in reality, but resulted in strengthening the ISIS and expanding its activities in other parts of the world.

Overall, 9/11 formed a new doctrine in US politics: the war on terrorism doctrine. This doctrine helped the United States to build political cohesion domestically and it became a tool internationally to justify military and non-military intervention and aggression. Given the volume of US financial and military spending and the costs imposed on other countries, the risk of international terrorism in the world is expected to decrease on the 19th anniversary of the attack on the Twin Towers compared to 2001 and before the incident. But what has actually happened is that the way the US has dealt with the phenomenon of terrorism has actually led to the development of it. David Kilcullen, a former adviser to David Petraeus and an adviser to the former Secretary of State Condoleezza Rice, says, "Undoubtedly, if there had been no invasion of Iraq, ISIS would not have existed".
Share It :
Related Stories 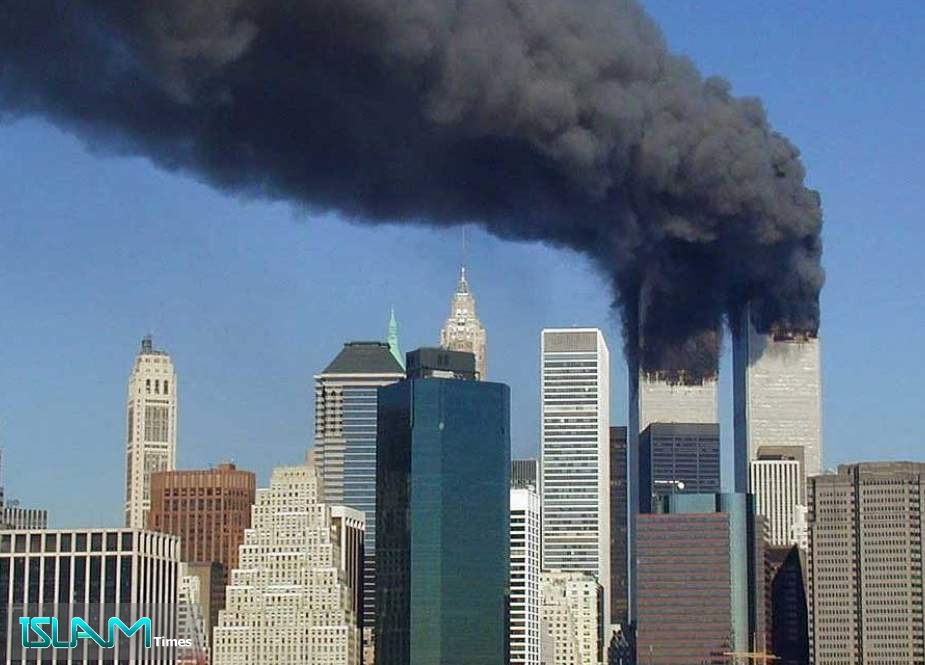 9/11 After 18 Years
Islam Times - I would appreciate hearing from readers whether they have come across a report in the print, TV, or NPR media of the highly professional four-year investigation of WTC Building ...
9/11 was ‘mother of all false flag’ attacks
9/11 was the new Pearl Harbor to instill fear into Americans
9/11 orchestrators pushing Trump to attack Iran
9/11 Victim’s Families Pressure US Govt. to Release Records of Saudi Culpability
9/11 was planned in Tel Aviv and Washington, not in Kabul
9/11 survivors call on May to release Saudi financing extremism report
9/11 Destroyed America
Comment
EU Urges Tougher Anti-virus Measures before 2nd Wave
Saudi Arabia Source of Instability in Region
Wrong Time to Abandon People of Yemen
President Trump’s Son Eric Ordered to Testify in Fraud Probe
Lavrov: Moscow, Tehran Categorically Reject US Attempt to Introduce Permanent Arms Embargo on Iran
Zarif Urges Multilateralism, Inclusive Collaboration to Tackle Global Challenges
Trump Won’t Commit to Peaceful Transfer of Power, Cites Ballots as Issue
France, Spain Deny US Claim That Hezbollah Is Storing Explosives in Europe
Analyst: An Islamic and United Front against Normalization
Embassy Urges Washington to Fight Coronavirus, Not Russian Vaccine
Rights Groups: UAE Hires Thousands of Mercenaries to Carry Out Assassinations in S Yemen
Iraq’s Sadr: Israel Would Mark Own Ending by Opening Embassy in Baghdad
2,000 Days Since It Began, the War in Yemen Is Poised To Turn Even More Deadly
Possible Targets for Taking Revenge for Gen. Soleimani
How US Takes Advantage of Terrorism for Purpose of Its Hegemony!
Martyrs Teaching New Generations to Not be Afraid of Enemy: Ayatollah Khamenei
Ayatollah Khamenei: Sacred Defense Established Security in Iran, Enemies Will Pay Dearly If They Invade Country
PA Quits Arab League Chairmanship: Unhonored to See Arab States Rush to Normalize with the Occupation
Saudi Arabia Receives New Consignments of French Speedboats
Over 30 Taliban Fighters Killed in Afghan Airstrikes: Govt.
Featured Stories