The results are likely to provide more ammunition for Mr. Brown's critics, who are calling for him to step down, arguing that under his leadership the party can't win a general election that must be called within a year. Early election results showed that Mr. Brown's Labour Party could be heading for third place in elections for 72 European Parliament seats.

The biggest beneficiaries were the opposition Conservative Party and the UK Independence Party, which wants to pull Britain back from integration into the European Union. Underscoring the rightward, anti-European drift, the anti-immigration British National Party won two seats -- its first in the European Parliament.

With Scotland and Northern Ireland yet to declare results, the Conservative Party had won 24 seats, the UK Independence Party 13, Labour 11, and the Liberal Democrats 10. Labour's share of the vote was down 7%.

With such losses for Labour, Mr. Brown would face more-difficult prospects for survival in both the near and long term. In the last week, a simmering rebellion within his own party has forced Mr. Brown to scramble to reassert his authority. The mutiny could resurface if the Labour Party decides its showing in the European vote is poor enough.

"Labour's performance means that the drama of Gordon Brown has not run its course, and we will have to see what Labour politicians say" on Monday, said John Curtice, professor of politics at the University of Strathclyde.

Even if he survives, things won't be much easier. The opposition Conservatives and their leader, David Cameron, are widely expected to take control of the government in the next election. Labour is being punished by an electorate sick of the country's deep recession and a scandal over dubious expenses claimed by members of Parliament.

In 1997, Labour supporter Chris Daniels stayed up until early morning to watch the landslide victory that began the party's 12 years of power. This week, Mr. Daniels voted for the UK Independence Party, and on Sunday it was Labour's defeat the 41-year-old was aiming to watch. "I want us out of Europe, which has become a political union. The U.K. is losing its autonomy," he said.

Labour was soundly beaten in England's local elections, held alongside the European vote on Thursday. The Conservatives got a projected 38% of the vote in the local elections, the Liberal Democrats were second, and Labour trailed in third place with just 23%. Labour seemed on course for further defeat as results came in late Sunday.

On Sunday, Charles Falconer, who was lord chancellor, or head of the country's courts, in Tony Blair's Labour government, said that Mr. Brown would have to step down if the party is to win the general election. But Mr. Brown told a meeting of party activists in east London on Sunday that he won't walk away from the country's troubles. On Monday he faces a meeting with Labour members of Parliament, in which rebel politicians have said they will ask for a debate on his future.

The winning of European Parliament seats by the British National Party comes in a country that has always boasted of not voting for parties on the far right or far left. With recession in full swing, the BNP has been able to tap into fears of unemployment and unease about years of large-scale immigration. Earlier this year the U.K., whose mainstream politicians wave the flag for open markets, experienced widespread strikes at oil refineries over the use of foreign labor.

Like other fringe parties, the BNP also benefited from anger over mainstream parties' abuse of parliamentary expenses. And many people expressed their dissatisfaction by not voting at all: U.K. turnout was around 35%, compared with around 43% elsewhere in Europe.

Early estimates were that one in four votes went to non-mainstream parties. This meant that though the Conservative Party thrashed Labour, it didn't win a large increase in its share of the vote from four years ago, though it has gained in national opinion polls since then.

Labour Party ministers sought to blame their defeat on fallout from the expense scandal, in which members of Parliament have abused allowances with extravagant and trivial expense claims. But analysts pointed out that the scandal hit politicians of all stripes.
Source : Wall Street Journal
Share It :
Related Stories 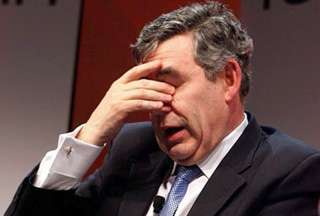