Story Code : 7977
Tens of thousands of Bosnian Muslims prayed for the dead in Srebrnica on Saturday, the 14th anniversary of Europe's worst massacre since World War II, and buried hundreds of victims recently recovered from mass graves.
From early morning, thousands of family members moved among the rows of coffins, looking for those of relatives before the 534 victims are laid to rest next to the existing 3,297 graves at the Srebrenica-Potocari memorial center.

Every few minutes, new buses of survivors and family members arrived to attend the commemoration of 8,100 Muslim men and boys who were killed in Srebrenica over several days in 1995 when Serb forces overran the town.

Every year, more victims' bodies are recovered from mass graves found in the area, identified through DNA analysis and buried. This year among the 534 victims, there are 44 teenagers. Four were 14 when they were killed.

Kadrija Muminagic arrived from Germany to bury his nephew Saidin, who was 14 when he and his father ended up at the execution field somewhere around Srebrenica. Saidin's 16 year-old brother Sulejman was killed by a shell that landed close to their home a week before Srebrenica fell. Only the mother survived the massacre. She died three years later.

"She died of sorrow," said Muminagic, who escaped the killing by hiding in the forest.
ad_icon

During the 1992-95 Bosnian war, the United Nations declared Srebrenica - which had been besieged by Serb forces throughout the war - a U.N.-protected safe area for civilians. A number Bosnians flocked there for protection.

But in July 1995, Serb troops led by Gen. Ratko Mladic overran the enclave. The outnumbered U.N. troops never fired a shot. They watched as Mladic's troops rounded up the population of Srebrenica and took the men away for execution.

The International Court of Justice in The Hague, Netherlands, has ruled that the Srebrenica massacre was genocide. It has been described by former Secretary-General Kofi Annan as the darkest page in U.N. history.

Former Serb political leader Radovan Karadzic, is on trial at the U.N. war crimes tribunal in The Hague. He claims he is not guilty for what happened. Mladic, also indicted for genocide, is still in hiding, apparently in Serbia. Belgrade has faced immense international pressure to arrest him.

Bosnia's international administrator, Austrian diplomat Valentin Incko, said the victims must not be forgotten because "this way we would kill them for a second time."

In 1995, about 15,000 men tried to escape the slaughter by fleeing over the mountains toward the safe town of Tuzla. They were hunted along their 65-mile (100-kilometer) walk; those caught were killed. At the time, Serb TV filmed the hunt and the footage was later used at the court as evidence. Many times it was aired on TV throughout the region. One section shows an elderly man, Ramo Salihovic, caught by Serb soldiers and forced to call his son, Nermin - 16 years old at the time - to come out from the forest and surrender. The boy obeyed.

Both have been found in mass graves and are being buried today.

Saliha Osmanovic, 55, sat next to their coffins. She said she had seen her son Nermin last Friday at prayers in the mosque and that he told her everything will be fine. But her brother Fadil, who was standing behind her, whispered to the reporter later: "She is hallucinating for the last 14 years."

Among the dignitaries attending the ceremony was a U.S. congressional delegation, led by Rep Russ Carnahan, who laid a wreath at the Memorial Stone.
Source : Washington Post
Share It :
Related Stories 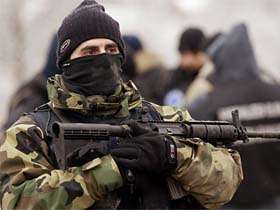