Story Code : 716978
Islam Times - Former US Congressman and political analyst Ron Paul says the claim that Syrian President Bashar al-Assad "is gassing his own people is a total nonsense,” adding that the American neoconservatives, who want a perpetual war in the Middle East, are probably behind the recent chemical weapons attack in Syria.
Dr. Paul, a three-time American presidential candidate and the founder of the Ron Paul Institute for Peace and Prosperity, made the remarks in an interview on Monday while commenting on the alleged attack near the capital Damascus on Saturday.

The attack in the militant-held town of Douma in the Eastern Ghouta region left dozens dead and drew international condemnation from various countries and international bodies. The Assad government strongly rejected the allegation of using chemical munitions.

Asked who is behind the chemical attack, Dr. Paul said, “I don’t know. I think the least likely would be Assad. This whole idea of Assad, they say this over and over again, I probably heard it for ten times today: ‘Assad is gassing his own people.’ And they have said it every time it has happened, and then a month of two later it was proved that they were absolutely wrong. So I cannot see any reason why Assad would do this. There’s no reason that Russians have done this. There’s somebody who wants to stir up the trouble, and the people who want us to stay there.”

“Let’s say there’s a hand. There’s a bone thrown out. We might leave, according to Trump. Well, no we have to have a reason for stay. We are not going to let this happen. That’s the problem. You know McCain’s people say: ‘We left Iraq too soon and that’s what happened. ISIS came in,’” he said, referring to the Daesh terrorist group.

“Of course the evidence is pretty strong that we have been very friendly with ISIS. We used ISIS to try to fight out our battle. So somebody wanted to stay there. I think the policy makers here did not want us to leave, and somebody does it for them. But I just think this whole idea that all of sudden Assad is gassing his own people is a total nonsense,” the analyst noted.

An initial assessment by the United States has not determined whether the chemical attack in Douma was carried out by Syrian government forces, according to Reuters.

The assessment also suggested that a nerve agent was used in the suspected poison attack, but further evidence was needed to determine the type of agent, US government sources told the news agency.

President Donald Trump has threatened to respond "forcefully" to the alleged chemical attack despite strong warnings from Russia.

Meanwhile, US officials and media have accused the Assad government and Moscow for the chemical attack.

Asked why they are vilifying Syria and Russia, Dr. Paul said, “Well, I think they have an ulterior goal. It has been there for a long time, and it has a lot to with Saudi Arabia and Iran. I think that’s number one. I think works into that are the Shias against Sunnis, and that works into it. And then there are neocons in this country who have their agenda, and that’s perpetual war for perpetual profit, the military-industrial complex, then you throw in oil and they all come together.”

“And guess what, this is bipartisan. Everyone complains there is not enough bipartisanship in Washington. You know it we have too much of it, because they all support this foreign policy. I think it’s a disaster,” he stated.
Share It :
Related Stories 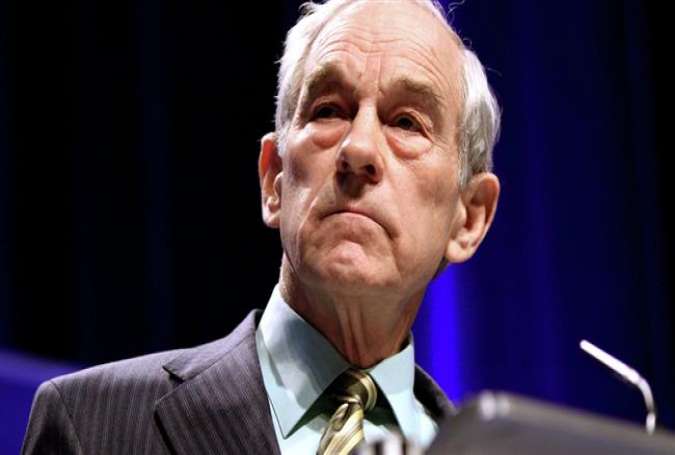