Press TV: Mr. Moussalli, would you agree that the Egyptian people simply have to wait and allow things to move forward?

Moussalli: Well, since the military council is not an elected council, I think the people still do call for the changes. The problem is that the people want a quicker transfer to a more civilian life than the military is ready to do. I think now the main issue, which is raised in a way, is the dates of the elections. A lot of the people are against the dates because they think that the Muslim Brotherhood have a better chance of winning more seats than other party especially those who did not or do not have a structure. I do not think that they all are revolutionaries both the Muslim Brotherhood and the others, but I think the angle they are treating it is very different.

The Brotherhood is more tolerant of the current military. I think that the people are less tolerant of what is happening because they want a quicker change to a civilian life. Do not forget that the trying of the former officials is procrastinating in a way; I mean just being delayed and pushed. Sometimes the former president was sick but [this time] there were so many people involved and it was not only 15 or 20 people. I mean, there were ministers, there were members of the Parliament and there were other officials. So what the military is doing is the minimum that the people require.

I think most Egyptians are looking for a more real government. The problem is that the army does not know how to rule. I mean the army is not set up to rule. They have their own institutions and so on. So the people want to see a more empowered government that is able to act on their behalf whether it is in terms of the judiciary or in terms of the policing and other things. If you have noticed, today the army did not even send any protection or policing to the demonstration because the people's main demand is against the military council. I think the people are afraid of a counter revolution. It is not the military that is afraid of a counter revolution.

Press TV: I would like to ask about what happened recently that the G8 countries just agreed to provide about 20 billion dollars in aid to Egypt and Tunisia and already we are getting negative responses like "the promises of aid are an effort to ensure that these governments remain under the wing of Washington and implement US programs in economics, politics and democracy." How do you see it? Why do you think that we are seeing these 8 promises being made by these nations to Egypt and Tunisia in this case, the case of the Egypt?


Moussalli: I think it is very important from the Western perspective to maintain the relationship with what the emerging democracy is in the area. Although they have supported the previous authoritarian regimes, now they are trying to show as if they have been involved in the making of democracy which definitely they are not and definitely what they are trying to do is to buy these revolutions and I think this probably is not the right way to doing it. For instance, they talk about Tunisia and Egypt and the possibility of helping emerging democracy but they do not criticize the areas where there are still repressions in the [Persian] Gulf or what is happening in Bahrain or any other places.

In other ways again we are coming to political money used by the G8, the US and so on in order to at least order the foreign policy of Egypt and Tunisia and do not forget that we are talking about the Arab Israeli issue and I think in that way you can link it to the speeches of both Obama and Netanyahu last week about the Jewish state and its maintenance and I think here is what is important and it is what should be of interest to the Egyptian people that all of this aid will ultimately be dependent on the way they are going to deal with Israel.

I think the Egyptian army is going to deal with this dilemma since the Egyptian army, as you know, have been trained by the US and others for a long time and they are the beneficiaries of the US aid to Egypt. So now I think they have to rethink their position and I think this is why the Egyptian people should always maintain and sustain the revolutionary momentum. I think things do not happen easily and I believe the possibility of a counter revolution is there and this is why it is very important for all the Egyptians whether they are the Muslim Brotherhood who suffered historically from the regimes or the young revolutionaries to put hand in hand and to maintain the revolutionary momentum.
Source : Press TV
Share It :
Related Stories 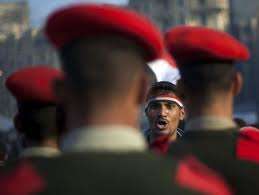 Egyptians fear junta role after elections
Islam Times - Egypt is embarking on a new passageway into democracy with the first ever presidential debate screened live to the masses ahead of the presidential elections slated for 23 ...
Egyptians voice fears over possible voting irregularities
Egypt MPs stand in fear of the military junta
Egypt, a republic of fear: Ex-pres. candidate
Egypt anniversary, hopes and fears
'Arab dictators fear Egypt democracy'
Hamas 'does not fear' fall of Egypt leader
US officials fear losing an ally in Egyptian army
Comment
Trump’s 2nd Impeachment Trial to Commence Week of February 8
Russia to Respond in Kind to US Embassy’s Attempts to 'Cover' Unsanctioned Rallies
Syria Calls on UN to Condemn Israeli Raids
UN Urged to Take Action to Prevent Imminent Humanitarian Crisis in Yemen
NYT: Trump, DOJ Attorney Had Plan to Replace His Acting AG, Undo Georgia Election Result
Presidency Press Office Denies Any Hezbollah Pressures on President Aoun pertaining Government Formation: Statement
Economic Crisis is Deepening in US: Joe Biden
New UK Coronavirus is More Deadly: British PM
US Ready to Work with EU on China, Iran, Russia
Two Roadside Bomb Attacks Target US Convoys in Southern Iraq
More US Troops on Syria’s Ground?!
Syria Condemns US ‘Systematic Looting’ of Its Resources, Oil in NE, Calls for Immediate Withdrawal of Occupation Forces
Biden Fires Trump’s White House Chief Usher
US and Zionist Regime are Behind the Denial of Justice that is Being Done to Sheikh Zakzaki and the Islamic Movement
US Military Apache Crashes in Syria’s Hasakah - Report
US Return to JCPOA Should Not Couple with Preconditions for Iran: Russia
Qatar Calls on Persian Gulf states to Engage in Talks with Iran
Maduro Hails Trump’s Departure: He Left Alone, This Is Our Triumph!
“Israeli” Navy Prepares for Confrontation against Hezbollah, Hamas
Iran Blocks Saudi, UAE From Joining UN Disarmament Talks
Featured Stories