500,000 Yemeni Children are in Critical Condition due to Malnutrition, UN Opposes any Action to Alleviate the Deplorable Situation in Yemen!

Interviewed By Masoumeh Forouzan
Story Code : 894728
Islam Times - A spokesman for the Yemeni Ministry of Health noted that 2.5 million Yemeni children are currently malnourished and that 500,000 children are in critical condition, "The United Nations itself is a major factor in cutting off oil production in Yemen, as it opposes any action taken to alleviate the plight of Yemenis." He stated.
According to the Islam Times, the Yemeni people are living in the worst conditions these days due to the fuel crisis caused by the Western-Arab conspiracy, in which international institutions are almost completely silent, and the Western and Arab media, most of which are the rations of their heads of state, have boycotted the news about the innocent people and the children of Yemen that are oppressed.

The aggressor coalition led by Saudi Arabia, with its daily bombings in various parts of Yemen, killed more than 100,000 people directly and indirectly, injuring tens of thousands and displacing more than three million, as well as the destruction of more than 80% of the Yemeni infrastructure, especially in the field of health.

Currently, more than 4,000 patients with kidney failure are affected by these problems due to lack of access to dialysis centers or closure of these centers; The problems caused by the fuel crisis, which are due to the refusal of the fuel ships to enter Yemen.

In the nearly six months since the tankers were seized, only five tankers have been allowed to enter and unload in the port of Al-Hudaidah, while the reserves of the Yemeni Oil Company have been depleted for about 45 days, and in recent weeks, less than 10 percent of the needs of the most important sectors have been met through overpasses such as Aden and Al-Mukalla, and the transfer of fuel to independent provinces has recently stopped.

The United Nations plays a key role in creating a humanitarian crisis in Yemen.

In this regard, the "Islam Times" reporter spoke with Dr. "Yusuf Al-Hazeri", the spokesman of the Yemeni Ministry of Health, and asked him about the impact of this crisis on the situation and the health system of this country, the spokesman in response to this question answered: "Naturally, fuel is the artery of work and movement in the health sector, because it is the source of electricity, the source of enegy and cooling, and the source of emergency assistance. As a result, its absence means almost paralysis of health services, and hospitals will become only health centers that provide first aid, and in the first hours of power outages, one thousand people will die, for example, those who are undergoing surgery or have diabetes, or women who are having a cesarean section. Undoubtedly, over time and hours, the number of unexplained deaths due to the power outage will only increase."

Dr. Youssef al-Hadiri, a former member of the National Committee for Documenting the Crimes of the Occupiers and Coordinating Relief Measures, in response to the question of whether the United Nations can provide humanitarian assistance to resolve the Darman fuel crisis so that health centers and hospitals are not harmed, has stated that: "The United Nations is playing a key role in this humanitarian crisis and in cutting off oil derivatives, which is the party that, after the Supreme Political Council in Yemen spent half of its staff salaries, this is because it annoys the United Nations, which this international organization aims to oppose any move that reduces the unfortunate situation of the Yemenis."

Due to the chemical attacks of Al-Saud in Yemen, the number of miscarriage has increased and the number of births of children with birth defects has also increased.

He also noted: The United Nations has abandoned all its written principles, which are only written on paper, and has caused a great deal of scandal in the Yemeni tragedy, and its real role was revealed, which is to lay the groundwork for the world's arrogant nations to occupy and steal the world's wealth.

"Islam Times" reporter continued the interview by referring to the use of chemical weapons by the aggressors and the prohibited effects of these unconventional weapons that have been used against the oppressed and innocent people of Yemen and how many Yemenis have been victims of these weapons. Dr. "Yousef Al-Hazeri" also clarified in response: "For the effects of chemical weapons, two levels can be considered near and far, at the near level the number of miscarriage has increased and the number of births of children with birth defects is high. Many cases of abortion, which eventually lead to death, occur in complete silence at home, and for this reason there is no evidence in this regard, but in a nutshell, miscarriage have risen by 15 percent and birth defects by 2 percent."

More than 80,000 Yemeni children are suffering from various mental illnesses due to the explosions caused by the missiles of the invading coalition.

He added: "Because the aggressor coalition is firing too much into the Yemeni mountains, these mountains are full of inactive weapons, and as soon as it collided, these weapons explode, resulting in many cases of such injuries, most of them are amputations."

A spokesman for the Yemeni Ministry of Health went on to describe the situation created by the lack of facilities in Yemen for the Yemeni people, especially the Yemeni children who are currently starving, 48 of the children under the age of five, or 2.5 million out of a total of 5.5 million children, are malnourished, and 500,000 of these children are in critical condition.

He also stated: "More than 80,000 Yemeni children are suffering from various mental illnesses due to the explosions caused by the missiles of the aggressor coalition."

Tens of thousands of children are also suffering from other chronic diseases, which have been barred from going abroad for treatment due to the closure of Sanaa Airport since August 2016. In short, the situation of children is not outside the general situation of the Yemenis, but it is more difficult, more cruel and more pervasive.

What can be expected from the Arab and Islamic countries that carry out the mission of the United States and the Zionist regime to help solve the humanitarian crisis in Yemen?

In response to the question, what do you expect from Islamic countries and the free people of the world as a high-ranking official of the Yemeni Ministry of Health? Dr. Youssef Al-Hadiri said: "What did they do after two thousand and 30 days? To expect from them, are there any dynamic and active Islamic organizations, real, strong and with faith at all? To expect anything from them, but excludes Iran and some resistance movements here and there! The Arab and Islamic countries carry out the mission of the United States and the Zionist regime and sacrifice the blood of their children to support the American army and the Zionist regime. We expect nothing from them, except all kinds of evil. And the country that leads them is the same type of the Saudi Evil Regime."

It is worth mentioning that Saudi Arabia, together with the United Arab Emirates, Bahrain, Sudan and the United States, began its aggression against Yemen on April 26, 2015, by forming a so-called Arab-American coalition, but over the past five years, with the exception of the UAE and the United States, other Saudi allies have left the coalition, and Abu Dhabi has now grown from an old ally to a rival to Riyadh in southern Yemen.
Source : Islam Times
Share It :
Related Stories 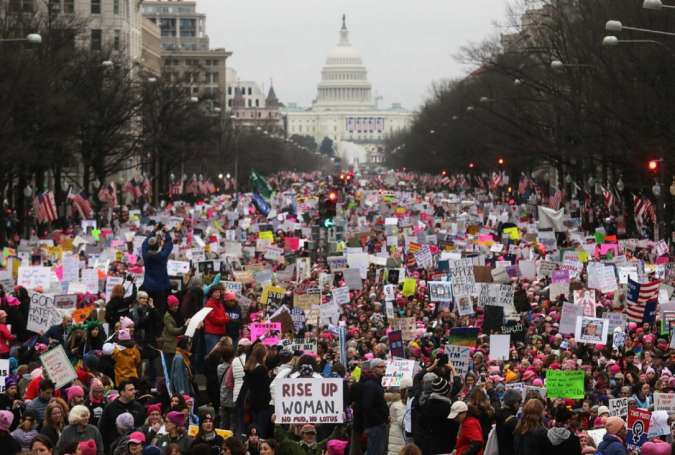 500,000 march on Washington to protest Trump presidency
Islam Times - Hundreds of thousands of people from across the United States descend on Washington to voice their anger and anxiety over Donald Trump’s presidency a day after he took the ...
500 militants enter Syria via Turkey: Observatory
500 Yemen kids killed in 6 months of Saudi war: UN
500% increase in Palestinians detained without trial in 2015
500+ anthropologists join academic boycott of Israel
500 Algerian fighters fight with ISIL
500 Turks fighting with al-Nusra Front in Syria: Turkey
500 Europeans fight along with militants against Syria: EU official
Comment
Netanyahu in 2018: Remember This Name, Fakhrizadeh!