Story Code : 111824
Islam Times - Occupy Melbourne protesters have taken over Melbourne’s Treasury Gardens "indefinitely".
Islam Times: About 60 anti-capitalist demonstrators set up overnight, with the lawn littered with tarps that are being used as makeshift beds.

Protester Nick Carson today said they were not "camping'' but rather "occupying open space to have discussions''.

But he denied the group had lost focus of the original concept of why the protest started - to fight against big companies.

“This movement is the most significant social movement of our generation and it's not going anywhere until fundamental changes are made”' Mr Carson said.

Mr Carson also said the Treasury Gardens would be home to the movement "indefinitely''.

Melbourne police and officers from Melbourne City Council have visited the site.

Protesters said they did not anticipate the violent chaos with police to happen at the location as seen in City Square last month.
Share It :
Related Stories 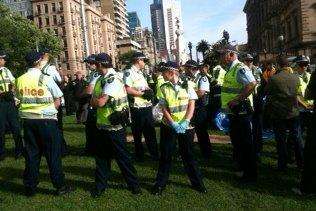