Australian protesters to fight on despite arrests

Story Code : 114628
Islam Times - Occupy Melbourne organisers promised to continue camping in public spaces after launching a court challenge about their right to protest.
The challenge came after police arrested three people in the Treasury Gardens camp yesterday. About 100 police poured in after Melbourne City Council issued an order to remove tents and other items.

The protesters received the notices about 7am, giving them an hour to dismantle the tents. But they said the order impinged on their right to protest peacefully and sought an injunction in the Federal Court, which was later adjourned.

The protesters sought the injunction so they could keep using placards and retain their indigenous protest ''canopy'' tent. It also covered food, cooking utensils, mattresses, sleeping bags, tarpaulins and other personal belongings.

Most of the protesters packed up without incident, leaving one tent near Spring Street. When some protesters resisted, police dragged six people away and made three arrests.
Two are expected to be charged with hindering and obstructing police.

Inspector Bernie Jackson said: “There is no issue with people using the park and standing here. It's just purely the structure issue. If they're taken down then we've got no issue with it at all”.
Share It :
Related Stories 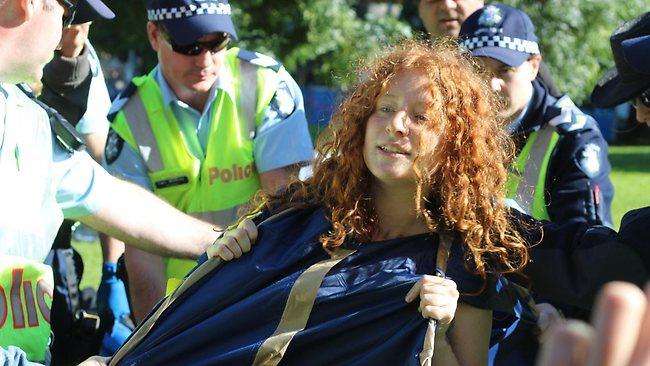