Story Code : 21586
(Islam Times) - A woman in Canada filed a complaint against a French school in Canada; the media circus that followed was Islamophobic.
Islam Times reports from The Globe and Mail: When Naima Ahmed went to college in Egypt to study pharmacy, she took courses alongside men and women. When she dispensed medication, she dealt with men and women.
So it came as a shock to the 29-year-old immigrant to find herself portrayed this week as a hard-line Islamist who forces men to look away when she gives presentations.
"I'm just like any other person," Ms. Ahmed said in an interview with The Globe and Mail yesterday, speaking in her native Arabic tongue. "The only difference is that I wear a veil over my face. It doesn't mean I'm wearing a veil over my mind."
Ms. Ahmed, a mother of three, ignited another round of debate over the controversial issue of accommodation in Quebec after she lodged a human-rights complaint against the province stemming from her experiences at CEGEP de Saint-Laurent, the school where she was learning French.
The incident began when school officials demanded Ms. Ahmed remove her niqab - the full veil some Muslim women wear. According to school officials, it's impossible to critique French pronunciation correctly without viewing a person's mouth.
But what Ms. Ahmed initially thought would be a confidential human-rights complaint quickly became the subject of a media firestorm that gave voice to accusations she refused to work with men and gave presentations with her back to the rest of the classroom.
Ms. Ahmed said that is simply not true.
"This is the first time I felt racism [in Canada]," she said of her experience at the CEGEP, adding that she believes school officials were out to remove her from the beginning. "I went to many places previously where there were no issues - when I went for my driving test nobody told me you can't drive with a niqab."
She added that in her part-time French course prior to the CEGEP class - and in a subsequent class elsewhere - she encountered no issues.
Ms. Ahmed said the incident in which she is alleged to have turned her back on the men in the class was not prompted by her. She said a teacher asked her to give a presentation in front of the class - which contained only a couple of male students, of Bulgarian and Iranian origin - with her niqab removed, which she refused to do.
"[The teacher] said either you take off the niqab, or I'll make the two men face the wall," Ms. Ahmed said.
As a compromise, she raised her niqab but turned away from the edge of the U-shaped classroom seating arrangement, where the two men sat.
Ms. Ahmed said she had no issue taking off her veil when being photographed for her school ID by a female staff member, nor did she have any problem working in groups with the men or participating in other class projects.
"As long as I had the niqab on it made no difference to me," she said.
"If I didn't want to interact, I would have stayed at home." 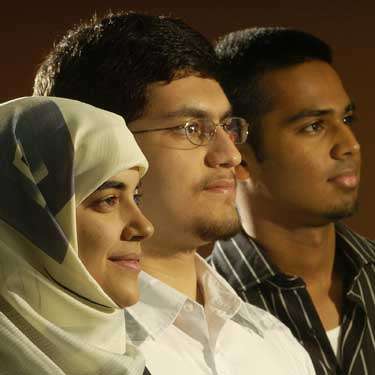 The Case of Shari'ah Law in Canada
(Islam Times) - As large numbers of Muslims continue to establish themselves in the West, they inevitably have to deal with the challenge of secularism....
Islamic school is on ‘a mission’
Muslims arrested for Praying in America
Anti-Islamic Sentiment on the Rise
NY town wants Local Muslims to dig up their Cemetery
A battleground over Islamophobia
Now Canada asks for burqa to be removed
Canadian Muslims and the Global Islamic Movement
Comment
The wealthiest owns Congress and the White House
India Declines Purchase of US Armed Predator-B Drones Despite Pompeo-Esper Push
Instagram Blocks French Account of Ayatollah Khamenei after Holocaust Comment
‘Israeli’ Blackout: Possible Cyber-attack Puts Three Electric Facilities out of Service
Ground Forces Commander: No Breathing Space for Enemies Near Iran’s Borders
‘Israeli’ Military Preparing ‘Ghost Unit’ for the Next War with Hezbollah
“Israel” Concludes “Deadly Arrow” Drill, Shedding Light on Magnitude of Hezbollah Threat
Report: US-Backed SDF Militants Responsible for Smuggling Syrian Crude Oil Killed in Deir Ezzur
The Unrestrained Flagrancy: Pompeo Says US Citizens Born in Al-Quds Can Have ’Israel’ Written in Passport
Casualties, Major Damage Reported After Strong Earthquakes Hit Turkey, Greece
The End of American Power: Don’t Blame Trump, and Don’t Expect Biden to Save It Either
Time to Flee? Bolivia: Áñez Asks US For 350 Visas After Arce's victory
Macron Opens Floodgates for Muslim Backlash as He Insists on Insults
Russia’s Man ‘Who Saved World’
US Court Sends Subpoena to MBS on Assassination Charges
Kashmiris Decry ‘Land Grab’ as India Enacts New Laws
Ayatollah Khamenei: Why Insulting Islam’s Prophet Allowed But Doubting Holocaust A Crime?
500,000 Yemeni Children are in Critical Condition due to Malnutrition, UN Opposes any Action to Alleviate the Deplorable Situation in Yemen!
China Urges US to Abandon “Zero-Sum Mindset” As Pompeo Speaks about Beijing’s “Threat”
Russian Blitz in Syria Warns Turkey to Back Off in Caucasus
Featured Stories