Story Code : 282369
Islam Times - Seven Israeli soldiers who detained a 5-year-old Palestinian boy for “rock-throwing” this week in the West Bank city of Al-Khalil have been cleared of any wrongdoing by their superiors, after a review of video of the incident published on Thursday by the Israeli rights group B’Tselem.
The group said in a statement posted online, along with seven brief video clips recorded on Tuesday afternoon that it had drawn attention to the incident in a letter to the military’s legal adviser for the territory that has been occupied by Israel since 1967.

According to B’Tselem — which provides cameras to Palestinians to help them document the actions of Israeli occupation soldiers — the officers detained the boy, Wadie Maswadeh, for two hours and “threatened the child and his parents, handcuffed and blindfolded the father, and handed the boy over to the Palestinian police. Detaining a child below the age of criminal responsibility, especially one so young, has no legal justification.”

Eytan Buchman, a spokesman for the Israeli military, claimed that occupation soldiers took the boy to his home, and then, with his parents, to a Palestinian police station. “This kid was throwing stones on the street,” Buchman said. “He wasn’t arrested. He was escorted to his parents. A huge difference,” he said. The minimum age for ‘charging’ stone throwers in the West Bank is 12, according to the Zionist military.

Buchman added that the army had reviewed the incident after B’Tselem publicized the video, and found the soldiers had conducted themselves correctly.

At the Israeli base, the father was handcuffed and blindfolded. He said he was interrogated, beaten and fined for his son’s rock throwing.

"The footage clearly shows that this was not a mistake made by an individual soldier, but rather conduct that was considered reasonable by all the military personnel involved,” B'Tselem Director Jessica Montell wrote in a letter to the military’s legal adviser in the occupied West Bank.

“It is particularly troubling that none of them apparently thought any part of the incident was problematic: Not the fact that they scared a five-year-old boy out of his wits, nor threatening him and his parents to 'hand him over', nor threatening to arrest the father on no legal grounds, nor handcuffing and blindfolding the father in front of his son," she added.
Share It :
Related Stories 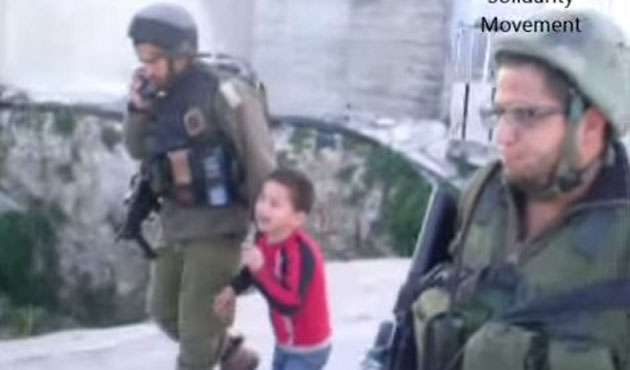