Story Code : 467132
Islam Times - The leader of Yemen’s Houthi Ansarullah movement, Abdul-Malik al-Houthi, says resistance in the face of plots by the US, Israel and Saudi Arabia will culminate in victory for Yemenis.
He said Yemeni people are steadfast in the face of the injustice they are being subjected to amid Saudi military aggression.

Al-Houthi said the US, Israel and Saudi Arabia form a “criminal group,” which is the source of all evil in the Middle East region, adding that the three have no right to intervene in Yemeni affairs.

He said that steadfastness on the part of Yemeni people will protect their dignity against the aggressors. Al-Houthi said resistance may be hard but will end in victory for Yemenis.

He said the role of Israel is clear in the creation of crises in the entire region.

The leader of the Ansarullah movement said Saudi Arabia is wrong in believing that serving the interests of the US and Israel will benefit Riyadh, saying that Tel Aviv and Washington will dump the Saudi regime once it is no more of any use to them.

Referring to the Saudi military aggression against Yemen, al-Houthi said Saudi Arabia has earned itself criminal reputation in history.

He said one result of the Saudi aggression has been that many people in Yemen now feel a stronger sense of responsibility to confront the brutal Saudi attacks. The Houthi leader said the aggressors believed the people of Yemen would yield under the attacks, but were surprised to see their “conspiracy” being firmly confronted by the people.

Had Yemen been taken over by the aggressors, al-Houthi said, it would have been divided into different parts, with each aggressor taking a share for itself. The US, Israel, al-Qaeda and Saudi Arabia would have each taken shares of their own, he said.

However, he emphasized, the steadfastness of the people of Yemen has kept the country together.

Al-Houthi said the al-Qaeda terrorist group is a tool in the hands of the US, Israel and Saudi Arabia in pursuing their agenda for Yemen. “Popular Resistance” is a new name given to al-Qaeda in Yemen, he said.

The Houthi leader said Saudi Arabia would only bring more shame to itself by continuing its military aggression against Yemen.

“He who benefits the most from the Saudi aggression is Israel,” he said.

Al-Qaeda is receiving financial aid from the Saudi regime, al-Houthi said, adding that Saudi Arabia demands that Yemeni forces withdraw from the areas they have under their control, thus, leaving the country in the hands of al-Qaeda.

He said those political factions from Yemen that pin their hopes on Saudi Arabia are making the “wrong bet.”

Referring to the UN-brokered peace talks underway in Switzerland, al-Houthi said there is much talk of “dialogue,” but Saudi Arabia has already violated a previous UN agreement for dialogue.

The aggressors are using the UN as a tool to impose their agenda for Yemen, he said.

All what the aggressors want is chaos and humiliation for Yemen, he said, adding that efforts are being made to obstruct a political solution for the country.

The talks, brokered by UN special envoy for Yemen Ismail Ould Cheikh Ahmed, started on Monday and aim to secure a ceasefire in Yemen, which is also being targeted with military strikes by Saudi Arabia.

A delegation of representatives from three Yemeni parties and political factions, including the Ansarullah movement, is in Geneva attending the UN-sponsored peace talks.

Saudi Arabia launched its military campaign against Yemen on March 26 – without a UN mandate- in an attempt to undermine the Houthi movement and restore power to Hadi, who is a staunch ally of Saudi Arabia.

The Yemeni army along with popular committees, backed by Ansarullah fighters, are fighting terrorist al-Qaeda-linked groups and the ISIL Takfiri militants across the country.
Share It :
Related Stories 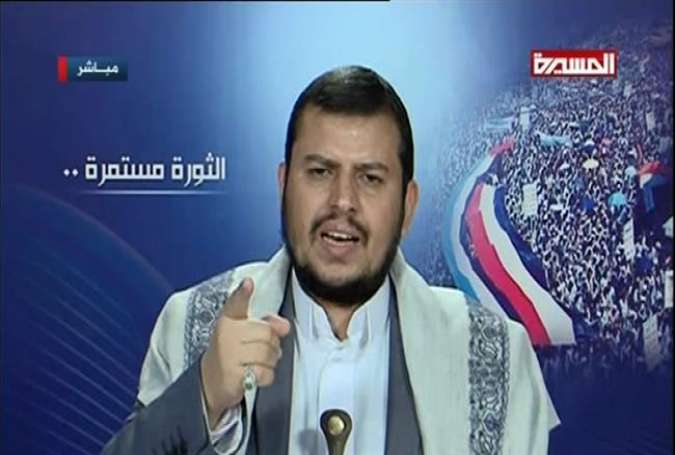