Story Code : 488684
Islam Times - Syrian Foreign Minister Walid al-Muallem says Israel is arming the Takfiri terrorists in Syria and treating the injured militants in its hospitals, criticizing the international community for watching the regime’s actions in silence.
In an address to the 70th session of the UN General Assembly in New York on Friday, Muallem said Israel continues attacking Syria, while the world is standing by and watching the regime arming terrorists and treating them in its hospitals.

Whenever the terror groups suffer losses on the battlefield with Syrian soldiers, the Tel Aviv regime intervenes directly through airstrikes or artillery shelling on the Syria soil, added the Syrian official.

The top Syrian diplomat stressed the significance of the anti-terror battle as a top priority for the Syrian government, warning about increasing terror activities by Takfiri militant groups, such as Daesh and al-Nusra Front, in the Middle East.

He also slammed foreign support for such extremist groups, which seek to expand their acts of violence beyond this troubled region, saying it is the innocent people who are paying the price for such an approach.

“Why do you support them (terrorists) while you know they only produce destruction?” asked the Syrian official, calling on the international community for fulfill its duty and help stop the flow of foreign terrorists to Syria.

He also criticized the role of Turkey, Saudi Arabia and Qatar in backing the extremist groups just like the Israeli regime, saying they are “racing to shed Syrian blood” in different ways.

Muallem described Syria as a strong nation, adding that the Syrian army is making sacrifices to cleanse the country of terrorism.

He emphasized the determination of Syrians in the fight against terrorism, saying the nation’s armed forces are capable of defeating Takfiri terrorist groups.

Muallem said a “Syrian-led national dialog” is the only way out of the foreign-backed crisis plaguing his country, adding that the Syrian nation and army stand united in the face of terrorism.

He emphasized Syria’s commitment to political dialog, but said his country could not adopt measures to boost the democracy in the country, “while terrorism is striking at home and threatening innocents.”

Muallem expressed his country’s preparedness to attend UN talks that would focus on launching negotiations on a peaceful solution to the foreign-backed violence in Syria, stressing, however, that his country would not come to the negotiating table out of weakness.

The fate of Syria lies in the hands of its people, said Muallem, adding that no one could strip the Arab nation of its right to decide its future.

Referring to the air raids carried out by the US-led coalition against purported Daesh positions, saying such raids are “useless” unless they are coordinated with the government in Damascus.

He hailed Russia’s air raids against Daesh positions in Syria, which came at the request of the Damascus government, describing Moscow’s military assistance as an “effective participation” in Syria’s fight against terrorism.

“Terrorism cannot be fought only from the air and all of the previous operations to combat it have only led to its spread and outbreak. Air strikes are useless unless they are conducted in cooperation with the Syrian Arab Army, the only force in Syria that is combating terrorism,” Muallem said.

Syrians stand by Palestine cause

Elsewhere in his comments, the Syrian foreign minister voiced his country’s support for the Palestinian cause, saying the oppressed Palestinian nation has the right to return to its homeland, which is occupied by the Israeli regime, and establish an independent state there.
Share It :
Related Stories 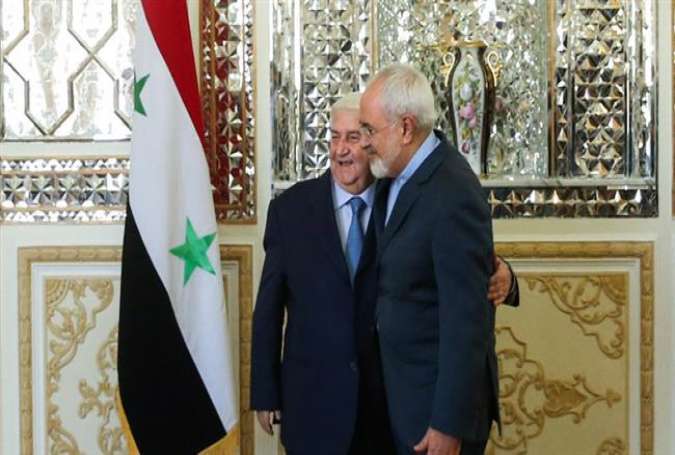