Story Code : 568350
Islam Times - Leader of the Islamic Revolution Ayatollah Seyyed Ali Khamenei says absolute distrust in hegemonic powers topped by the United States is an important component of Iran's soft power and this distrust must increase on a daily basis.
The Leader made the remarks in a meeting on Sunday with commanders and high-ranking officials of the Islamic Revolution Guards Corps (IRGC) in Tehran.

The Leader added that absolute distrust in Washington was the outcome of rationality stemming from thought and experience, saying, “We have seen the issue of America’s hostility during long years after the [victory] of the [1979 Islamic] Revolution and [also] during the recent nuclear negotiations and in other issues.”

Ayatollah Khamenei emphasized that protecting the country’s security inside and outside Iran’s borders was one of the fundamental duties of the IRGC.

Noting that in addition to security and defense sectors, the IRGC also plays an important role in different other fields such as construction, development, providing aid to the needy as well as issues related to culture and art, Ayatollah Khamenei said such measures should continue to be taken and the general public must be informed of them.

The Leader stated that the IRGC must not be content with its progress in the fields of science and technology and must not stop breaking new grounds as the enemy keeps changing its means and making advances.

The Leader then described maintaining the country’s security as a very important issue, which prepares the ground for spiritual and material progress of the entire nation.

“Protecting internal and foreign security is among the IRGC’s [most important] duties and if there is no external security and the enemy is not stopped outside the borders, internal security would also be lost.”

Ayatollah Khamenei stressed that the Iranian Armed Forces must boost their power on a daily basis in order to counter military threats against the Islamic Republic, saying, “’Defense and military power’ and ‘striking fear and terror’ in the [heart of the] enemy have been and will be the only factors that fend off any military threat.”

Mentioning faith as the main factor behind strengthening the country’s defense capability, the Leader said this is the real meaning of asymmetric warfare, because in spite of having state-of-the-art tools and equipment, it lacks faith.

Ayatollah Khamenei further stated that denying the concept of the country’s independence and considering it as equal with isolation were among major cases of distorting the components of the Islamic establishment’s soft power.

“The main reason behind denying the concept of independence is to follow [regional] orders delineated by the arrogant powers, which unfortunately, some people are knowingly or unknowingly repeating this issue,” the Leader added.

Stressing that “independence, culture and [religious] beliefs” shape a nation’s identity, Ayatollah Khamenei urged Iranian officials to remain vigilant in the face of the enemy’s plot to infiltrate into and dominate the country.

“Americans insist that we negotiate with them on issues related to West Asia region, particularly [the ongoing situations in] Syria, Iraq, Lebanon and Yemen. What is their real goal behind these requests for negotiation? They have no goal but to prevent the Islamic Republic of Iran’s presence in the region as the main factor behind America’s failures,” the Leader said.

Referring to certain remarks about the need to negotiate with the United States about regional issues, Ayatollah Khamenei said, “Negotiations with America are not only fruitless, but also harmful,” because they will clear the way for US infiltration.

The Leader further stated that enemies are angry with the Iranian nation because the Islamic Republic is a source of inspiration, adding, “despite all pressures, sanctions and threats,” the movement of the Iranian nation has become more transparent and braver on a daily basis.
Share It :
Related Stories 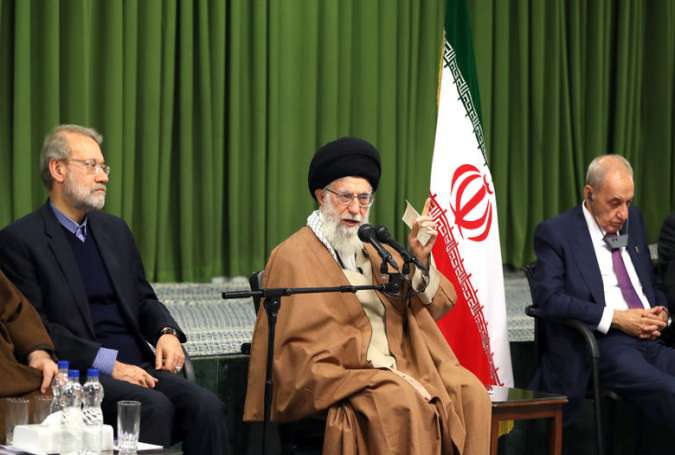