Story Code : 627792
Islam Times - There has been an unprecedented escalation of sabre rattling between the United States and North Korea with China warning that war is imminent.
In its most recent statement, North Korea has warned it will strike US military bases in Japan and South Korea, as well as the South Korean president’s residence in Seoul, if America engages in aggression against Pyongyang, North Korea’s General Staff warned, according to state news agency KCNA.

US to be ruthless ravaged

North Korea’s military promised to “ruthlessly ravage” the US if the American aircraft carrier group that is currently on its way to the region takes aggressive action.

“Our toughest counteraction against the US and its vassal forces will be taken in such a merciless manner as not to allow the aggressors to survive,” a statement from the military said.

“The Trump administration, which made a surprise guided cruise-missile strike on Syria on April 6, has entered the path of open threat and blackmail,” the statement added.

The General Staff noted that, American military bases in the Pacific, Guam, the island of Okinawa, which hosts the bulk of US troops in Japan, as well as the US mainland, are all within reach of North Korea’s strategic missiles.

With a US Navy strike group led by the aircraft carrier Carl Vinson circling to the region, North Korea’s vice minister, Han Song-ryol, said on Friday that the United States was “becoming more vicious and aggressive” under President Donald Trump and that “we will go to war if they choose.”

Han said whether North Korea holds another nuclear test would be “something that our headquarters decides.” But he added an ominous coda: “At a time and at a place where the headquarters deems necessary, it will take place.”

In accordance with the order, 600,000 people should be urgently evacuated. Experts note that the evacuation will most likely be conducted due to extremely strained tensions in relations with the US. The evacuation was necessitated by the fact that; Pyongyang's bomb shelters will not be able to accommodate the entire population of the North Korean capital

On Friday, neighboring China’s foreign minister, Wang Yi, warned that tensions between the US and North Korea had escalated to such a point that “a military conflict may start at any moment.”

“Lately, tensions have risen,” Wang said, adding “if a war occurs, the result is a situation in which everybody loses and there can be no winner.”

“The United States and South Korea and North Korea are engaging in tit for tat, with swords drawn and bows bent, and there have been storm clouds gathering,” he added in Beijing, according to Xinhua, the state news agency.

Russia has also called on urged all parties involved in the crisis in the Korean Peninsula to show "restraint", warning of any "provocative steps."

"Moscow is watching with great concern the escalation of tensions on the Korean peninsula," Kremlin spokesman Dmitry Peskov told reporters on Friday.

"We call for restraint from all countries and warn countries not to pursue actions that could consist of any provocative steps."

South Korea has meanwhile warned North Korea against engaging in a nuclear or missile test, to mark the ‘Day of the Sun’, the 105th anniversary of the birth of North Korea’s state founder Kim Il Sung, which the country will celebrate on Saturday. Kim Jong Un's government has pledged "a big and important event" for the Saturday anniversary. In recent years, it has marked the date with rocket and missile tests. Meanwhile a belligerent Trump and his aides have said the US will address the North Korea on its own if China doesn't. "If China can help us do that, it'll be great," White House spokesman Sean Spicer said. "And if not, we'll go and handle that ourselves with our allies."

US, source of Korean Peninsula tensions

Tensions between Pyongyang and Washington go back to the 1950-53 Korean War, which ended in an armistice, not a peace treaty. But the heat has been rising rapidly since January when controversial US President Trump took the reign of power in Washington.

Over 28,500 US troops, sailors, airmen and Marines in South Korea and now an armada of warships are a major source of tensions in the Korean Peninsula region and a pointer to Washington’s policy of provoking other countries in the region especially North Korea.
Source : http://alwaght.com/en/
Share It :
Related Stories 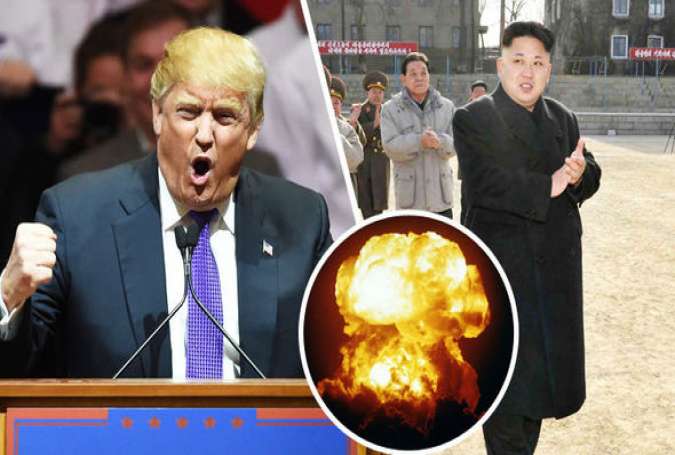