An expansion of laws and policies since 2001 has given the U.S. Treasury Department in particular virtually unchecked authority to designate charities as terrorist organizations and freeze assets without adequate safeguards to protect against mistakes or abuse, the study concluded.

It said that such sweeping powers, combined with the FBI interviewing Muslim donors and putting mosques under surveillance, has created a climate of fear among Muslims. Donors have been reluctant to fulfill their religious obligation to give zakat, or charity, one of the "five pillars" of Islam, for fear of being arrested, deported, denied citizenship or prosecuted retroactively for donations made in good faith.

"Giving charity is a central part of being Muslim, so it weighs heavily on them that they cannot practice a key tenet of their faith," said ACLU researcher Jennifer Turner, who based her findings on interviews with 120 Muslim community leaders, donors and former government officials.

In a statement, the Treasury Department, which is responsible for oversight of charitable activity, said it attempts to help the charitable community protect against terrorist abuses.

"We're hopeful this ongoing communication will ensure all charitable groups, regardless of religious affiliation, have the ability to provide assistance where it's needed most, without empowering terrorist organizations," the agency said.

In his speech in Cairo this month, President Obama addressed the oversight of Muslim charities, saying the "rules on charitable giving have made it harder for Muslims to fulfill their religious obligation. That's why I'm committed to working with American Muslims to ensure that they can fulfill zakat."

Civil libertarians and Muslim advocates say the Obama administration has yet to take steps to address the problems.

The ACLU said that federal policies have led to the closure of nine Muslim charities in Texas, Michigan, Illinois, Massachusetts, Oregon and other states.

The leaders of one former charity, Holy Land Foundation for Relief and Development, were convicted in November of funneling more than $12 million to the Palestinian militant group Hamas. The U.S. has designated Hamas a terrorist organization, making contributions to it illegal. Two founding members of Holy Land, once the nation's largest Muslim charity, were each sentenced last month to 65 years in prison.

Still, Muslim advocates and the ACLU said the government has seized the assets of other charities without charging them with a crime. Such an approach has driven charitable giving underground and undermined U.S. diplomatic efforts in Muslim countries, they said.

"This is an issue that not only goes to religious giving, but we see this as critical to our continued integration and participation in American public life," said Farhana Khera, executive director of Muslim Advocates, a legal advocacy and education organization based in San Francisco.

"To be engaged in public life, we need to feel comfortable supporting our community institutions," she said.
Source : LA Times
Share It :
Related Stories 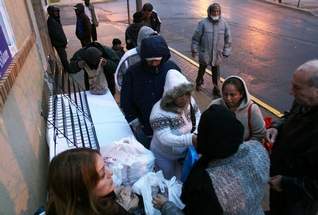 Unemployed father, son, 3, among needy fed in Plainfield, thanks to Islamic nonprofit
In one hand Victor Bastidas held the hand of his 3-year-old son, Kerbin. In the other he clutched a blue plastic bag full of fresh meat.
Police believe they know culprit in anti-Islam incident
Man says threats against Muslims were to 'defend America'
US Islam Charity -1; Bush - 0
Sheriff wants hate crimes indictment in beating
Ekram Haque killed by Racist Gang Outside Mosque
Mich. court may vote on Muslim face veil issue
Muslims in the west