Venezuela 'coup' grew from secret talks in US

Story Code : 774583
Islam Times - The political crisis which came to a head in Venezuela this week followed "weeks of secret diplomacy," including a visit last month to the US, Colombia and Brazil by opposition leader Juan Guaido.
Guaido declared himself the interim president earlier this week and won immediate recognition from the US, in a move denounced by President Nicolas Maduro and a number of countries as a coup.

During a televised speech in Caracas on Friday, Maduro accused the self-declared president of working on behalf of the United States, calling him "an agent of the 'gringos' in Venezuela."

"They trained him as an agent and they put him in politics. He is an agent of the government of the United States, he knows and will receive and will fulfill orders from them," said Maduro.

According to the Associated Press, Guaido quietly traveled to Washington, Colombia and Brazil in mid-December to brief officials on his plans to provoke unrest to coincide with Maduro’s swearing-in for a second term on January 1.

Playing a key role behind the scenes was Canada, whose Foreign Minister Chrystia Freeland spoke to Guaido the night before Maduro’s swearing-in to offer support should he confront Maduro, AP reported.

At least 20 people have lost their lives in the unrest, but the planned "coup" has hit the wall after the army rallied behind Maduro and countries like Russia, China, Turkey and Iran denounced outside interference.

According to an anonymous diplomat from the so-called Lima Group of 14 Latin American countries, some opposition elements had been anxious about the putsch going awry as Guaido's plan was endorsed for implementation.

"Some moderate factions were left in the dark or wanted to go slower, worrying that a bold move would lead to another failure for the opposition," AP quoted him as saying.

Guaido, the president of the opposition-run congress, proclaimed himself interim president on January 23. Within 24 hours, the US recognized him and announced $20 million in "humanitarian aid."

A senior Canadian official told the news agency that the decision to confront President Maduro directly was only possible because of strong support from the Trump administration.

While the US says it's trying to rescue Venezuela's democracy, Washington has a long history of interventions - military and otherwise - in Latin American politics.

The Trump's administration leading role in recognizing Guaido as the interim president of Venezuela returns the US to a more aggressive role in Latin America than it has had for years.

“Trump has personally sparked a lot of this,” Fernando Cutz, a former senior national security adviser on Latin America to US Presidents Barack Obama and Trump, told AP.

“Literally in every interaction that he has had with Latin American leaders since taking office, he brings up Venezuela. That has forced a lot of hands,” Cutz said.

President Trump said in August last year that a “military option” was on the table to deal with the ongoing Venezuelan crisis.
Two drones packed with explosives reportedly flew toward Maduro in August in what the government has described as a failed assassination attempt.

On Saturday, Russia, China, South Africa and Equatorial Guinea blocked a US push for a UN Security Council statement expressing full support for Guaido even as he has not run in any presidential race.

Russia has accused the United States of backing a coup attempt, placing Venezuela at the heart of a growing geopolitical duel.

In a speech at the UN Security Council, US Secretary of State Mike Pompeo called on the world countries to "pick a side" on Venezuela and urged them to back Guaido.

"Now, it is time for every other nation to pick a side. No more delays, no more games. Either you stand with the forces of freedom, or you're in league with Maduro and his mayhem," Pompeo told the 15-member council.

Maduro was sworn in for a second term earlier in January, after a vote marred by an opposition boycott and claims of vote-rigging.

Oil-rich Venezuela is currently mired in economic turmoil, with people grappling with hyperinflation, power cuts and shortages of basic items.

Maduro and his supporters accuse the US for being behind the country’s economic crisis as part of its bid to topple the government.

US national security adviser John Bolton, who is known for his hawkish views, said on Thursday that Washington is making every attempt to cut Venezuela’s revenue streams, and make sure the oil revenue goes to the opposition leader.

"We think consistent with our recognition of Juan Guaido as the constitutional interim president of Venezuela that those revenues should go to the legitimate government,” he added.
Share It :
Related Stories 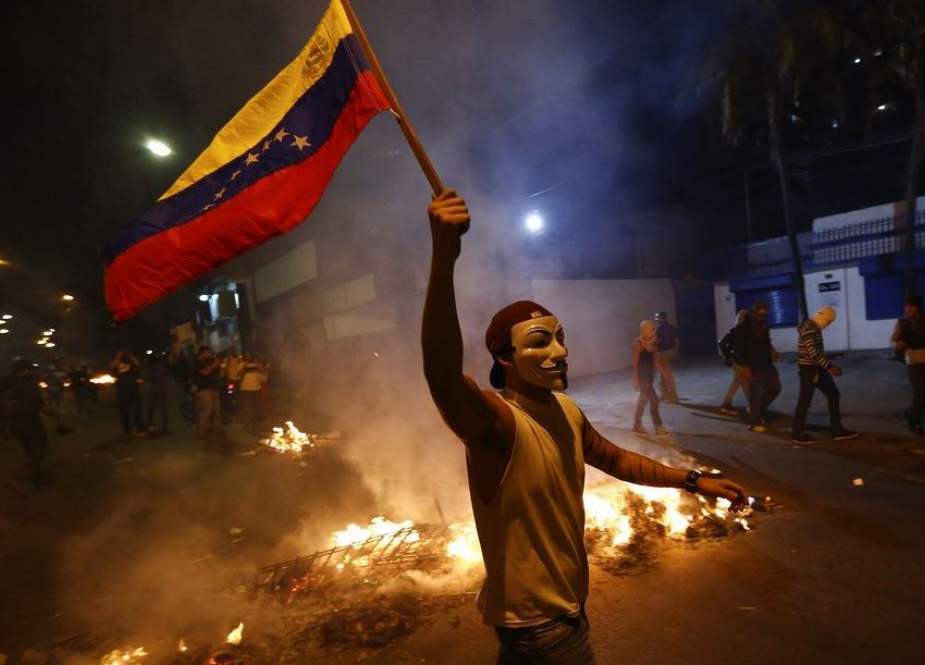