Story Code : 801529
Islam Times - US President Donald Trump has said that he does not need congressional approval to strike Iran, rejecting House of Representatives Speaker Nancy Pelosi’s assertion that any American military action against the Islamic Republic required approval from Congress.
The US president made the remarks in an exclusive interview with Hill.TV outside the Oval Office of the White House in Washington, DC.

When asked if he believes he has the authority to launch war against Iran without congressional approval, Trump said, "I do."

"But we’ve been keeping Congress abreast of what we’re doing ... and I think it’s something they appreciate," he said. "I do like keeping them abreast, but I don’t have to do it legally."

Trump disputed Pelosi’s assertion that he would need congressional approval for any “hostilities” against Iran.

"I disagree," he said. "Most people seem to disagree."

"They have ideas. They’re intelligent people. They'll come up with some thoughts," Trump said, referring to members of Congress. "I actually learned a couple of things the other day when we had our meeting with Congress."

Many in Washington expected Trump to take military action against Iran in response to the recent downing of a US surveillance drone by Iranian forces, especially since he had already sent an aircraft carrier strike group, several long-range bombers and even more American troops to the region.

However, despite calling it a “very big mistake” by Tehran, Trump backed out of the war rhetoric he had spewed over the past few months and even thanked Iran for not downing a “manned” plane that was flying in Iranian airspace around the same time.

Trump also warned that with the US military “rebuilt,” military action was always possible. He even noted that he was ready for direct talks without any preconditions.

After signing the executive order regarding sanctions, Trump said, “We will continue to increase pressure on Tehran, until the regime abandons its dangerous activities.”

But then he added, “We do not seek conflict with Iran or any other country.”
Share It :
Related Stories 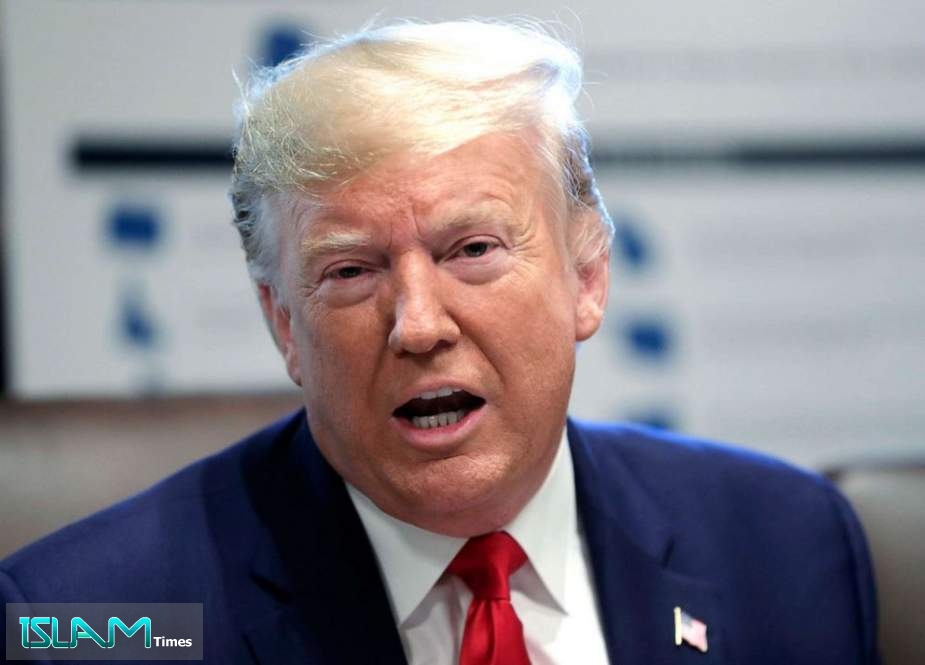 Trump Right to Purge Intel
Islam Times - It now seems that Donald Trump’s surprise appointment of Richard Grenell as the new acting Director of Intelligence is motivated by a purge against Russophobes in the Deep ...
Trump Ally Roger Stone Sentenced to More Than 3 Years in Prison
Trump Officials Consider Power-Sharing Plan to Oust Maduro
Trump Offered Julian Assange a Pardon if He Covered Up Russian Hacking of Democrats
Trump Names Richard Grenell as Acting Head of Intelligence
Trump is not the Warlord-in-chief in spite of what he thinks
Trump Contradicts Past Denials, Admits Sending Giuliani to Ukraine
Trump’s Brink of War with Iran Spun on a Lie
Comment
Yellow Vests Hit Streets of Lille in 67th Week of Protests in France
Syrian Air Defences Will Shoot Down Any Aircraft Violating Country's Airspace
Two Iranian Border Guards Killed in Clashes with Terrorists in Southeast
Israeli Occupation Forces Shot and Killed a Palestinian in Al-Quds
Sanders Slam Russia for Reportedly Meddling in US 2020 Elections
What We, the Taliban, Want
With Bloomberg Entering Race, U.S. Oligarchy Takes Stage
China To Maintain Close Communication and Cooperation with Iran to Defeat the Coronavirus
US ‘Playing Games’ With Taliban Peace Talks, Has ‘No Intention of Leaving Afghanistan’ - Academic
Russia Rejects Allegations It Carried Out Cyber Attack on Georgia
Creator Of BioWeapons Act Says Coronavirus Is Biological Warfare Weapon
People Rejoice as Syrian Army further Secure Aleppo Countryside