Chinese Censorship of US Media: New Spin on an Old Tactic

By Justin Anderson
Story Code : 823243
Islam Times- With China now the world’s largest economy, US media companies are increasingly looking at the country’s 1.4 billion consumers with dollar signs in their eyes. But access to this media market comes with one big rule: Don’t upset the Chinese government. This is most evident in the realm of blockbuster movies, where films that could run afoul of Chinese state censors are amended, rewritten or scrapped. But other media or media-dependent industries have come under the sway of the Chinese government and its massive market power.

On October 6, Daryl Morey, general manager of the Houston Rockets pro basketball team, tweeted: “Fight for freedom, stand with Hong Kong.” Morey was referring to the ongoing protests in Hong Kong against proposed changes to Hong Kong’s extradition laws, which would allow dissidents in the semi-autonomous island city to be tried in Mainland courts. Since their start in June, the protests have expanded to encompass the wider political relationship between Beijing and the city.

While in theory Hong Kong maintains a degree of independence under the “one country, two systems” principle agreed to after Britain returned its former colony to China in 1997, in practice the ruling Chinese Communist Party exercises a great deal of control over Hong Kong’s governance.
Morey deleted his comment shortly after posting and apologized the following night, and the NBA swiftly disavowed his views, calling them “regrettable.” The league’s statement was buttressed by new Brooklyn Nets owner (and co-founder of the Chinese internet company Alibaba) Joseph Tsai, who penned a letter expressing support for Chinese sovereignty in Hong Kong, and saying there is genuine popular resentment in China toward outside forces who are seen as trying to split up the country.

There are immense sums of money at stake for the NBA in China, where basketball is the most popular sport. The league hosts preseason and minor league games in the country, has numerous players partnering with Chinese companies like Li-Ning and, most importantly, broadcasts games to almost 500 million people in China through its $1.5 billion deal with Chinese tech giant Tencent.
Despite the NBA trying to perform damage control, China still flexed its muscles; the Chinese Basketball Association suspended its relationship with the Rockets, while state television operator CCTV cancelled the broadcast of two NBA minor league games that were to be played in China.

A few days later, the Rockets shut down CNN reporter Christina Macfarlane, who asked players China-related questions in a post-game press conference, requiring that she ask “basketball questions only.” Disney, the owner of ESPN, also seemed content to toe the Chinese government line. On Sportscenter’s October 9 morning show, in advance of the Lakers/Nets preseason game in Shanghai, the network broadcast a graphic showing a map of China that included the maximum extent of its disputed territorial claims, including Taiwan, India’s Arunachal Pradesh and the so-called Nine-Dash Line encompassing the South China Sea. 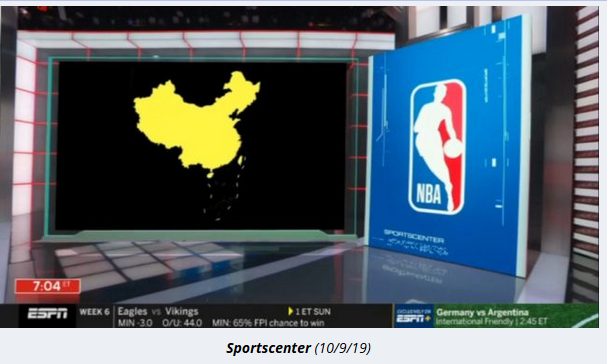 The power of the Chinese banhammer has also extended into the realm of videogames. Acquiescing to Chinese pressure, videogame conglomerate Activision Blizzard suspended professional Hearthstone player Chung Ng Wai, who plays the fantasy card game under the name Blitzchung. Chung, a native of Hong Kong, showed support for the protests by repeating the slogan “liberate Hong Kong, revolution of our time,” and donning a gas mask (now banned in Hong Kong) in an official interview after a tournament win. Blizzard also declined to pay out Chung’s winnings from the tournament, and fired the interviewers.

A recent episode of South Park (10/2/19) found the show’s characters in a similar free-speech predicament. Stan and his friends start a rock band and attempt to get a biopic made, only to find that the movie studio producing their film bow to the whims of the Chinese government, who demand numerous script rewrites and removal of references to the Dalai Lama and homosexuality. As the biopic’s director tells Stan, “You gotta lower your ideals of freedom if you wanna suck on the warm teat of China.”

The Chinese government obviously didn’t take kindly to being made fun of by South Park creators Trey Parker and Matt Stone. The government quickly removed episodes, clips and mentions of the show from the Chinese internet. Parker and Stone responded on Twitter (10/7/19) with a mocking apology:
Like the NBA, we welcome the Chinese censors into our homes and into our hearts. We too love money more than freedom and democracy. Xi doesn’t look just like Winnie the Pooh at all. Tune into our 300th episode this Wednesday at 10! Long live the Great Communist Party of China! May this autumn’s sorghum harvest be bountiful! We good now China?
Even those who showed minimal support for South Park’s protest against Chinese incursions on media free speech have seen repercussions. Popular German DJ Zedd, after liking a tweet from South Park’s official Twitter account, was subsequently banned from performing his music in China.

China is not the only entity, or even foreign country, with the ability to influence or exercise veto power over what content major US media companies can produce. The ruling monarchy of Saudi Arabia has frequently used its oil wealth to influence portrayals of its regime. The Saudi government just recently paid Vice media to produce fluffy PR documentaries to play up the reforms of Crown Prince Mohammed bin Salman. Many other media outlets, such as the Wall Street Journal, CNN, NBC and the Washington Post (the former employer of journalist Jamal Khashoggi, whom the Saudi government murdered), are regularly lobbied by Saudi foreign agents hoping to influence US press coverage of the country. The combination of the Saudi Arabia’s sizeable checkbook and the intimate economic and political relationship that the US maintains with the country surely plays a large part in shaping media coverage of the country (CounterSpin, 4/22/16).
Israel has also exercised influence over what media are OK for distribution in the US and the rest of the world. Last year, pressure from pro-Israel officials stopped the broadcast of an Al Jazeera–produced documentary The Lobby, which detailed the financial and political power of Israel’s advocates in DC political circles.

Israel has in the past barred major US news outlets like CNN from reporting on issues in the occupied territories of the West Bank. Likewise, large US-based tech platforms such as Facebook and Twitter have regularly censored Palestinian users on behalf of the Israeli government, which has threatened litigation against the companies if they didn’t comply.

Facebook in particular has an official policy of acquiescing to the demands of governments such as Indonesia, Pakistan and Myanmar when users run afoul of those governments’ own speech policies. Adherence to such rules can lead to violence and internal repression of people and groups that these governments disdain. For all the talk of media and tech platforms like Facebook being unaccountable transnational entities that are tough to govern, they seem to respect the prerogatives of many of the authoritarian countries in which they operate.

The US national security state, of course, has a long history of involvement and say over what content is acceptable in Hollywood, the videogame industry and the US news media.

The Department of Defense frequently grants film productions access to equipment, vehicles and locations. The huge price tag for military equipment like jet planes or high-tech weaponry—paid for by taxpayers—functions as an effective subsidy for the US film industry. Yet Pentagon involvement comes with the catch that movie scripts must pass muster with the DoD’s Hollywood liaison, who makes sure that the producers sign and adhere to the terms of the military’s Production Assistance Agreements. The CIA and NSA’s Hollywood liaisons oversee similar processes. At least 1,800 movies, documentaries and TV shows have been produced under the watchful eye of the US military, while others were abandoned due to lack of military support.

As with war films like Top Gun and American Sniper, the US military sees videogames as effective recruiting and training tools. Indeed, the military has long been heavily involved in the videogame industry, both releasing official videogames themselves and consulting on massively popular games such as Call of Duty.

Some see this military/entertainment complex as a good thing, at least when placed in the context of US soft-power competition with China. In a recent piece for the Atlantic (9/15/19; FAIR.org, 10/3/19), Boston College’s Martha Bayles argued that the US should ramp up cooperation between the military and media to compete globally with China, whose growing media influence helps them project power.

In addition to movies, TV and videogames, the US military also funds other entertainment entities, like the NFL, which uses the money for troop tributes and jet flyovers during pregame shows. Accordingly, the NFL has often taken a hard line against players who speak their mind on select political issues; the league essentially blackballed former 49ers quarterback Colin Kaepernick for kneeling during the national anthem to protest police brutality, which many on the right misinterpreted as a hostile gesture towards the US military.

US news media are also far from immune from government influence. There is a long history of wartime censorship of correspondents embedded with troops—indeed, in World War I and II, there was literally a government agency called the Office of Censorship. Such press censorship continued through America’s later wars, including Vietnam, all the way through the wars in Iraq and Afghanistan, where film crews and embedded reporters were directed by military personnel to report stories in ways that adhered to the military’s official line.

Other government branches have influenced press coverage. The censorship and blackballing of Communists and suspected Communists in Hollywood and broadcasting during the McCarthy era is well known. The CIA, through its Operation Mockingbird, also paid and intimidated both domestic and foreign reporters into writing stories that would support the agency and their aims.

The Chinese government’s ability to set the terms of free speech in the US media and entertainment sphere is surely alarming. The far-reaching censorship powers the Chinese state has over internet and other media both inside and outside the country is truly frightening. China might be a unique example in the history of media censorship and influence: Never before has a country deemed a US antagonist exercised such financial power over the media conversation.

However, fears of Chinese censorship might be overreported in comparison with the long history in the US of media censorship at the behest of the US military, government agencies and other foreign countries. Chinese influence over US media shouldn’t be ignored, but air must also be given to the myriad other ways in which other entities, like the US government, “friendly” foreign countries and large tech platforms, control and influence what counts as acceptable speech.