Story Code : 829146
Islam Times - Anti-government protests in Iraq were escalated on Monday following a period of calm amid persisting discontent with economic conditions.
Protesters lit fires in several streets of the capital Baghdad. They also blocked some roads there.

To the south in the holy city of Karbala, protests turned violent after a group of the demonstrators hurled projectiles at police officers.

In the southern city of Basra, the majority of main streets were closed, with protesters burning tires and setting traffic blockades around the city.

Schools, government offices and official departments in a number of southern regions were closed as protesters declared a general and comprehensive strike for all government institutions and departments in Basra.

Anti-government protests made a return in Iraq on Sunday, when a total of six Iraqi people lost their lives in renewed clashes with security forces.

The demonstrations were the latest in rallies that began in October against corruption and poor economy in Iraq.

The rallies resumed later in the month after a pause of about two weeks, but took a violent turn, with some participants vandalizing public property and opening fire on demonstrators during the mayhem.

Over 300 people have been killed in the Iraq unrest since October 1, according to the Iraqi parliament’s human rights commission. 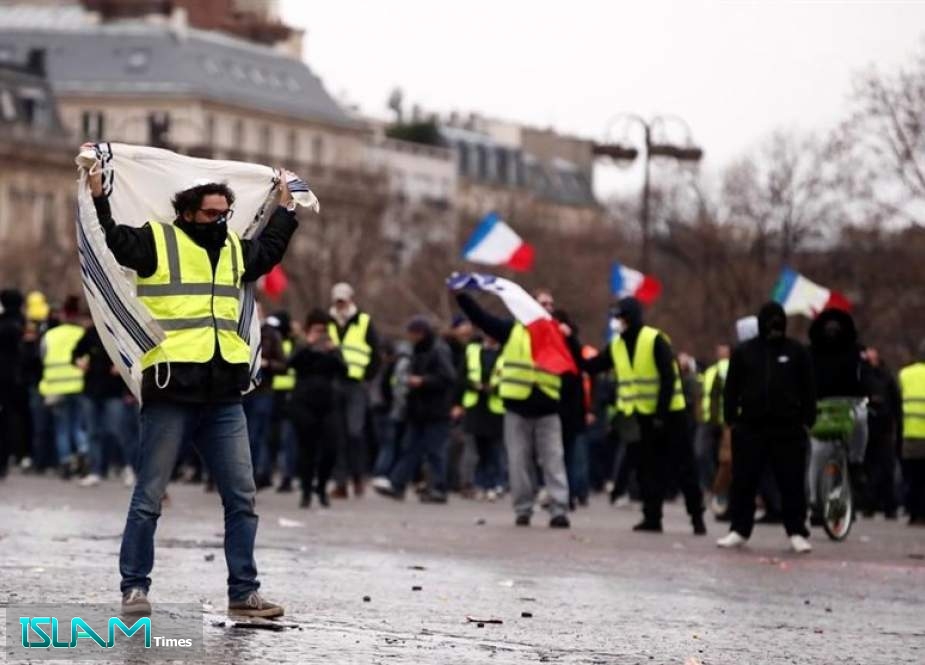 Anti-Macron Protesters March in Paris for New Round of Demonstrations
Islam Times - Hundreds of anti-Macron protesters took to the streets of the French capital on Saturday in a new round of 'Yellow Vest' demonstrations....
Anti-US Protest Rallies in Syria End in Clashes with Kurdish Militants
Anti-Racism Movement in View of Ayatollah Khamenei’s Letter to Western Youth
Anti-Communism Is A Fundamentalist Religion, Now Followed By Billions
Anti-Lockdown Protests around the World

Anti-BDS resolution in US Congress shows Israel’s grip on US foreign policy: Analyst
Comment
Malaysia’s Anwar Claims to have Majority to Form New Government
US Bully in Last Chance Saloon
The Censored Reason Why the US Would Torpedo the UN over Iran: Iranian Strength
Facebook to ’Restrict Circulation of Content’ If Unrest Follows US Presidential Elections
Road to Saudi Ties with ‘Israel’ Being Paved, Cautiously
Ex-‘Israeli’ Military Officials’ Pre-normalization Gulf Entanglement
Rouhani: US Can Impose Neither Negotiations, Nor War on Iran
IED Explosion in Syria’s Quneitra Causes Material Damage
IRGC Naval Drone Detects US Carrier Strike Group near Hormuz Strait
200,000 Dead as Trump Vilifies Science, Prioritizes Politics
Iraq’s Sadr: Israel Would Mark Own Ending by Opening Embassy in Baghdad
Rights Groups: UAE Hires Thousands of Mercenaries to Carry Out Assassinations in S Yemen
Possible Targets for Taking Revenge for Gen. Soleimani
2,000 Days Since It Began, the War in Yemen Is Poised To Turn Even More Deadly
Why Is Iraq’s Al-Kadhimi Pushing To Cozy Up To Kuwait?
EU Parliament Urges Arms Embargo on Saudi Arabia
SA Minister: US Report of Iran’s Assassination Plot ‘Bizarre’
Ayatollah Khamenei: Sacred Defense Established Security in Iran, Enemies Will Pay Dearly If They Invade Country
Five Nations Are Weighing Normalized Ties to ‘Israel’: Trump Aide
How US Takes Advantage of Terrorism for Purpose of Its Hegemony!
Featured Stories