Story Code : 833600
Islam Times - Iranian President Hassan Rouhani emphasized on Wednesday it was necessary for Muslim countries to cooperate in order to fend off pressures by big powers, particularly the US.
“Many problems facing Muslims are due to the interference of the US, including the sanctions against Iran,” Rouhani said during a meeting with Malaysian Prime Minister Mahathir bin Mohamad in Kuala Lumpur.

Rouhani, who is in Malaysia to attend the Kuala Lumpur Summit, criticized the US for imposing “unilateral and cruel sanctions” on Iran, saying Washington left the 2015 nuclear deal between the Islamic Republic and major world powers without any justification and placed bans against Tehran despite UN Security Council Resolution 2231, which endorses the nuclear agreement, known as the Joint Comprehensive Plan of Action (JCPOA).

Stressing that sanctions will fail to dent Iran’s determination to boost ties with other countries, Rouhani underlined the need for Tehran and Kuala Lumpur to shore up ties in different sectors, including science, technology, energy, industry, tourism, information technology and medicine.

He expressed hope that the Kuala Lumpur Summit would come up with solutions to challengers facing Muslim countries, particularly Middle Eastern states.

The Malaysian prime minister, for his part, called for expansion of ties with Iran in all sectors, expressing his country’s strong determination to increase trade ties with Tehran.

He said that sanctions have affected trade ties between the two countries but said his country was thriving to re-boost trade cooperation with Iran.

“We will continue our trade and economic ties with Iran,” he said.

Good to be in Kuala Lumpur with Pres. @HassanRouhani to attend #KLSummit2019

Held fruitful mtgs with King Abdullah and PM Mahathir Bin Mohamad (@chedetofficial) on bilateral relations, regional affairs, and the state of of the Islamic world

Also a warm get together w/ Iranians. pic.twitter.com/XPKZGjSxoO

He also rejected the “illegal sanctions” against Iran as a contravention of UN regulations, but expressed optimism that Tehran will surmount the pressures of the US and Europe.

He said the Kuala Lumpur Summit provided an opportunity for Muslim countries to share their experiences.

In May 2018, US President Donald Trump unilaterally pulled his country out of the JCPOA signed between Iran and major world powers in 2015, in defiance of global criticism, and later re-imposed the sanctions that had been lifted against Tehran as part of the agreement.

In response, Iran has so far rowed back on its nuclear commitments four times in compliance with Articles 26 and 36 of the JCPOA, but stressed that its retaliatory measures will be reversible as soon as the European signatories — France, Britain and Germany — find practical ways to shield mutual trade from the US sanctions.

Last Wednesday, Rouhani, speaking at a weekly cabinet session in Tehran, said his administration is determined to surmount the sanctions against the country through different means but will not compromise its red lines.

“We should either bypass the sanctions or compel the enemy to repent, and the administration is determined to frustrate this plot (sanctions) both through boosting domestic production and other different means like negotiations,” Rouhani said. “But in doing so, the administration will act in line with the establishment’s red lines and will not cross them.”

Separately on Wednesday, Rouhani met and held talks with Malaysian King Abdullah of Pahang, during which the two sides called for further promotion of ties in different sectors, especially economic and cultural cooperation.

Rouhani told the Malaysian King that the key to settling woes facing Muslims were solidarity and cooperation.

He added that Palestine, interference of big powers in the domestic affairs of Muslims countries and the need for promotion of scientific and economic progress were among the most important issues that needed to be addressed. 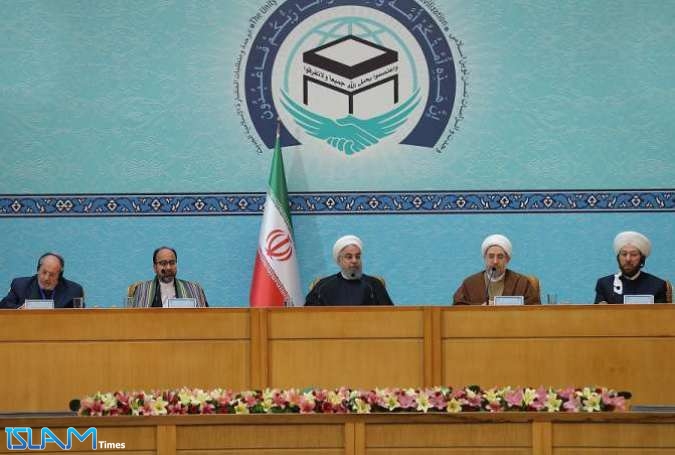