Story Code : 840904
Islam Times - Five rockets have landed in Baghdad's Green zone, with at least 3 of them directly hitting the US embassy in the Iraqi capital city, according to security sources. There’s no official word yet on casualties or damage.
The missiles hit Baghdad’s heavily-fortified Green Zone, media report, citing security sources one of which said that all five ‘Katyusha rockets’ had landed near the compound, while another put the number of projectiles at three – but described it as a ‘direct hit’.

The unguided volley targeted the US mission late on Sunday. Warning systems at the facility were activated and people were advised to seek shelter.

Iraq's Al Sumaria TV reported, citing a security source, that there were several casualties resulting from the attack and that helicopters were working to evacuate those inside the embassy and on its territory.

US aircraft were spotted flying over the scene and then landing inside the embassy compound, the agency added.

Baghdad's "green zone", where the US embassy is currently located, has recently been the target of several attacks. The latest one occurred just earlier in the day when three Katyusha rockets fell near the American embassy, Al Sumaria TV reported, with no casualties confirmed so far.

Commenting on the events, Speaker of the Iraqi Council of Representatives, Mohammed Al-Halbousi, said that the repeated strikes targeting the US embassy in central Baghdad are "unacceptable" and that they "do damage to Iraq's reputation, weaken the country and affect its sovereignty".

On 22 January, three missiles also hit the "green zone" in the Iraqi capital, no one was injured.

Tensions escalated in the region after Iran's top military commander Qasem Soleimani was killed in the US targeted attack on the International Airport in Baghdad. Following Soleimani's assassination, the Iraqi parliament voted to expel all coalition forces.

Back in late 2017, the Iraqi government declared victory over Daesh, which the country had been fighting for over three years. However, the international coalition, established against the terrorist group in 2014, has remained in Iraq in what it says is an effort to secure Iraq's borders and ensure a lasting victory over the terrorists.

US officials have repeatedly ruled out a complete pullback of American forces from Iraq. White House National Security Adviser Robert O'Brien has said the US would leave "on its own terms".
Share It :
Related Stories 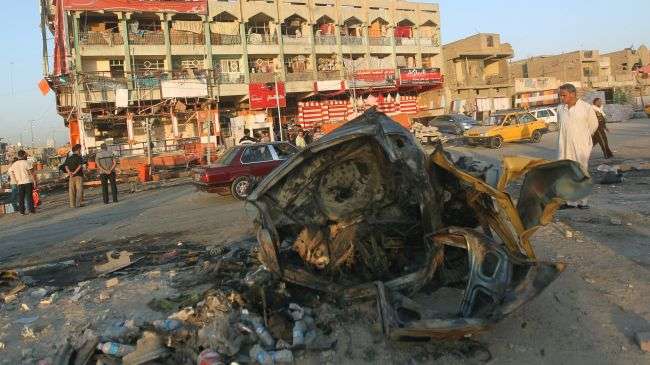 7 killed in car bomb attack in Baghdad’s Green Zone
Islam Times - At least seven people including military forces have been killed and dozens more wounded in a car bomb attack in the Iraqi capital, Baghdad's fortified Green Zone, officials ...
Comment
The United States Is in Syria Illegally as a Proxy for Israel and Saudi Arabia
Erdogan’s Treacherous Bluff
The Turkish Dreams and Schemes in Syria Have Collapsed
The Transnational Hezbollah Commander: Sayyed Abbas Mousawi
Russian Military Says that US Supply Militants in NE Syria with Weaponry Used Against Turkish Troops
US Attorney General 'Considers Resignation' over Trump Tweets
US on Verge of Signing Withdrawal Deal with Taliban, Sources Says
Why’s Mike in Africa? Pompeo’s not Visiting Senegal, Angola & Ethiopia for Fun – He’s There to Fight China
Saudi Regime to Execute Dozen Shiite Minor Dissidents
US Assassination of Iranian Commander against International Norms: UN Rapporteur
Demonstrations Held in Bahrain on Anniversary of February 14 Uprising