Story Code : 843214
Islam Times - Japanese Prime Minister Shinzo Abe said on Friday that he wanted to solve the dispute with Russia around the Southern Kuril Islands, known as the Northern Territories in Japan, boost friendly relations between Moscow and Tokyo as well as sign a peace treaty between the two nations.
“I would like to promote the joint work to find a mutually acceptable solution as well as move forward the talks step by step. I will firmly seek to solve the territorial dispute and sign the peace treaty. First of all, it is important to boost friendly and trust-based relations between the peoples of Japan and Russia so that the four islands will become the islands of friendship”, Abe said at the annual government-organized meeting devoted to the Northern Territories Day.

The Russian-Japanese relations have long been complicated by the fact that the two nations never signed a permanent peace treaty after the end of World War II. The deal was not reached because of a disagreement over a group of four islands — Iturup, Kunashir, Shikotan and Habomai — that are claimed by both countries. They are collectively referred to as the Southern Kurils by Russia and the Northern Territories by Japan.

Since Russian President Vladimir Putin's visit to Japan in December 2016, the relations between the two nations have been improving, with the two sides agreeing to develop joint projects on the disputed islands.
Share It :
Related Stories 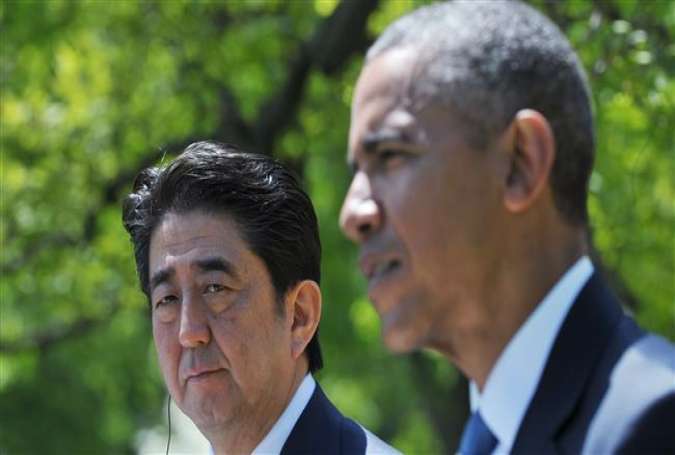 NSA spied on Japanese PM Shinzo Abe: Wikileaks
Islam Times - The whistleblowers at WikiLeaks have published a trove of documents that reveal a systematic mass surveillance program that the US National Security Agency (NSA) has been ...
Comment
Hezbollah Fully Rejects Everything that Leades to Division, Religious Tension
China to Strengthen Global Cooperation in Coronavirus Vaccine Trials
Trump and Dual Policy - Negotiation and Sanctions
Russia: US Should Leave Syria and Deal with its Internal Crisis
UK Protesters Clash with Police During Anti-Rasism Demonstrations
Number of Top Republicans Do Not Plan to Back Trump's Re-Election: Report
US Should Leave China Alone, Focus on Putting its Own House in Order
Palestine’s Islamic Jihad Mourns Former S.G. Ramadan Abdullah Shallah
US Arrests Now Higher Than Hong Kong Protest Total Figures
Many Articles of US-Iraq Strategic Agreement to be Amended according to Iraqi Politician
Treatment of Protesters Outside WH Dishonors Every Value Faith Teaches Us: Pelosi & Schumer
Protesters Cleared by Tear Gas and Rubber Bullets for Trump Photo Op