But Would Anyone Notice? CNN Breaks ‘Report’ of Syrian Airstrikes… from 2018

Story Code : 844805
Islam Times - CNN readers anxious to get updates on the Syrian war have been treated with a fresh report on the “regime’s atrocities” citing the usual suspects… or it would only seem so, as the network reran a two-year-old story instead.
Citing the UK-based and rebel-linked Syrian Observatory for Human Rights, the story claims that forces loyal to Syrian President Bashar Assad killed at least 71 people and injured 325 others in a series of airstrikes on rebel-held Eastern Ghouta. Published this week, the report is featured on CNN website’s ‘World’ and ‘Middle East’ sections. 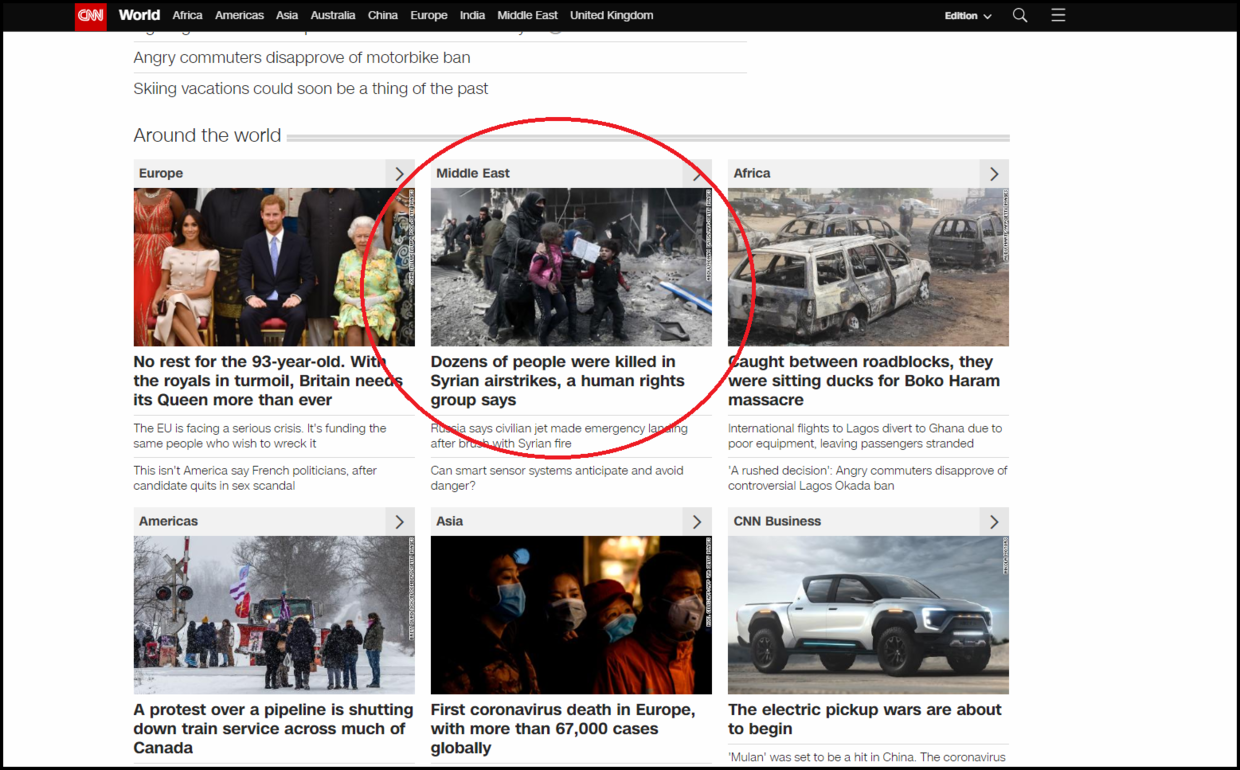 The only problem is that Ghouta has been under the control of Assad’s government for nearly two years. Homes in the region are being rebuilt, not leveled by bombs.

In fact, CNN ran the same story, word for word, back in February 2018. The same paragraphs detailing the horrendous bombing appeared, along with a handy get-out-clause: “CNN could not independently verify the claim.”

So why tell old news again? Did the network feel the need to remind its readers again which side they should take in Syria’s eight-year civil war? Did its editors slip in an old story under the radar to bulk up its weekend coverage?

No reasonable explanation for updating 2018 propaganda piece to current date. CNN may claim there was a minor edit resulting in the updated date, but if that were the case, as a "professional news org" (cough) they should remove the fake news article from their current fake news.

Whatever the reason, Saturday is often a slow news day, and clicks are clicks. After all, if it weren’t for the ad revenue generated by stories like this, CNN couldn’t send its reporters into the field to cover the stories that really matter, like when it revealed how President Trump eats “chicken with a fork.” Nor could it afford to pay its journalists to doxx pro-Trump meme makers and mock Trump supporters’ ‘yokel’ accents.

Perhaps CNN listened to its audience, one of whom complained on Sunday “how there’s still nothing about Syria on the CNN front page.” Perhaps in the rush to pump out Syria-related content for this one viewer, its editors figured anything was better than nothing.

Surreal how there's still nothing about Syria on the CNN front page. I mean, there's a great big fucking war that's either going to end in the most brutal way possible or escalate into an even bigger war.

— Starfish Who Should Be Told To Get Back To Work (@IRHotTakes) February 9, 2020

CNN is sometimes accused of peddling ‘fake news,’ but the real reason for the Syria rerun was probably less sinister. The article’s URL features the same 2018 date as the original, meaning some overworked editor likely pressed the wrong button in the website’s backend.

Though its publication was likely a slip of the mouse, the article conveniently bolstered the pro-rebel coverage of Syria’s venerable conflict.

“Sure, CNN will claim there was a minor edit,” journalist Eva Bartlett wrote on Facebook. “But as a ‘professional news organization,’ if that were the strange case, they should remove the fake news article from the rest of their current fake news.”
Source : RT
Share It :
Comment
Iranian Parliament Speaker Tests Positive for Coronavirus
Syria Seals Sayyed Zeinab Shrine to Stem Coronavirus
West Taking Advantage of Venezuela’s Coronavirus Outbreak to Topple Gov’t: Russia
Over 800 Indian Pilgrims Stranded in Iran to Go Back Home
Already Faced with Famine and War, Yemenis Fear Saudi Arabia is Weaponizing COVID-19
Virginia Goes Zionist
US Jobless Claims Surge to Record 6.6 Million amid Coronavirus Lockdown
If U.S. Makes Slightest Move against Iran, It Will Face the ‘Fiercest Response’: General Baqeri
Greece Seals Off Migrant Camp with Multiple Virus Cases
Yemeni Ansurullah Urges Saudi-Led Coalition to Consider Mediation Proposal
US Troops Leaving Iraqs Qayyarah Air Base as Attacks on American Forces Increase