US Hinders Political Solution to the Crisis in Syria: Zakharova

Story Code : 851455
Islam Times - Spokeswoman of the Russian Foreign Ministry, Maria Zakharova, said on Thursday that the US stirs provocations and seeks to hinder the political solution to the crisis in Syria.
“We have drawn the attention to the intensifying contacts between the American politicians and the so-called White Helmets terrorist organization… such contacts generally end with big problems in the region,” Zakharova said in a weekly press conference.

She added that on March 17th, US Deputy Secretary of State, Stephen Biegun, received leader of that terrorist organization though restrictions imposed by US State Department on contacts with foreigners in light of Coronavirus.

Zakharova affirmed that the so-called “White Helmets” occurs once again in the center of manipulation with information in the West to distort the situation in Idleb.
Share It :
Related Stories 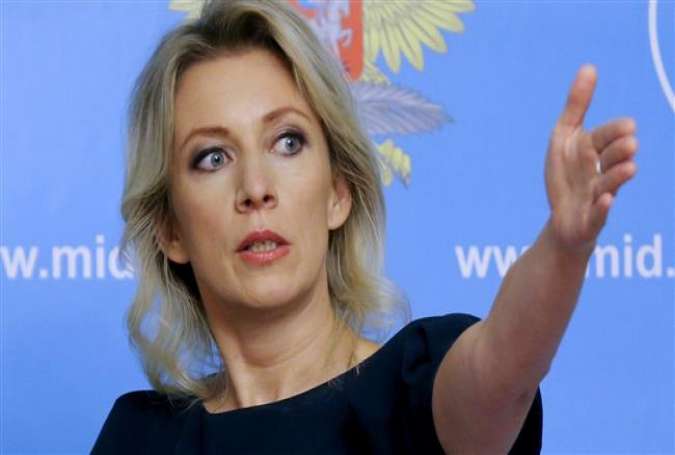 Samantha Power should be embarrassed: Russia’s Maria Zakharova
Islam Times - The Russian Foreign Ministry’s spokeswoman has asked the US envoy to the UN to take a trip to Syria to find out what “embarrassed” ...
Maria Zakharova: The Elimination of Militants in Syria is Primarily the Mission of the Syrian Army and the Auxiliary Forces
Maria Zakharova: European Sides Showed Inability to Guarantee Iran's Interests
Comment
General Flynn, QAnon and the US Elections
Iranian Nuclear Scientist Assassination: Objectives And Implications
Saudi Arabia Officially Allows All UAE-Israel Flights through Its Airspace
Turkey, Russia Seal Deal for Karabakh Peacekeeping Center
China Refuses to Apologize Over Gruesome Australia Soldier Post
Saudi War Has Killed Over 220,000 Yemeni People
French President’s Party Agrees to Modify ’Security’ Law After Mass Protests
Iraq’s PMU Forces Launch Anti-Daesh Operation in Diyala
Haaretz: ‘Israeli’ Government Set to Fall: How It Got There and What Happens Next
EU Reportedly Seeks to Side with US on Tech against China
Netanyahu in 2018: Remember This Name, Fakhrizadeh!

Ayatollah Khamenei Commands Holding Criminals of Martyr Fakhrizadeh’s Assassination Accountable, Vows Punishment
Will Bin Salman Do It and Execute the Two Saudi Princes?
NYT: Zionist Entity Behind Hit on Mohsen Fakhrizadeh
Mike Pompeo Was a Hostage. To Himself.
Yemeni Children as Young as Seven Being Recruited by Saudi Arabia to Kill or Be Killed
NYT: Senior ‘Israeli’ Official Brags About Scientist Fakhrizadeh’s Assassination: “World Should Thank Us”
Official: Aramco Hit by 100% Yemen-Made Missile
Yemen’s Badr-P Kills, Injures Saudi Officers, Soldiers in the Aggression’s Joint Operations Room in Marib
Trump Says FBI, Department of Justice Could Be ‘Involved’ in ‘Rigged US Election’
Featured Stories