Story Code : 861528
Islam Times - Australian officials say the government’s push for an inquiry into the origins of the new coronavirus outbreak should not be exploited by the United States amid a row with China, which has been accused by Washington of covering up initial data on the deadly viral pandemic and the coronavirus-leak at a Chinese laboratory.
Canberra called last month for an independent inquiry into the origins of the coronavirus, which apparently erupted in the Chinese city of Wuhan in December last year before growing into a global pandemic, and said the plea was “reasonable” and not targeted at any specific country.

The inquiry was launched at a time when US President Donald Trump claimed he had seen evidence linking the flu-like pathogen to a lab in Wuhan and threatened new trade tariffs on China. US Secretary of State Mike Pompeo also said there was “enormous evidence" backing the coronavirus-leak scenario.

The World Health Organization, senior US scientists and even the US intelligence community have rejected the claim despite pressure from the White House.

The Chinese foreign ministry has censured the calls for an inquiry as "political manipulation" and said Australia should "give up its ideological prejudices.”

Canberra — caught between a diplomatic row between the US and China — is both a major trading partner to Beijing and a military ally of Washington.

Sources close to the Australian government said Washington's attack on China has given Beijing room to argue that Australia's request for an independent inquiry is part of a US-led agenda to blame it for the coronavirus outbreak.

On Friday, Australian Prime Minister Scott Morrison reiterated his conviction that he has seen no evidence to support the theory the virus came from a medical lab, and that the most likely source was a wildlife market in Wuhan.

He also said the goal of the inquiry was to know how to prevent another outbreak.

"It's not directed at anyone, we just want to know what happened so it doesn't happen again," Morrison said, when asked whether the US focus on the Wuhan lab theory was counterproductive.

"It's a pretty honest question, with an honest intent and an honest motive. And I'm seeing more and more support for that position," he added, referring to Australia's goals.

The Australian premier wrote to G20 leaders this week to rally up support for an independent inquiry into the matter. The European Union is to raise the issue at the World Health Assembly in Geneva this month.

Australia has expressed optimism about China’s cooperation if there is wide international support for the independent investigation.

'Australia not a lapdog of US'

During an interview on ABC radio on Friday, Australia’s Trade Minister Simon Birmingham also responded to criticisms about whether an inquiry would hurt trade with China and underscored his country’s independence.

"We're not doing this as some sort of lapdog of the United States," he said. "You'll see there are some marked differences between some of the things that the Australian Government has said and some of the commentary coming out of the United States and that's because we take our own analysis, our own evidence, our own advice and we will take this issue through to the World Health Assembly."

In February, China’s Wuhan Institute of Virology dismissed rumors that the virus may have been artificially synthesized at one of its laboratories or perhaps escaped from such a facility.

In a related development on Friday, China announced that it supports the establishment of a panel led by the World Health Organization (WHO) to review the global response to the coronavirus pandemic.

Chinese Foreign Ministry spokeswoman Hua Chunying said at a news briefing in Beijing that the review should be conducted in an "open, transparent and inclusive manner" under the leadership of WHO chief Tedros Adhanom Ghebreyesus.

But she added that it should be at an "appropriate time after the pandemic is over.”

China also stressed that any inquiry should be based on the International Health Regulations, and be authorized by the World Health Assembly or Executive Committee — the WHO's dual governing bodies.

Meanwhile, China’s ambassador to Germany has also said that the country is open to an independent investigation to determine the origins of the coronavirus.

Trump has described the coronavirus pandemic as the worst attack ever on his country while pointing the finger at China, saying the outbreak has hit the United States harder than the Japanese bombing of Pearl Harbor during WW ll or the 9/11 attacks two decades ago, which led the country to wage two deadly wars against Iraq and Afghanistan.

Accusing Washington of "politicizing the issue", China believes that the US president is trying to divert attention from his poor handling of the coronavirus outbreak in his country in order to back up his presidential bid.

Trump's re-election aspiration comes as his attempts to reopen his country’s crisis-ridden economy faces opposition from health officials and many state governors while the coronavirus fatalities in the US continue to soar.

US Democrats have criticized Trump since the epidemic erupted in Wuhan late last year, saying he has failed to develop a comprehensive and effective plan for testing Americans for the coronavirus and tracing contacts of those who are infected by the virus, which has so far infected almost four million people and killed over 271,000 across the world.

More than 3.8 million laid-off workers applied for unemployment benefits last week as the US economy slid further into a crisis that is becoming the most devastating since the 1930s.

The economists have forecast that the unemployment rate for April could go as high as 20% — the highest rate since it reached 25% during the Great Depression. 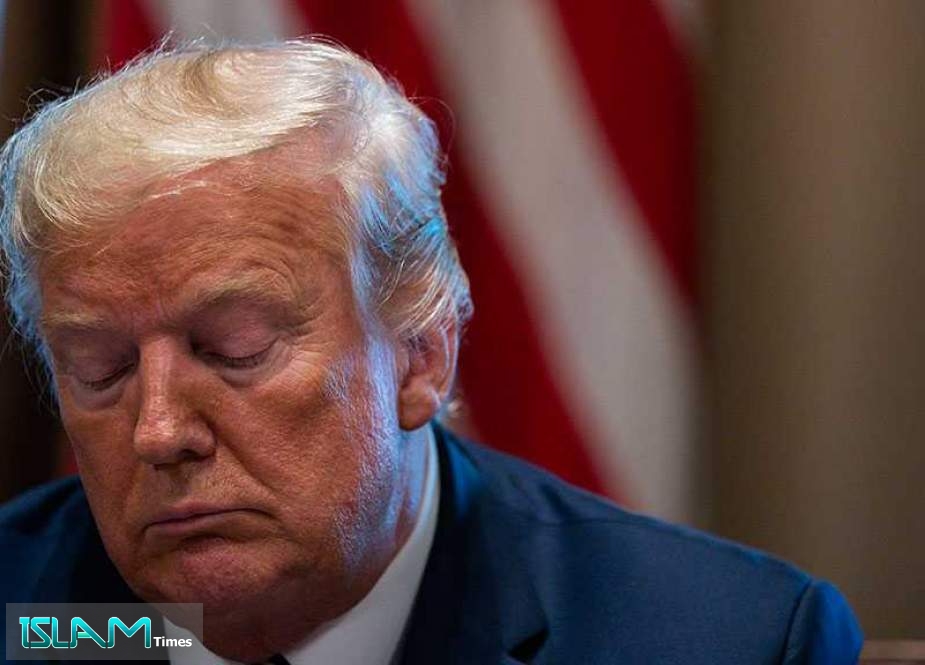