Story Code : 862880
Islam Times - A number of captured members of the Daesh Takfiri terrorist group have confessed to close cooperation with US military forces stationed at al-Tanf base in the central Syrian province of Homs to carry out various acts of terror and sabotage.
During confessions broadcast on Syria’s state-run television network on Thursday night, three extremists – identified as Salah Jaber al-Zaher, Ali Salim Yahya and Amer Abd al-Ghafar Nemah but better known by the noms de guerre Abu Abd al-Rahman al-Salafi, Abu al-Bara’a al-Homsi and Abu Sawan, revealed that they were instructed by American forces to target Syrian government troops in and around the ancient city of Palmyra, the Tiyas Military Airbase – also known as the T-4 Airbase, the Shaer gas field as well as nearby oil wells, Syria’s official news agency SANA reported.

“Once a close aid to our commander Hassan Alqam al-Jazrawi came to me and said he was in contact with the Americans at al-Tanf base. The man, whose name was Hassan al-Wali, added it was necessary to target Palmyra and T4 Airbase, and that US forces would provide us with rocket launchers and machine guns, besides financial support, cars and whatever we needed.

“He added that Americans would also launch reconnaissance aircraft to monitor the movements of Syrian army soldiers in Palmyra region, and inform us of their activities,” one of the terrorists said.

The militants, who were recently arrested during a security operation in the Syrian Desert, later pointed to the existence of coordination between their commanders and those of the so-called Revolutionary Commando Army.

Elsewhere in their confessions, the Takfiris touched down upon negotiations between their leaders and senior officials with the US-sponsored and Kurdish-led Syrian Democratic Forces (SDF).

One of the terrorists said there were such talks between the two sides once in Raqqah, the former de facto capital of Daesh.

“There was coordination for any operation we carried out. With the knowledge of Americans, we moved from Raqqa to Dayr al-Zawr. We had the protection of three Cougar (infantry mobility) vehicles and two Hummers, which were belonging to US forces and accompanying us. Helicopter gunships also flew overhead all the way to Dayr al-Zawr,” he said.

On the sources of financial and logistical support, the terrorists explained that their masters coordinated the matters monthly through the al-Tanf base.

“They used to go to the base every month, and bring some three shipments of food, ammunition and weapons, most of which were US-made… We used to obtain all our supplies from the base. Anytime one of us was injured, we would take him there for treatment. Al-Tanf base was a refuge for us. We would go there every time the Syrian army besieged a region, waiting there for several weeks and receiving food as well as first aid,” the captured Daesh members said.

The US trains anti-Damascus militants at the al-Tanf base, which is situated near Syria's borders with Iraq and Jordan.

Washington has unilaterally declared a 55-kilometer “de-confliction zone” around the facility, and frequently threatened to target Syrian forces within the area.
Source : SANA
Share It :
Related Stories 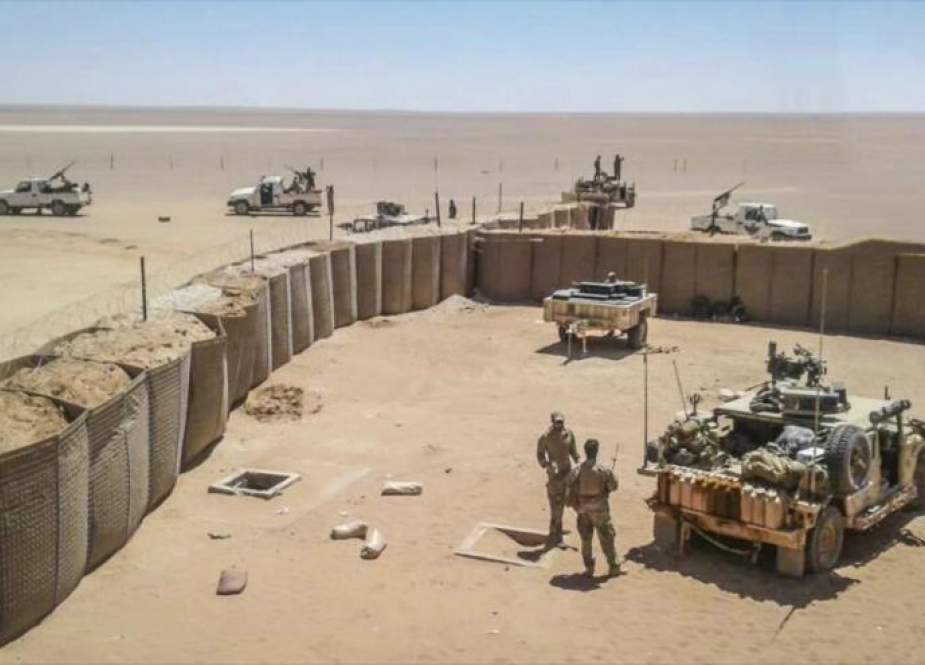 Syrian government forces besiege US base in al-Tanf
Islam Times - Syrian government forces have reportedly encircled a US military base at the al-Tanf border crossing with Jordan, after recapturing large parts of the Badiya region from ...
US-Led Coalition Attacks Syrian Forces Near Al-Tanf Border Area
US plans to keep troops in Syria's al-Tanf base
British jets bombed Syrian forces in Tanf last month
US Attacks on Syrian Forces in Al-Tanf a Blatant International Law Breach
Comment
US Considers Deploying Troops to Tunisia amid ‘Russian Threat’ in North Africa
Fifth Iranian Oil Tanker Enters Venezuelan Waters Sunday
American Protesters Circle White House amid Civil Unrest in US
Roadside Bomb Hits Minibus in Somali Capital, Kills Six
Russia Delivers Advanced MiG-29 Fighter Jets to Syria
Al-Aqsa Mosque Reopens after Two Months of Coronavirus Closure
If You're Dark-Skinned Walking in the US, You Can't Be Sure You'll Be Alive in the Next Few Minutes
Protests across America after Minneapolis Police Killing