"And in any case Washington started to raise the issue of arms embargo at the end of 2019. So months, not years," he added. 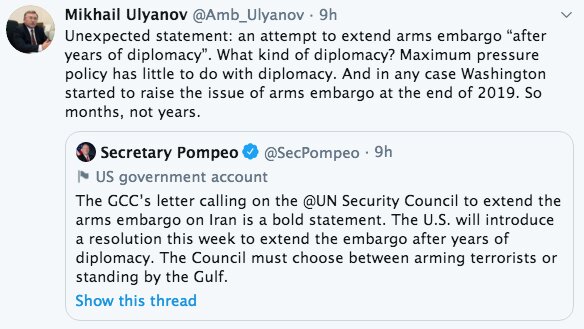 His tweet came as US Secretary of State Mike Pompeo in his Twitter account praised the Secretary-General of the Persian Gulf Cooperation Council for his anti-Iranian letter to the UN Security Council.

"The GCC’s letter calling on the @UN Security Council to extend the arms embargo on Iran is a bold statement. The US will introduce a resolution this week to extend the embargo after years of diplomacy. The Council must choose between arming terrorists or standing by the Gulf," Pompeo wrote on early Monday.

In a letter to the UN Security Council, Nayef Falah Mubarak Al-Hajraf, Secretary-General of the Persian Gulf Cooperation Council, has accused the Islamic Republic of supporting terrorism and sectarian organizations.

China and Russia have clearly announced that they will veto such a resolution, however, Foreign Policy has reported that Washington may even fail to attract the required 9 votes to pass the resolution in the first place.

The United States has started efforts to extend the embargo as a continuation of its anti-Iranian measures. Washington has also threatened that it might use the ‘snapback’ mechanism of the JCPOA if the UNSC rejects the resolution. This is while Washington has ‘ceased participation’ in the deal and, legally speaking, it is not able to trigger the mechanism.
Share It :
Related Stories 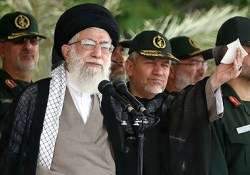