Story Code : 887308
Islam Times - The US occupation in Syria has sent a new convoy of military vehicles and troops to the oil-rich eastern side of the country amid rising tensions with Russian forces in the region, and as Washington seeks to loot the war-torn country’s crude resources.
Captain Bill Urban, spokesman for the US Central Command [CENTCOM], said in a statement on Friday that the United States “has deployed Sentinel radar, increased the frequency of US fighter patrols over US forces, and deployed Bradley Fighting Vehicles to augment US forces” in the area.

Without mentioning Russia, Urban added that the moves were meant “to help ensure the safety and security” of the US-led military coalition purportedly formed to fight Daesh [the Arabic acronym for Takfiri terrorist ‘ISIS/ISIL’ group].

He claimed that the US “does not seek conflict with any other nation in Syria, but will defend coalition forces if necessary.”

A US official, speaking on condition of anonymity, also said six Bradley Fighting Vehicles arrived in Syria early on Friday from Kuwait, and that their deployment along with the forces manning the radar equipment will add an additional 100 personnel to the 500 American forces operating in eastern Syria.

The official went on to say that the actions are “a clear signal to Russia and other parties” to avoid what he termed as “unprofessional, unsafe and provocative actions in northeast Syria.”

Senior US officials have on occasions complained about Washington’s policies in Syria, arguing that the approaches of US President Donald Trump’s administration have stuck American troops fighting a 'forgotten war' and guarding oil and gas resources there, while Russian troops are making advances and help the Damascus government recover after nearly a decade of militancy.

One top US intelligence official, who requested anonymity, told American weekly news magazine Newsweek earlier this month: “We don't have a strategy.”

Malcolm Nance, a former US Navy intelligence and counter-terrorism specialist, also compared the situation to another bloody quagmire for the Pentagon, and said the presence of US troops on the Syrian soil is a political game with little payoff.

Moreover, Russian and Syrian joint coordination committees on the repatriation of Syrian refugees have denounced the presence of US troops on the Syrian soil, stating that such an illegal military deployment stokes new tensions in the Middle East.

The committees, in a statement released on September 3, cited the unlawful presence of US forces and militants affiliated with the so-called Syrian Democratic Forces [SDF] as one of the serious matters of concern in northeastern Syria, state-run official news agency SANA reported at the time.
Share It :
Related Stories 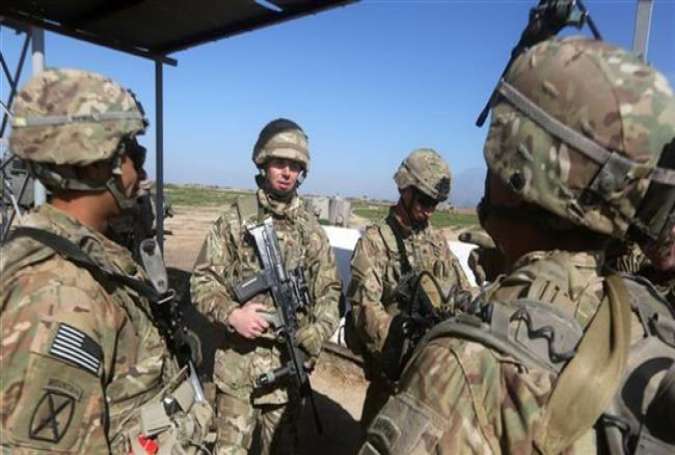 US deploys more troops on the ground in Iraq
Islam Times - More US Marines have been deployed on the ground in Iraq purportedly to support the Baghdad government in its fight against the Takfiri Daesh terrorist group.
Comment
US Court Sends Subpoena to MBS on Assassination Charges
Evo Morales Sets Date for Returning to Bolivia
US Moves Forward with Sale Of 50 F-35 Jets To UAE
Armenia Hails Iran’s Role in Regional Peace
Poll: Half of Trump Supporters Say He Shouldn’t Accept Election Result If He Loses
“Israel” Jails Palestinian Teenager for Three Years
President Assad Discusses with Russian Delegation Int’l Refugees Conference Scheduled in Damascus
Russian Blitz in Syria Warns Turkey to Back Off in Caucasus
One ‘NO’ Instead of Three! Sudanese Against Normalization
The End of American Power: Don’t Blame Trump, and Don’t Expect Biden to Save It Either
Time to Flee? Bolivia: Áñez Asks US For 350 Visas After Arce's victory
Macron Opens Floodgates for Muslim Backlash as He Insists on Insults
Hezbollah Slams Political, Ethical Collapse of Sudan Regime into the Swamp of Normalization, Betrayal
Hezbollah Slams France’s Deliberate Transgression against Prophet Mohammad [PBUH], Rejects Its Official Stance
‘Rigged Election?’ Trump Seizes on Biden's Latest Gaffe, Boasting About 'Most Extensive, Inclusive VOTER FRAUD' Organization
Kashmiris Decry ‘Land Grab’ as India Enacts New Laws
Israeli Military Launches Drills Simulating War against Lebanon’s Hezbollah
Russia’s Man ‘Who Saved World’
As U.S. Tensions Soar With China, Taiwan Fears Cannon Fodder Risk
Why Conflict in Caucasus Is Erdogan’s Revenge for Syria
Featured Stories