Iraqi Hezbollah Brigades: All Weapons Must Be Pointed at US Positions

Story Code : 892008
Islam Times - Amid threats of a US war against Iraq’s anti-terrorism resistance groups, a prominent faction of Iraq’s Popular Mobilization Units —known in Arabic as Hash al-Shaabi —reiterated its readiness to end the US military presence in the Arab country, saying all weapons should be pointed at American positions on Iraqi soil.
In a statement on Tuesday, Abu Ali al-Askari, a senior Iraqi Hezbollah Brigades [Kataib Hezbollah] commander, said that the resistance group was prepared to keep up armed resistance to the continued US military presence in Iraq.

The statement called on the resistance forces to continue to identify, deploy to, and take aim directly and indirectly at the interests of the enemy and its bases and military equipment, whether on the ground or in violation of Iraqi airspace.

Askari asked the Iraqi forces to be in a state of maximum readiness so that nothing will be left of the enemy, if the need arises, and the only thing that could save them will be political movements leading to a timetable for the withdrawal of American troops from Iraq.

The Iraqi resistance commander further urged the resistance fighters to keep an eye on ‘Israeli’ delegations that constantly visit some US bases in Iraq.

He said that the resistance group should prepare daily reports to inform the Iraqi people about the ‘Israeli’-American intrusions of Iraqi airspace.

Weekly reports should also be prepared to reveal the sabotage activities of the American enemy and its spy services and to disclose the true number of US troops, their weapons and movements, he added.

Askari pointed to an earlier statement by Iraqi resistance groups, which announced a halt to military operations against US and foreign forces in Iraq to allow them to leave the Arab country, emphasizing that the “conditional opportunity” given to the enemy would end undeniably.

In a joint statement on Saturday, Iraqi resistance groups agreed on a conditional ceasefire to American forces present in Iraq, saying they would halt their military operations against the US troops, including rocket attacks, providing that Washington does not persist in maintaining their presence in the Arab country.

Hezbollah Brigades is an anti-US unit operating under the PMU, which includes more than 40 militia groups fighting Takfiri terrorism.
Share It :
Tagged
Iraq US
Related Stories 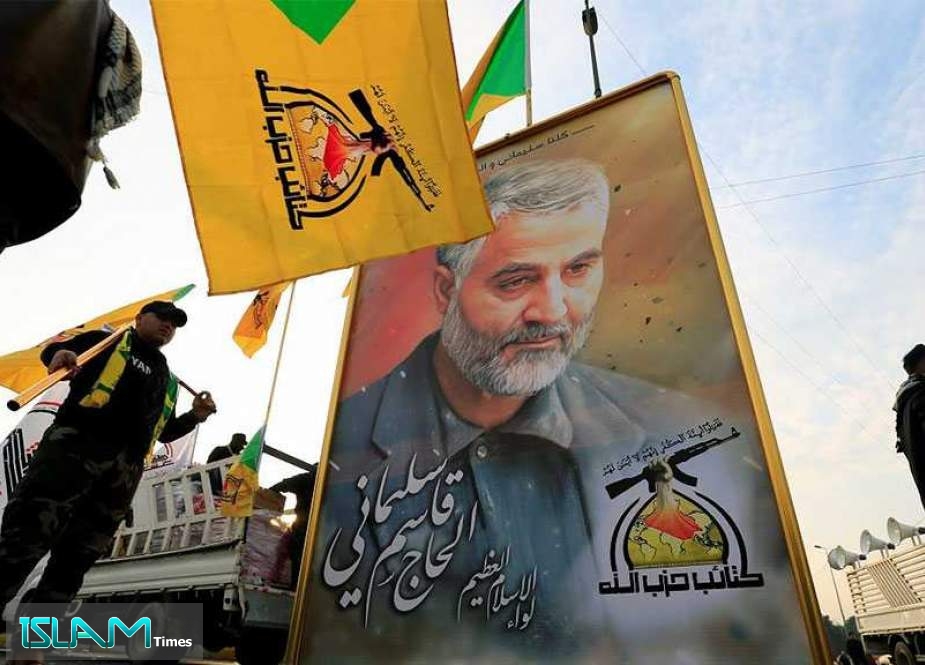 Iraqi Hezbollah Brigades Vow To Drive US Troops Out Of Country
Islam Times - A security official for Iraq’s Kataib [Brigades] Hezbollah resistance group reiterated the group’s readiness to end the US military ...
Iraqi Hezbollah Brigades Strike ISIL in Salahuddin
Comment
US Special Envoy for Afghanistan Travels to Kabul and Qatar
China Tells UN Come to Xinjiang, But Not for ‘Investigation Based on Guilty Before Proven'
Lavrov: Russia to Definitely Respond to Any Sanctions Imposed by US
Iran: US Diplomacy Claims ‘Hypocritical Rhetoric’
Yemen to Target Saudi Aramco If ‘Safer’ Oilfield Attacked
US to Consider Arms Sales to Saudi Arabia on Case-by-case Basis
All 297 Schoolgirls Kidnapped In Nigeria Are Free
Just like Every Other Battle, ‘Israel’ Fails to Address Pandemic, Poverty
German Court Files Criminal Complaint against MBS
Ansarullah Releases Footage of Ballistic Missile at Targets in Saudi Capital