Story Code : 894015
Islam Times - Palestinian resistance groups based in the Israeli-besieged Gaza Strip have blasted French President Emmanuel Macron for defending offensive cartoons of Islam’s Prophet Mohammad (PBUH).
In a statement released, Hamas said, “Insulting religions and prophets is not a matter of freedom of expression, but rather promotes a culture of hatred”, warning of unspecified “consequences”, presstv reported.

"Macron's encouragement to publish insulting cartoons of the Prophet (PBUH) is an attempt to revive the Crusades which France was the source of its trigger," said Sami Abu Zuhri, a senior Hamas spokesman.

For its part, the Islamic Jihad stressed that "offending" Islam, and Prophet Mohammad (PBUH) is a "red line" that "could not be tolerated".

The condemnations came three days after Macron claimed that a French teacher beheaded earlier this month "was killed because Islamists want our future".

The history teacher, Samuel Paty, had provoked outrage by showing to his students the blasphemous cartoons of Prophet Mohammad (PBUH), published by the French satirical newspaper Charlie Hebdo.

He was murdered outside his school in a Paris suburb on October 16 by an 18-year-old assailant, identified as Chechen Abdullakh Anzorov, who was shot dead by police soon after the killing.

In a tribute to the slain teacher, the French president described him as a “quiet hero” and posthumously awarded him the Légion d'Honneur, the country’s highest civilian honor.

Macron also vowed his country would not "give up cartoons" depicting Prophet Mohammad (PBUH), claiming that Paty was killed by "cowards" for representing the secular, democratic values of the French Republic.

Since then, calls have been growing for a boycott of French products in the Arab world and beyond.

On Saturday night, hundreds of Arabs in Israel gathered outside the residence of French Ambassador Eric Danon in Tel Aviv’s Jaffa district to voice their anger at Macron’s comments.

The protest began after Muslim evening prayers, with the participants holding up banners written in Arabic in support of Prophet Mohammad (PBUH).

One of the demonstrators, Amin Bukhari, accused Macron of playing the game of “the extreme right”.

Also in the Southern Gaza city of Khan Yunis, Palestinian protesters burned photos of Macron and called for the defense of both the prophet and Islam, Le Figaro reported. 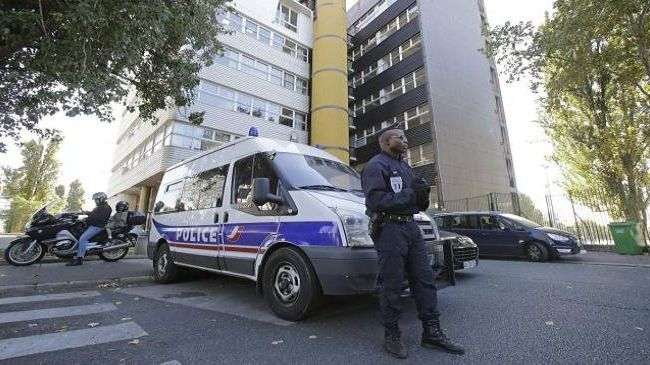