The court had sent a subpoena to Mohamed bin Salman on WhatsApp and he has seen it 20 minutes after the message was sent.

CNN Network has managed to receive a picture of the conversation page and a subpoena sent to Muhammad bin Salman, which shows that he has seen the message. 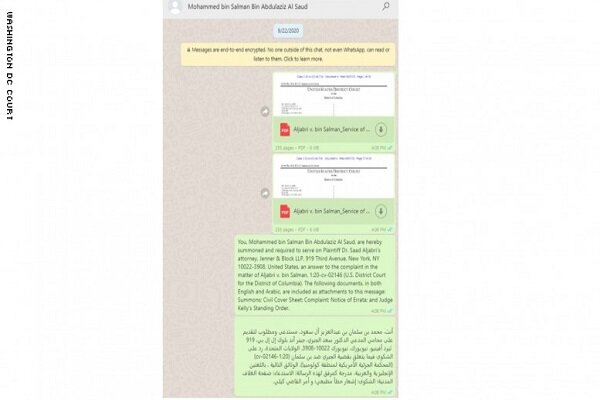 The report also said that a US court had charged nine other people, including Badr al-Assaker, Head of Saudi Crown Prince's Office, Saud al-Qahtani, his adviser, and Ahmad Asiri, a former deputy head of the Saudi Intelligence Service, with plotting to assassinate Saad al-Jabri

On August 1, Saad al-Jabri, bin Salman's former security adviser, appeared in a US court in Washington to sue the Saudi Crown Prince for plotting to assassinate him. Al-Jabri's petition states that in 2018, the Saudi Crown Prince sent a terrorist team to the United States and then Canada to assassinate and dismember his body like Saudi Arabian journalist Jamal Khashoggi.

Earlier, Zaid Benjamin, a journalist and media activist, tweeted that Saudi Crown Prince Mohammed bin Salman had appealed to a number of US lawyers to defend himself in a federal court in Washington over Al-Jabri assassination case.
Share It :
Comment
Bolsonaro Says Has Own Sources of Info That There Was 'A Lot of Fraud' During US Election
President Aoun May Never Accept Hariri’s De Facto Government Line-up
Turkish Exploration Vessel Back in Port Ahead of EU Summit
Biden's Win Threatens Macron’s Project of More Independence
JCPOA Joint Commission to Meet in Vienna on December 16
Armenia Seeks Putin's Help for Return of Servicemen Held by Baku
Beijing Slams US Plans to Blacklist Two Chinese Firms over Alleged Ties to Military
Next Round of Lebanese Maritime Border Talks Postponed
Rights Group: Scores of Sick Palestinians Facing Death in “Israeli” Prisons
WHO Warns That Malaria Death Toll To Exceed COVID-19’s In Sub-Saharan Africa
Netanyahu in 2018: Remember This Name, Fakhrizadeh!