Story Code : 898893
Islam Times - A Palestinian human rights group says “Israeli” Occupation Forces [IOF] have arrested more than 400 Palestinians under the age of 18 since the start of the current year, as the regime continues to target young Palestinians across the occupied territories.
The Palestinian Prisoners' Society [PPS], in a statement released on the occasion of World Children's Day, which is celebrated on November 20 each year, announced that approximately 170 Palestinian children are currently languishing behind bars in the three “Israeli”-run detention centers of Megiddo, Ofer and Damon.

It added that the IOF relentlessly continue their arrest campaign against Palestinian children despite the COVID-19 pandemic. Palestinian minors held in “Israeli” prisons are denied access to lawyers and family visits as well.

The PPS then pointed to a number of violations that the IOF carry out against Palestinian child prisoners, namely abduction from their homes in the middle of the night, hours-long detention without food or drink, verbal abuse, threats of torture to force confessions, interrogation without the presence of a parent or a lawyer and deprivation of education.

More than 7,000 Palestinian children have been detained by “Israeli” authorities since 2015, and some have been sentenced to ten years in prison or life imprisonment, the society highlighted, noting that most of the child detainees are from occupied al-Quds [Jerusalem].

The PPS finally called on international human rights institutions, and the United Nations Children's Fund [UNICEF] in particular, to make serious efforts to protect Palestinian children, and to oblige “Israeli” authorities to abide by a series of agreements concerning protection of child detainees.

More than 7,000 Palestinian prisoners are currently held in some 17 “Israeli” jails, with dozens of them serving multiple life sentences.
Share It :
Related Stories 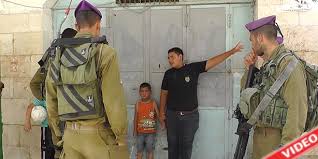