Story Code : 899791
Islam Times - China’s embassy in the Philippines denounced the United States for “creating chaos” in Asia, after a visiting White House envoy backed countries in disputes with China and accused Beijing of using military pressure to further its interests.
During a trip to Manila on Monday, national security adviser Robert O’Brien underscored the US commitment to Taiwan and told the Philippines and Vietnam, countries both locked in maritime rows with China, that “we’ve got your back”.

“It shows that his visit to this region is not to promote regional peace and stability, but to create chaos in the region in order to seek selfish interests of the US,” the embassy said in a statement issued late Monday.

The United States should “stop inciting confrontation” in the South China Sea and “stop making irresponsible remarks on the Taiwan and Hong Kong issue, which are purely China’s internal affairs”, the statement said, Reuters reported.

O’Brien has warned China it would face a “backlash” if it attempted to use military force to coerce Taiwan, which China views as one of its provinces with no right to state-to-state ties.

The United States and China have been at loggerheads over issues from technology and human rights to Chinese maritime militarization, with each accusing the other of deliberately provocative behavior.

China claim to 90% of the South China Sea includes areas claimed by Brunei, Malaysia, the Philippines, Taiwan and Vietnam. An international tribunal in 2016 ruled that China’s expansive claim, based on its historical maps, is inconsistent with international law.

The United States has repeatedly sent warships to the strategic waterway to demonstrate freedom of navigation there.

“Facts have proved that the US is the biggest driver of the militarization,” the embassy statement said, calling it “the most dangerous external factor” in the South China Sea.

The United States embassy in Manila had no immediate response.
Share It :
Related Stories 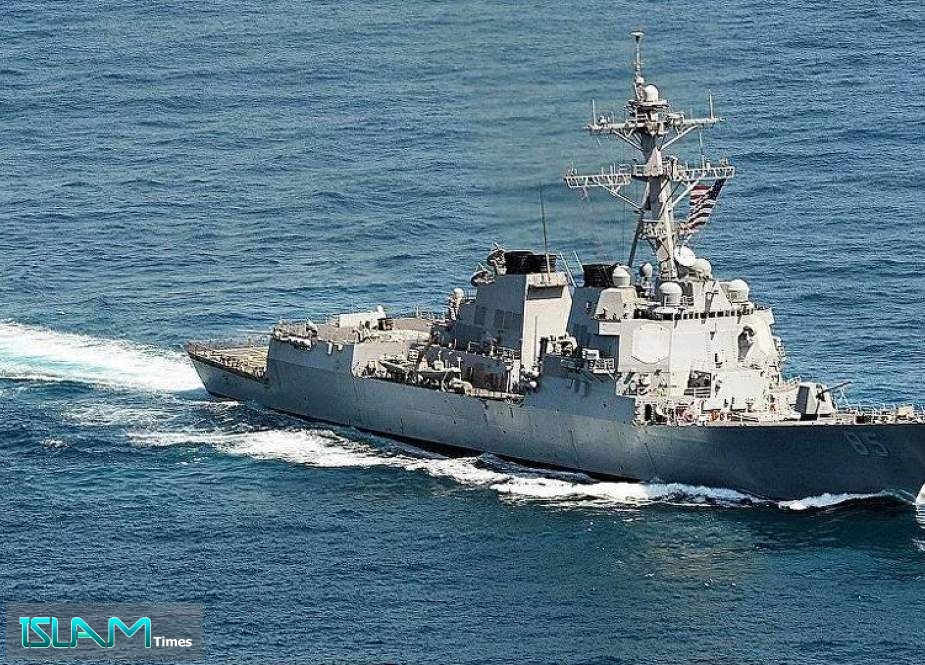 China Slams US ‘Extremely Dangerous' Move in Taiwan Strait
Islam Times - China condemned the US “extremely dangerous” move to sale a warship through the Taiwan Strait.
China: The Rumors about Corona is More Dangerous Than the Virus Itself
China’s Defense Minister Warns US over ‘Dangerous Moves’
US-China’s Dangerous Contest for Asia-Pacific
Pompeo Congratulating Taiwan President Is Very Dangerous: China
Lebanon Starts Clearance of Dangerous Port Containers Months After the Deadly Explosion
Saudi, Turkey, Qatar behind dangerous escalation: Syria
EU: Nimr execution may have dangerous consequences for Mideast
Comment
US and Zionist Regime are Behind the Denial of Justice that is Being Done to Sheikh Zakzaki and the Islamic Movement
Sheikh Zakzaki Speaks against Every Injustice That is Done by Anyone against Humanity
UC Merced Professor Laid Off for Posting Anti-’Israel’ Tweets
Biden Will Recognize Guaido as Venezuela’s Leader
‘Israeli’ Warplanes Bomb Gaza
Qatar Suspends WTO Dispute with UAE As Gulf Conflict Thaws
“Israeli” Navy Prepares for Confrontation against Hezbollah, Hamas
Yemen’s Ansarullah: Blacklisting Won’t Affect Our Stance, We’ll Not Compromise
Biden To Be Sworn in as 46th US President, Ending Trump Era
Iran Blocks Saudi, UAE From Joining UN Disarmament Talks
Russia: Iran Pioneer in Fight against Terrorism
‘As If It Was Baghdad’: US Secret Service Creates Fortified ‘Capitol Green Zone’ Ahead of Inauguration
Is “Israel” Ignoring the Biggest Strategic Threat It Faces?
Trump Confidante Seen at White House With Notes Appearing to Call for ‘Martial Law’
My Uncle ‘Enjoyed Every Second’ of Capitol Riot: Mary Trump
US Withdraws Last Troops from Somalia
Hamas: US Decision to Include ‘Israel’ in CENTCOM “Fruit of Recent Normalization Deals”
Pompeo Accused Iran to Gain Zionists Support in 2024 Election: Pakistani PM
‘Hezbollah Boosted Missile Power as Israel Intensified Aggression in Syria’
Two Female Supreme Court Judges Assassinated in Kabul
Featured Stories