Story Code : 908824
Islam Times - Following US incumbent President Donald Trump's controversial measures inside the US, Iran's top diplomat Zarif has expressed concern over Trump's 'unchecked' authority over nuclear bombs.
In a tweet on Thu., Mohammad Javad Zarif wrote, “A rogue president who sought vengeance against his OWN people has been doing much worse to our people—and others—in the past 4 years.”

“What's disturbing is that the same man has the UNCHECKED authority to start a nuclear war; a security concern for the entire international community,” he reiterated.

Earlier in the day, Trump protesters stormed the US Capitol building, destroying property and seizing the rotunda room, as Congress was trying to certify the results of Democrat Joe Biden's presidential victory.

Many senators and representatives have blamed Trump for inciting violence after the election and particularly in last night's incidents. 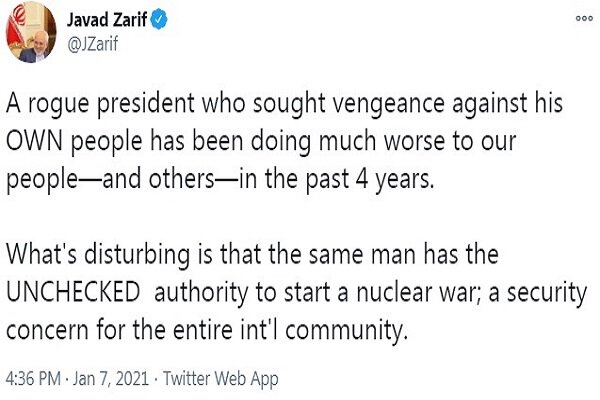