Story Code : 917561
Islam Times - The intention of Western countries to resolve global issues within a private circle without inviting Russia and China is baffling, Spokeswoman for the Russian Foreign Ministry, Maria Zakharova noted in a statement Saturday following a special online session of the Munich Security Conference held on Friday.
"Considering that the announced agenda had such global items as ‘Priorities for Global Action,’ ‘Fighting the Pandemic’ and ‘Tackling the Climate Crisis,’ the list of participants is at the very least puzzling," she underlined, TASS reported.

"Essentially, the problems faced by the whole humanity are planned to be discussed in a very narrowed format. The organizers invited the US and EU leadership as well as the UN secretary general and the WHO director general to join the discussion. There was no mention of inviting other countries, including Russia and China. On the contrary, they were viewed by the discussions as threats and opponents who need to be countered," Zakharova said.

"We once again are forced to note the trend of the past few years when our Western partners seek to resolve issues in a narrow circle and advance decisions that they are comfortable with, which will later be imposed on other members of the international community through the prism of the ‘rule-based world order’," she added.

Zakharova emphasized that Russia does not share this approach and urges broader international cooperation on a common agenda in the framework of the universal democratic agencies of the UN.
Share It :
Related Stories 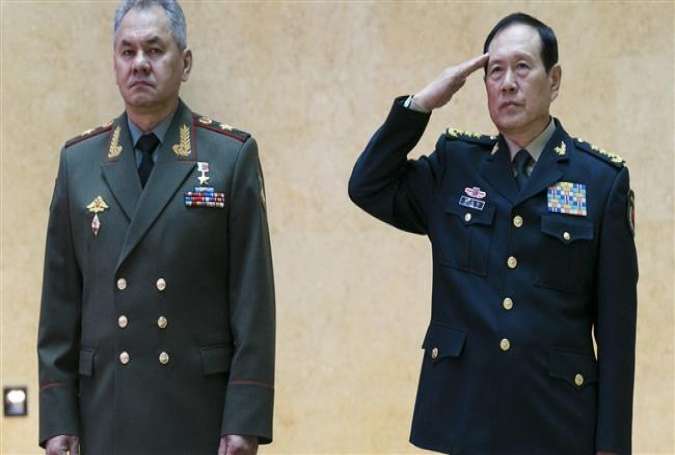 China: Our presence in Moscow show of unity with Russia
Islam Times - China has said that it sent a military delegation to Russia in order to show the US the unity between Moscow and Beijing's military forces.
US Health Chief Arrives in Taiwan on Trip Condemned by China
Four Killed & 23 Injured after Earthquake in Southwest China
Record Number Vote in Hong Kong in Test of Support for China-Backed Leader
The conclusion of the joint military exercises between China and Australia
INSTEX shows EU's resolve to uphold Iran nuclear deal: China
US committing crimes by building military bases around China
US Senate minority leader backs Trump’s trade war on China
Comment
Yemen Slams Biased UN, International Stances on Ma’rib Battle
Defense Minister Unveils Iranian Rifles, Shotguns
2 Bombs Blast in Baghdad
Israeli Protesters Attacked in 37th Consecutive Week of Anti-Netanyahu Demos
FM Says Venezuela to Continue Moving Forward Regardless of US Sanctions
Pope & Sistani Meeting NO to Normalizing with Israeli Regime
China Says Hopes US Will Remove 'Unreasonable' Restrictions on Cooperation
Zionist Rhetoric of Threats against Iran Springs from Desperation: Defense Minister
President Rouhani: Activation of JCPOA Subject to Lifting of Sanctions by US
Yemeni Forces Closing in on Ma’rib in Key Battle against Saudi-led Militants
All 297 Schoolgirls Kidnapped In Nigeria Are Free
US Capitol on High Alert with Almost 5,000 National Guard Troops on Streets
Pentagon Assessing Systems after Tens of Thousands of US Orgs Hacked
German Court Files Criminal Complaint against MBS
Yemeni Missile Hits Saudi Aramco Oil Facility: Spokesman
India Threatens to Jail Facebook, Whatsapp & Twitter Staff
Hezbollah “Will Make Israel See Stars” in Case of Any Attack on Lebanon: Sheikh Qassem
Iraqi MP Calls Attack on US Base near Erbil "Fabricated"
Ansarullah Releases Footage of Ballistic Missile at Targets in Saudi Capital