Story Code : 917836
Islam Times - Supreme Leader of the Islamic Revolution Imam Sayyed Ali Khamenei on Monday stated that “Iran is not pursuing the production of nuclear weapons. Of course, Iran will not stay limited to an enrichment of 20%. And there is the possibility of increasing enrichment up to 60% in accordance with the country’s needs.”
Ayatollah Khamenei made the remarks when receiving participants of the 8th summit of the 5th round of the Assembly of Experts which was held on Monday.

The Islamic Republic will not step back from its logical positions on the nuclear issue and Iran will increase uranium enrichment to 60% if needed, the Supreme Leader underlined.

He reiterated that the Islamic Republic will not retreat from its rational stance on the nuclear issue and will pursue enriching uranium to the extent that is required for the interest of the country even up to 60 percent enrichment.

Commenting on the strategic law of sanctions removal passed by Majlis, Ayatollah Khamenei pointed out that the law should be carefully followed as it is “good”.

He advised the the Iranian lawmakers (parliamentarians) and the government to cooperate in unison.

The result of this will be nothing but being obnoxious, Supreme Leader further noted.

Pointing to a recent law ratified by the Iranian parliament obliging the administration of President Hassan Rouhani to scale back some its commitments under the Joint Comprehensive Plan of Action (JCPOA), the Supreme Leader asserted that the parliament ratified a law and the administration welcomed; they carried out some works that should be done until yesterday and hopefully, another part of the law will be implemented tomorrow.

He further referred to interpretation of the parliament from the way the administration is doing his job in this respect, noting that such differences can be resolved and the two sides should cooperate and avoid escaping or escalating such differences, which could be interpreted as divide in the country.

The administration considers itself obliged to implement laws and the legislature which is a good law should be implemented carefully, the Leader of the Islamic Revolution emphasized.

He also described recent comments made by the US and three European states on Iran as arrogant, bullying and unfair.

The rhetoric made by the US and three European countries on Iran’s scaling back of its obligations concerning the nuclear deal is wrong attitude, Ayatollah Khamenei said, adding that the Islamic Republic complied with its commitments based on the Islamic teachings from the day one until a long period, but the other parties who did not abide by their obligations were these four states; thus, they should be held accountable for their behavior.

The Supreme Leader further said that such a behavior will make them more pariah in the eyes of the Iranian people.

He went on to say, the US withdrew from the JCPOA and other signatories to the deal collaborated with the Americans in this respect; so, the holy Quran teaches that the Islamic Republic must abandon the agreement, although, the respectful Iranian government did not relinquished the commitments, but it gradually scaled back parts of the obligations, which are reversible if the other signatories carry out their end of the bargain.

Meanwhile, the clown Zionist regime is permanently saying that they will not allow Iran to attain nuclear weapons; however, it should be said if the Islamic Republic had decided to attain atomic bomb, the Zionists and the bigger powers could not have been capable of getting in the way of the Iranians, he added.

The Islamic tenets are the ones that are prohibiting production of nuclear arms for the Islamic Republic, because any weapons including nuclear or chemical ones, which lead to death of people and destruction, are forbidden based on Islamic values, the Supreme Leader noted.

Recalling the massacre of more than 220,000 people following US atomic bombing of Hiroshima and Nagasaki in Japan during World War II as well as the ongoing siege of Yemen and daily pounding of markets, hospitals and schools in the war-torn country, Ayatollah Khamenei stated that the killing of civilians is the method of the Americans and Westerners, which is not acceptable by the Islamic Republic; therefore, Tehran does not think about nuclear weapons.

But the Iranian government is determined to have nuclear capabilities proper to the requirements of this big country; so, the level of uranium enrichment will not be limited to 20 percent and the amount may increase to 60 percent for nuclear propellants or other activities, he added.

The Supreme Leader also said that there is a multi-year contract between Iran and the six world powers and if they abide by their obligations, Iran will comply with its commitment; however, the Westerners are well aware that Iranians do not seek nuclear weapons.

Ayatollah Khamenei noted that the issue of nuclear weapon is a pretext, they oppose Iran’s access to conventional weapons, because they want to prevent Iran from attaining any kind of military might. 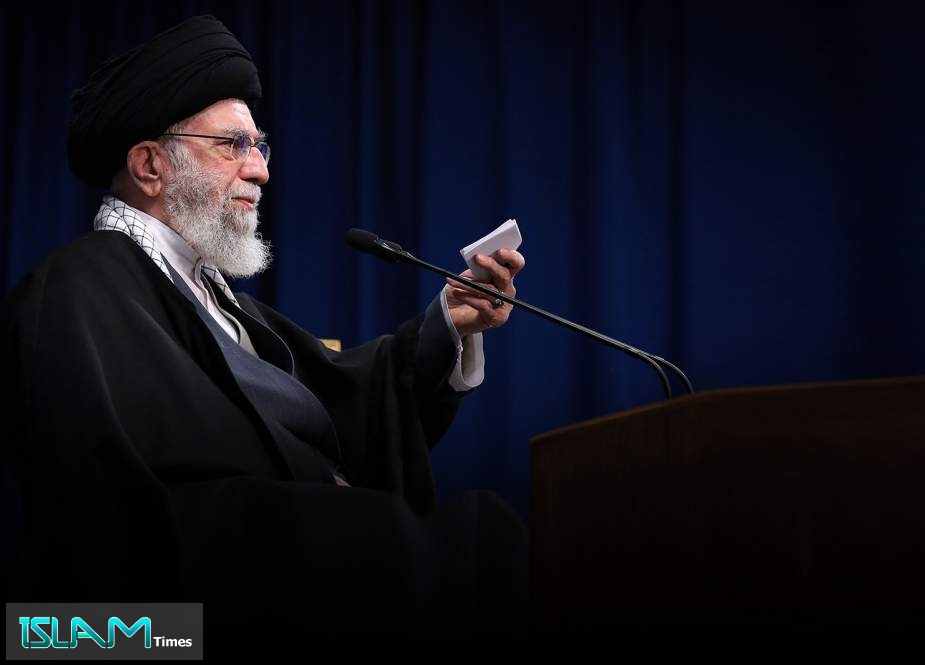