Story Code : 930151
Islam Times - Berlin authorities banned the annual demonstrations and marches on the International Al-Quds Day this year, the Jewish Telegraphic Agency reported on Friday.
The event, which has been taking place in the city since 1996, was slated for May 8, with some 2,000 people registering for it, including several Palestinian groups, according to local reports.

Millions of people worldwide take to streets yearly in events marking the International Al-Quds Day, in solidarity with Palestinian people.

The last Friday of the holy month of Ramadan, as it has been tradition since a historical decree by founder of Iran’s Islamic Revolution Ayatollah Khomeini in 1979, see activists express their solidarity with the people of Palestine in unique ways.
Share It :
Related Stories 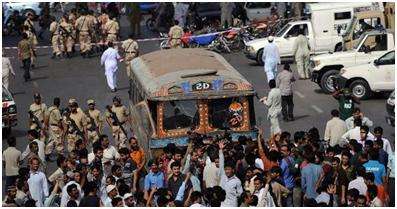