The Office of Leader of Islamic Movement of Nigeria (IMN) announced in a Twitter message on Monday that supporters of "Sheikh Ibrahim Zakzaki" staged daily protest rally, demanding the immediate and unconditional release of Sheikh Zakzaky and his wife Malama Zeenah.

This is while that since Zaria's tragedy in 2015, supporters of Sheikh Zakzaky have held peaceful demonstrations at various periods, demanding the release of the Sheikh and his wife. 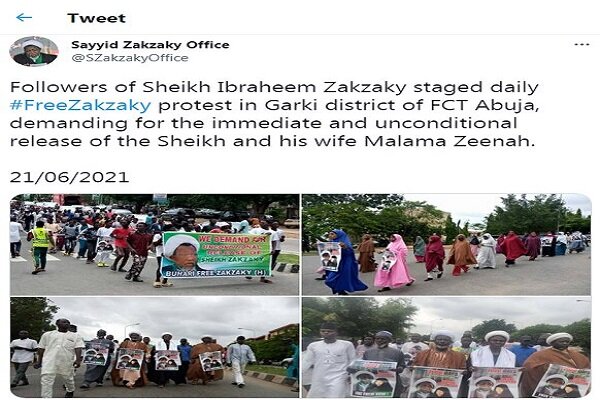 In 2015, the Nigerian army brutally attacked Hosseini mourners in Sahib al-Zaman Husseiniyah, killing about 2,000 mourners and transferring Sheikh Zakzaky and his wife to an unknown location after injuring them.

Following the attack of Nigerian army, Sheikh Ibrahim Zakzaky was severely wounded and lost one of his eyes completely due to the severity of his injuries, and his another eye was on the verge of blindness.