The Mujahids of the Bosnian War; terrorists or soldiers?

Story Code : 7814
The Mujahids of the Bosnian War; terrorists or soldiers is the title of a book written by General Hassan Afandich. This book describes the reality of mujahids from Islamic countries in Bosnia and the role they played. It also describes the positive role that forces from the Islamic Republic of Iran played in Bosnia. The author was a general of the war and he divided the mujahids that were present in Bosnia into three categories.
The first category: Real mujahids (Islamic soldiers). These people found their places amongst the people quickly and bravely fought. Some of them were blessed with martyrdom. They did not act in opposition to the Quran; they were not violent.

The second category: People who did not conform themselves to the rules of war and who used the battlefield as a place that they could benefit from. These people tried to present themselves as believers and force people to act in accordance to the Islamic commandments as in the Wahabbi point of view. They people quickly lost by their own actions.

The third category: Western (British, French, etc) agents who entered Bosnia on fake passports. They were paid by western governments. When they were asked to give in their passports they left Bosnia out of fear of being arrested.

The mujahids created people who, today, are their biggest adversaries. If the incorrect policies of Russia and western countries in regards to Islamic countries such as Afghanistan, Iraq, Iran, and Pakistan were not implemented we would not have seen mujahids such as al-Qaeda today. These mujahids and al-Qaeda are similar to Satan’s children who were raised by foreign entities.

After Afghanistan, Bosnia witnessed the Satanic elements of Al-Qaeda. In such a condition, Bosnia was faced by two realities: One, the genocide of Bosnian Muslims, the only European Muslims. Two, educated people being led to spread terrorism. The second scenario, the west was able to send trained people to Bosnia, under the banner of mujahids, so they could use the excuse of the international ‘War against Terrorism.’

Bosnia witnessed hundreds of unorganized mujahids. But, the attackers were abased because of the bravery of Bushniks and other Bosnian minorities; not because of these mujahids.

Also, they were successful and able to resist because of the aid given to them by Islamic countries, such as the Islamic Republic of Iran. Should the friendly relationship between Iran and Bosnia be rejected now? Or, should the policies of England, which was to destroy Bosnia, be rejected?

According to the reports of Bosnia’s foreign ministry it can be announced that Iranians performed what Imam Khomeini desired in the best possible manner during the duration of the Bosnian war. The Islamic Republic of Iran, throughout the war, gave enormous amounts of financial, spiritual, and political aid in order to defend Bosnia.

Iran was the only country who systematically sent soldiers to Bosnia and whose soldiers had precise commands. Iranian aid easily reached the hands of Bosnian citizens and aid was also given to Bosnian military training centers. Iranians had the experience of years of war and well understood that what meaning aid has. They also knew what problems a country faces while at war.

When one speaks in this manner it seems as if a certain group of people become upset. It seems as if they only want to rebuke Iranians.

Bushniks do not hide this reality. But, this aid was mentioned in very limited scopes. We must seriously appreciate the aid that Iranians gave to us, especially the fact that it was given in a brotherly manner without any preconditions or ridicule. They treated us honorably. 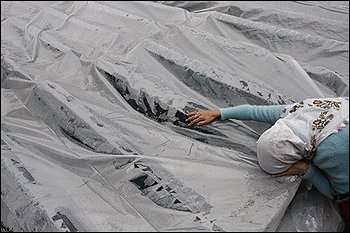 He is a solider of Italian carabinieri not a terrorist
00
Pentagon's No. 2 IG Official Resigns after Being Passed Over
French FM: Annexation of West Bank Cannot Go Unanswered
Recession Rate in ‘Israel’ Reaches 7.1%: Report
Iran’s 3rd Tanker to Enter Venezuelan Waters in Few Hours
Putin Announced Victory Day parades Would be Held on 24 June
Sayyed Nasrallah: We Are Preparing for the Great War When ‘Israel’ Will Be Wiped off the Map
Both Koreas Broke Armistice in DMZ Shooting: UN
Trump Fumes as Media Slams Coronavirus Pandemic Golf Outing
Iran Oil Tanker Reach Venezuela despite US Warning